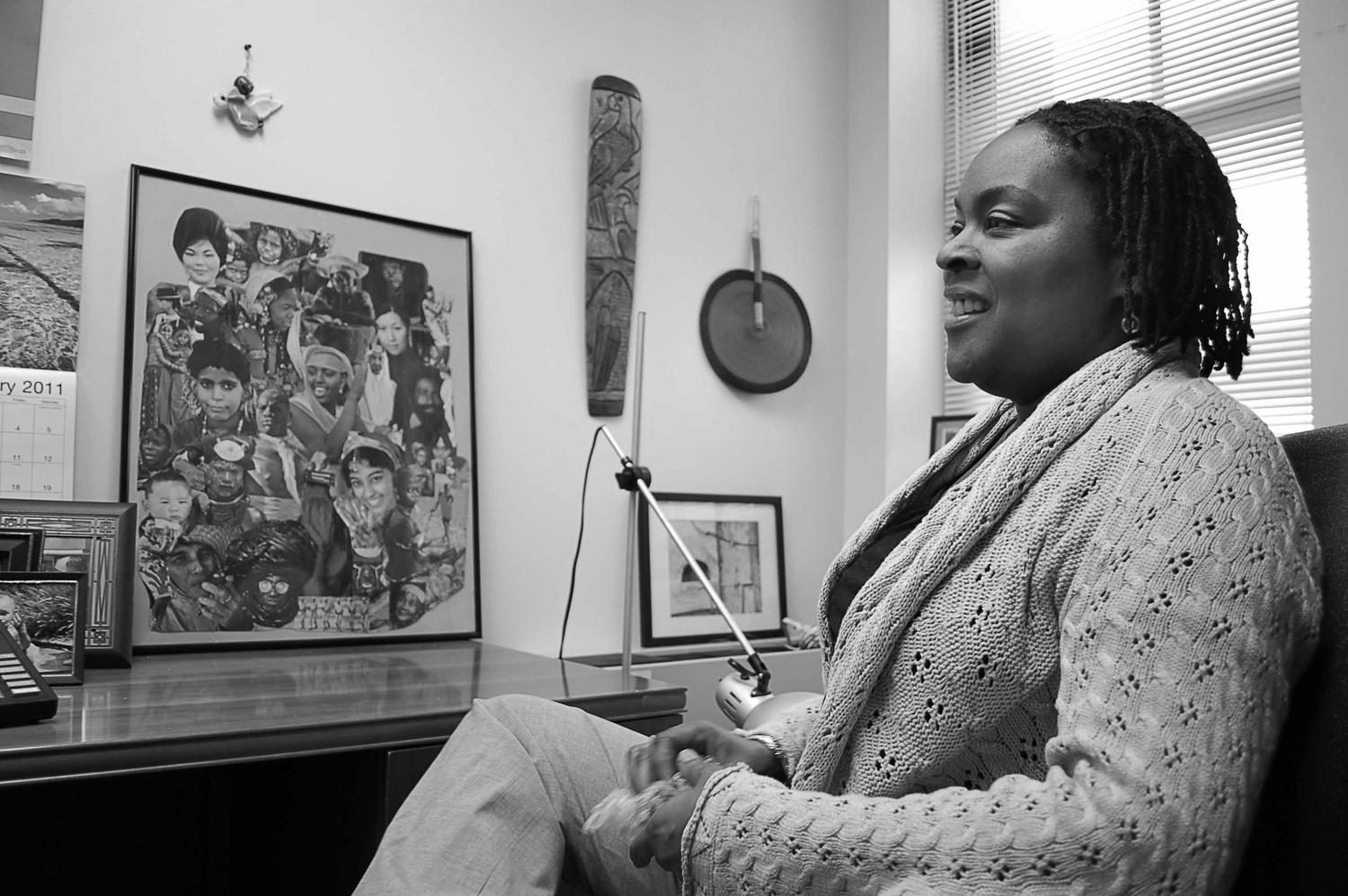 Chris Lewis
Open a newspaper or turn on the TV today, and the topic of racism is as prominent as it has ever been, despite the fact that open expressions of hatred have become relatively uncommon. Anthropology Professor Sabiyha Prince works to make meaning of this paradox: In her classes, she teaches about how power relations and historical legacies shape the contours of racism today. And in her research, she explores how DC’s African-American population approaches the demographic shift that is pushing black residents out of the city.
AWOL’s Chris Lewis spoke with Prince about her career, gentrification, DC history and what it all means for AU students.

A lot of your work focuses on gentrification, particularly in DC. Could you give a run-through of the storyline, for people who aren’t familiar?

There’s a history in this city of fluctuating demographics: African-Americans were a majority in the 1970s, when they reached highest numbers and then the population began to decline. That has been attributed to the desire of those who could to purchase homes in the suburbs but today people are leaving under less favorable circumstances. What we see now is that the cost of housing has gone up and unemployment has gone up. There has been this increase in inequality at the same time that we are seeing these demographic shifts and this alleged revitalization, and so I thought these were issues to start researching and talking to people about.

What are the findings that have surprised you during your research?

Some of the more surprising things are the history of DC because I’m a native born person, I’m from here but didn’t learn much about the history growing up. What’s surprising is the history of the DC communities when they were first developed. Researching this, I found out about parts of the city I had never heard of. There’s black Reno City that was located near Tenleytown and I didn’t know about any of that, because the information is not readily available.

I also learned a little bit about my own family history for my manuscript, my research and my book I’m writing. I interviewed my mother and I found out about my grandfather lived in Georgetown after he migrated here from South Carolina where he worked as a sharecropper. He was 17 and eventually returned to the south to marry my grandmother and bring her up to DC to raise their family.

Do you know what happened to Reno City? Is it like what is happening now in other parts of the city?

This area was demolished. The community went back to the 19th century but the way I understand it is that as Tenleytown became more affluent and populous, the white community put pressure on leaders to have black Reno City destroyed. I read one account that described it as a flourishing community with churches and voluntary associations. I think it reached its zenith between the 1930s and the 1950s.

This outcome is similar to the cases of the black communities of Georgetown and Foggy Bottom, and that’s what happens sometimes with gentrification and dislocation of African-Americans —it’s through the auspices of development and improvement. Like in Georgetown, there were key periods of legislation during the 1930s and 50s which determined the need to get rid of these areas, alleys or properties that were condemned.

Yes, and lower-income people don’t have the resources or access to services to pump money into improving their properties — and we are frequently talking about people who are working multiple low-wage jobs. Another important thing to remember is that politicians are not always honest about the processes. They may have one intention but frame it in another way because the alternative is more acceptable and palatable. So a desire could be, ‘We want these people to be gone. But we’ll do it using the argument that we want to make things better, we want to improve things and we want to improve their lives as well.’

Are there any recent cases that strike you as similar?

Hope 6 was a federal housing program designed to improve public housing conditions by demolishing the public housing and replacing it with other forms of housing to bring in people from various socioeconomic backgrounds. One explanation for this would be to avoid a concentration of poverty. That’s framing things in a way that says we are concerned, but the answer — rather than actually addressing poverty — is to remove or destroy the housing, replace it with something that’s much better and much nicer.

Then residents are told they would be able to come back into these communities, too. And so you will be able to benefit from the great changes that will happen—all this improvement, all this urban redevelopment.

Do the previous residents usually end up coming back after redevelopment?

The answer really depends on whether or not your children have broken the law. If there’s some sort of violation then families are not going to be allowed to come back. It can also rest upon the results of credit checks and it also depends on how much patience and wherewithal you have to go through a process that is so strenuous in terms of dealing with paperwork and constant meetings. This may not work for people who have jobs that don’t afford them the freedom to deal with all this bureaucracy.

These are the kinds of things I’m interested in documenting and getting at — people’s feelings and experiences — things a survey wouldn’t necessarily capture. Through in-depth interaction with people you realize that this public housing is a community and people have an affinity for it — and they had an affinity for each other.  Of course everybody in this environment, most people, are not involved in crime or involved in drugs. It takes a minority of people to do that and to destroy the safety and the integrity or reputation of the place. There’s a devaluation of poor people’s history and attachment to place.

Do you think AU students have a responsibility to know about this type of displacement that is happening in the city?

I think it’s valuable for all college students to know the history of the place where they are being educated. Students have a lot to juggle, and they are coming to a place that’s new and they’re not familiar with, so you would hope they have the curiosity to leave their campuses and go out and observe. But I think there needs to be something structural in place to facilitate their understanding of the place they’re in. Universities should have curricula that educate students about local history. It’s more important for us to help to create those opportunities, to challenge assumptions that students have, and really try to push their thinking forward, instead of clinging to antiquated ways or ideas that may be rooted in prejudice or stereotypes. So it’s a collective process; the onus isn’t totally on the student.

Is there any advice you would give to the student who is thinking about getting involved?

Informally, you can read the paper and find out what activities are occurring and what events are going on. You can go to the bookstore or the library and be aggressive about reading whatever history is available. You can get involved in a structured fashion through service learning. And you can do internships that target national organizations or grassroots organizations. There are a lot of things people can do to mitigate the separation between this campus environment and the broader local environment.

Lastly, what do you hope to see for the future of the city? And what do you have in mind for your future studies?

If I had my druthers, if I had power — which would be fabulous — then I would like to see the emergence of leadership that cares about everyone, leadership that doesn’t privilege people who have more access to wealth over others. There’s class inequality in this city, so to have somebody really care about that and grapple with the issues that are perpetuating that — that’s something I’d like to see.

I think that poor people do have the power on some level to come together and negotiate for a better life, whether it is through social movements, unions or collective action. There’s power there, and people are utilizing it. I think in the country as a whole we’re seeing a wider gap between people who have and people who don’t. I think that’s the trajectory we’re on and I’m not hopeful that will change because I don’t see a lot of people in mainstream politics or mainstream media advocating for the vulnerable populations.

And in terms of my research, I feel very grateful. I feel like it’s a privilege to have access to people and share their stories with others. I just want to continue to have that opportunity, to juggle my myriad responsibilities and to be a full, well-rounded individual as well.