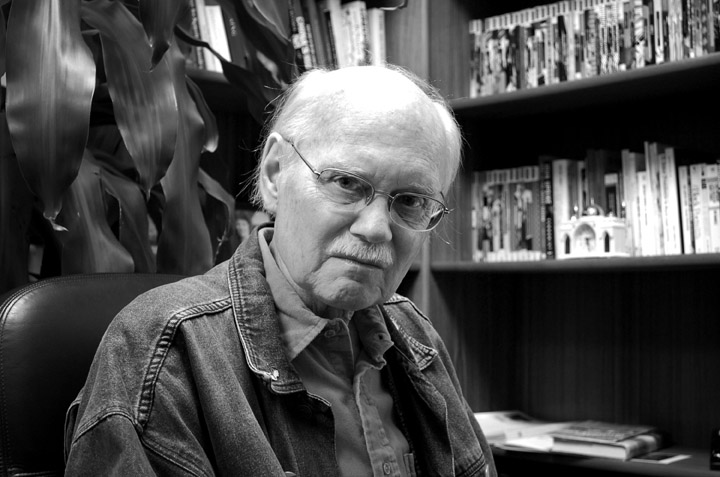 Chris Lewis
_AU’s second-longest teaching faculty member is retiring at the end of this year. Charles R. Larson is a pioneer in the study of African literature in the Western world. Chris Lewis, AWOL editor-in-chief and former Larson pupil, sat down with him to discuss his storied career. Next semester Larson will teach “The African Writer” — once the only African literature course in the United States — here at AU for the final time._

*Correct me if I’m wrong, but you were one of the first professors to teach an African literature class?*

I was the first person in the United States, possibly in the world, ever to teach a course in African literature.

*Can you talk a bit about that?*

Yeah, that happened because I had been in the Peace Corps in Nigeria from 1962 to 1964, returned, and thought that I was actually going to go to the Iowa Writer’s School for creative writing. I had been admitted to that program, but came back and, because of a series of things, decided that I wanted to get a Ph.D. in African literature. Well, there was no place that I could do that! There were no such courses. For reasons that I don’t think I need to explain, I came to American University because of some connections.

And then, when the General Education Program came in, I saw the opportunity to put three courses in, all that I taught. I was the only person who taught these courses for years: The African Writer, African-American literature and Third World literature. I taught them for about fifteen years, and then we finally found somebody who was African-American to teach the African-American literature course, and then I continued largely — with some help from some other people — teaching Third World literature and The African Writer, rotating those with occasional graduate courses and you know, other things. So that’s what I’ve done ever since.

*How do the African literature classes that you teach today compare with the early ones?*

The major difference is that the first course that I taught in African literature in the spring of 1965 — during the two years I taught at the University of Colorado — had people like Alan Paton, a white South African, in it, and had a novel by Joyce Cary, who is British. There wasn’t enough African literature to teach a whole course just with African writers. It was also a problem of the availability of the texts, which was extremely limited. Most of the works hadn’t been published in the United States.

*Did your interest in Africa start with your Peace Corps experience?*

Absolutely. I didn’t even know anything about Africa until I went there. Nothing. Have I told you how that happened? I was avoiding the draft. I’d been drafted.

For Vietnam. My draft board said they would not defer me anymore. They called me for military service. The Peace Corps was brand new, less than a year old. The Peace Corps had what you’d call a psychological aptitude test in those days, mechanically scored. That was how they determined if they would accept you for training or not.

I took that on a Friday afternoon in May of 1962, and on the following Monday the Peace Corps called to see if I wanted to go to Nigeria. I didn’t know where Nigeria was, but I said ‘Yes!’ and then I went to my draft board to ask them, ‘Will you defer me for the Peace Corps?’ And they said, ‘What’s the Peace Corps? We don’t know what it is.’ And I explained what it was and they said, ‘Well, we don’t know, we’ll have to think about this, discuss this, and we’ll let you know.’

And a week later, as I was waiting, they called and said, ‘Yes, we’ll defer you for the Peace Corps.’

*What did you do in Nigeria?*

I taught English in a boys’ secondary school in a remote area of southeast Nigeria.

*I remember you saying that this happened to be very near the area where Chinua Achebe, the author of the quintessential African novel Things Fall Apart, grew up?*

Yes, within about seven miles of where the actual town is that became the setting for Things Fall Apart. Now, I never met Achebe when I was in Nigeria. He was usually in Lagos or Ibadan where he was working as a journalist. And he’d already published Things Fall Apart, which I read just before I went to Nigeria. I had started reading Nigerian writers before I went to Nigeria as a Peace Corps volunteer.

I didn’t meet Achebe until some years after I got back to the United States.

*Though you and Achebe have a relationship that goes back a long time.*

We have a relationship that goes back, but it was complicated because in my first critical book, The Emergence of African Fiction, he didn’t like what I said about several things including some of his own writing. And so he sort of attacked me, and subsequently we met. We got over that, and we’ve been friends for 30 years.
*
Moving back to AU, obviously there’s a lot of interest in Africa here on campus, but much of it is more policy-oriented. For students who are interested in the political or economic side of Africa, why do you think it’s important to read books like _Things Fall Apart_ or _Nervous Conditions?_*

That’s the reason I’ve been teaching the course for almost 50 years: there’s no better way to understand Africa, which is still mysterious to most people, than by reading the novels of the writers from the continent, to a lesser extent the plays and the poetry. African literature has been so concerned with political, social, colonial issues. I mean, it has been more directly concerned than Western literature, and by reading those works you get really a first-rate entry into the cultures themselves. And if you’re studying Africa, it ought to be the cultures you focus on and understand.

*What is “the ordeal of the African writer”?*

Well, The Ordeal of the African Writer is the last critical book that I wrote, which is nothing but an overview of the obstacles that African writers have encountered from the beginning of their attempts to publish in Western languages. At the beginning there were no publishing houses in Africa. The writers had to send their manuscripts to Europe to be read by European editors who sometimes rejected books because they didn’t think that they had depicted Africa the way that the Europeans thought it ought to be depicted. There’s one celebrated case of an African writer having a novel rejected with the statement on it: “It’s not African enough.”

Part of the ordeal of the African writer is the economic obstacles that exist in so many African societies. Readers, even literate readers, have so little disposable income that they can devote to purchasing books that potential readers in those countries don’t buy books. Achebe’s Things Fall Apart sells 100,000 copies a year in the United States, and something like 2,000 copies per year in Nigeria. That tells the whole story.

*So considering the way African literature has changed, what do you now hope to see for the future of Africa?*

Well, what I hope to see for the future of Africa is that these economies that are so depressed improve so that the potential readers in the African countries can buy these books and read them. There was a time, right after independence in many African countries — Nigeria is a perfect example — when the economy was in pretty good shape, and when many, many Africans were reading works like Things Fall Apart. There was a time when Things Fall Apart sold 100,000 copies per year in Nigeria, but that’s all gone.

One of the things that’s changed since the early 1960s, when these countries became independent, is not just the literacy level and the disposable income to buy texts, but that there was a kind of tradition for reading that came out of the colonial schools, and now that’s also changed. That reading audience is not there in the same sense. It wants to read sensational Western novels if it reads anything, not works by African writers. It’s very, very difficult for an African to become a writer and live on his income. Black Africa, south of the Sahara, has four writers who can survive on their writing income. Four! That’s just microscopic.

I think all writers, no matter where they’re from, want to be read by the people they are a part of. I think Achebe would prefer to have his readers in Nigeria than in the United States. That’s what I would like to see change.