Students in McDowell Hall are reporting findings of mold in their dorm rooms, causing some residents to evacuate the building. 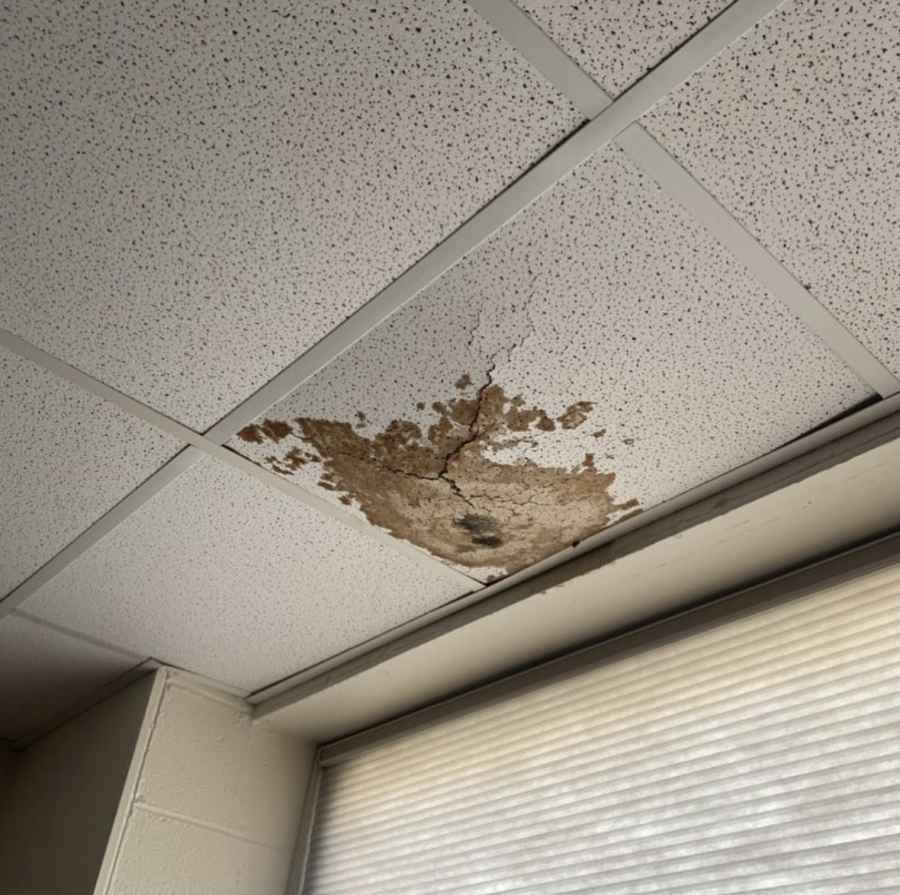 Two McDowell Hall residents cited in this story have chosen to remain anonymous. Their names have been shared with the writer and editors of this story to ensure their validity,

Students currently living in McDowell Hall, one of American University’s on-campus housing units, are filing reports of mold in their dorm rooms. The hall, which houses approximately 370 students, has been the focus of maintenance complaints from people worried that the mold is detrimental to their health. The talk has characterized life in McDowell, causing some residents to demand evacuation from the building.

“This is so frustrating,” said Grace Gao, a sophomore living in McDowell.

Gao repeatedly resorted to sleeping in her floor’s lounge to escape the humidity and musty smell caused by the rot. Gao is not the only one frustrated by the health and safety concern—in fact, it’s becoming a shared experience among many of the building’s residents.

Taylor-Jeffery Doone, a sophomore living on the third floor of McDowell, went door-to-door in mid-September collecting evidence of mold. His passion for investigating McDowell’s shortcomings arose from a close familiarity with the symptoms of mold toxicity.

“As a kid, I lived in a trailer from ’86, and it was infested with mold,” said Doone. “Every time I got an infection—say a common cold or the flu—I would develop bronchitis.”

After transitioning into better living conditions, Doone said he lived healthily without bronchitis for over six years—until he moved into McDowell. After contracting a cold in the first few weeks of his residency, Doone was diagnosed with bronchitis again and was prescribed steroids for his inflammation. He said the bronchitis is “certainly because of the mold.”

In an email sent by Housing & Residence Life on Oct. 6, the school reported that there has been no evidence of mold in McDowell Hall, “by both visual and suspected location air quality inspections.” When asked for comment, HRL directed AWOL to the university communications team, who provided a statement repeating that inspections done by “a third-party industrial hygienist team” found no mold. The communications advised students to reach out to 2Fix with concerns.

A survey conducted by AWOL showed that less than half of the students with mold concerns filed reports to 2Fix, but 90% of those who reached out to the response center indicated that they were unhappy with the help they received. The survey interviewed 40 students living in 8 halls on campus from Sept. 28 to Oct. 2.

In one instance which sparked Doone’s frustration with the university, 2Fix reportedly removed a rotting third floor baseboard from the hallway wall, leaving the moldy timber exposed to open air for two days and allowing spores to spread. According to him, after the two days had passed, “they just flipped it over and put it back.” He added that “you can see the pry marks from where they took it off” and the old nail holes remain visible.

Distrust and Frustration Among “Moldowell” Residents

Mold and mildew are not just AU-specific issues. It’s a cross-campus concern for many of the larger colleges in Washington, D.C, including Georgetown University and George Washington University. AWOL conducted the same mold survey on students at GW, finding that 64% of students who contacted their maintenance staff with mold concerns were satisfied with the solutions provided, compared to only 10% of AU students who could say the same about 2Fix.

“Mold is not a new issue for colleges,” says Nancy Ching, a sophomore Honors Program resident in McDowell. “Schools deal with it in different ways, and the fact is that American wants to pretend it’s not there instead of doing anything.”

Ching, Doone, Gao and other students interviewed about the mold voiced frustration with the university administration’s apathy, saying they felt hopeless. In an attempt to draw attention to the significant amount of mold in the building, Doone started an Instagram page named @moldowell, which features various images of fungus in the residence.

After being told repeatedly by the Residence Hall Association that McDowell lacks sufficient evidence of mold to launch an investigation, Doone felt that the school administration is “actively ignoring issues that concern student health.”

“The university is lying to us,” said Doone.

These issues are not exclusive to McDowell, although a majority of current mold complaints originated in the hall. AWOL’s survey collected reports of mold in at least seven of AU’s residential halls. More than three-quarters of these reports come from the lowest-priced buildings on campus.

Many students who sought out affordable on-campus housing this semester now worry the decision is expending their health. Residents in McDowell worry that the mold may be irritating their throats, noses and eyes.

Out of the surveyed students who agreed that the situation is impacting their respiratory systems, 47% reported developing a dry cough. Thirty-eight percent of students reported sore throats that worsened after one night. For others, their illnesses included congestion and wet cough.

AU policy places financial strain on students who seek to maintain their health. According to the university’s website, students who wish to leave on-campus housing must pay a fee of $1000 or more. McDowell houses students in the second-year Honors Program and Community-Based Research Scholars, many of whom depend on scholarships to finance their education.

“They’re effectively holding people hostage,” says one McDowell resident who requested anonymity. “They won’t pay to fix it, and we can’t pay to get out. They have no financial incentive to help us, so they won’t.”

The Curious Case of Room 4XX

In the case of two residents on the fourth floor of McDowell (who chose to remain anonymous), both 2Fix and HRL neglected to resolve a mold complaint that the two roommates have been struggling with since week one of the 2021-2022 school year. 2Fix and HRL repeatedly pushed the problem between each entity, the two said.

The roommates contacted 2Fix on Aug. 31 about a smell emanating from one roommate’s cabinet. But repeated requests over the next few days to take care of the issue went unanswered by 2Fix and HRL.

2Fix was supposed to conduct a mold test on the room Sept. 7, but the residents couldn’t find any record of the test being done. A test was finally done a week later.

“It came back negative, but when we moved back, the smell was the same. It’s really bad—you notice it the second you walk in,” said the McDowell resident.

The residents said the whole process was “insanely stressful.”

“It’s really sad because [McDowell] is some of the only really affordable housing on campus,” said one of the roommates. “So the fact that it’s impacting the low-income students that go here, I think, speaks volumes to what demographic of students AU actually cares about.”

A Familiar Sense of Urgency Spreads

For students from low-income areas, executive apathy regarding wellbeing in their communities has been a constant worry since the start of the pandemic.

“We need to prevent people from getting hospitalized by this,” said Doone. “What if I get [COVID-19]?”

Added onto pre-existing respiratory inflammation, the well-known risks of contracting the virus leave the vaccinated student population vulnerable to break-through cases. The importance of addressing this issue was highlighted by the University of Maryland’s 2018 outbreak of Adenovirus—a disease caused by mold—which resulted in the death of UMD student Olivia Paregol.

According to a 2018 article from ABC News, mold toxicity has been an ongoing concern at AU for over two and a half years. The article features images of rotting wood and tile from Letts Hall, a first-year residency, and cited student concerns of flu-like symptoms. The university faced a similar problem in the Battelle-Tompkins building in summer 2019, where mold was reported to have grown in the heat and absence of professors.

Taking Matters into Their Own Hands

The longevity of the mold issue is cultivating a sense of urgency among McDowell residents, many of whom agree that it may be time to bring in an outside authority.

“I honestly think now is the time,” says Doone.

In a recorded interview Doone conducted with the Director of Housing, Ryan Cohenour, the director told a group of McDowell residents that the school requires a “tangible document and more evidence” to move forward.

Nelson Martinez, another certified mold assessor listed by the DOEE, said of the situation in McDowell: “That is considered mold growth…A smell is proof of active growth.”

Martinez went on to explain that, according to Washington law, residents engaged in a landlord-tenant style agreement can pursue reimbursement of their housing agreement if a mold complaint is left unanswered or unrepaired after seven days.

“You can start a legal process,” said Martinez.

While AU and 2Fix continue to fail at providing an adequate response to the mold, the legal route appears more legitimate to McDowell residents.

“Just because some of our peers aren’t sick now doesn’t mean they won’t be later,” remarks Doone. “I just want to do something.”

Correction: An earlier version of this article incorrectly stated that HRL did not respond to requests for comment from AWOL. HRL directed AWOL to the university communications team, who provided AWOL with information about the university’s response to reports of mold in McDowell Hall.