Climate Activism on a Virtual Campus 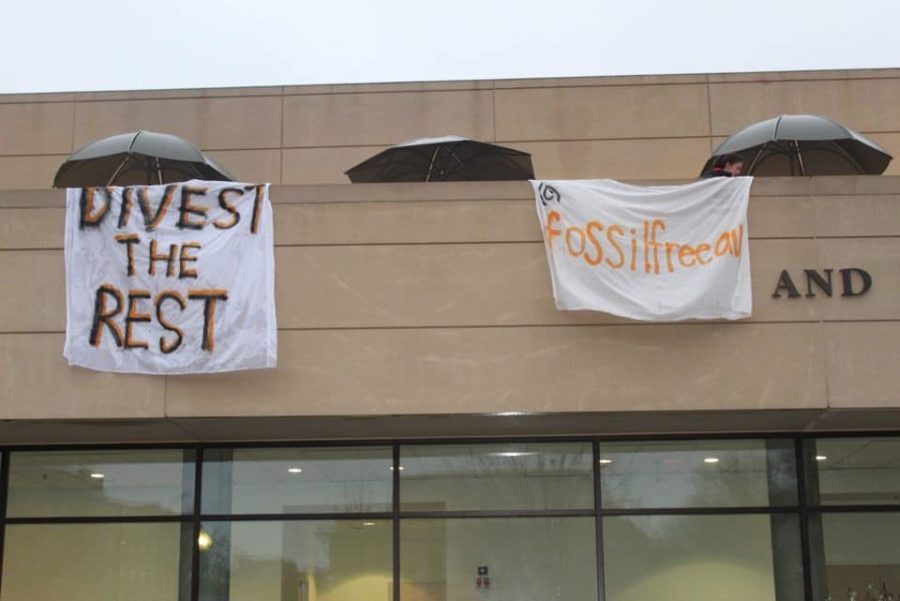 On Earth Day 2020, American University sent out an email revealing its plan to take all its investments out of fossil fuel companies. Haley Epping, a senior who had spent four years campaigning for the university to divest from fossil fuels, read the announcement alone in her room at home in upstate New York. Celebratory texts went back and forth between students who, just weeks earlier, had been sent home from campus because of the COVID-19 pandemic.

Exactly one year before, Epping and other activists in Fossil Free AU were standing out on the quad while more than 200 other students signed a banner to support climate justice. On Earth Day 2020, Fossil Free AU activists finally achieved the victory they had campaigned for since the group’s founding in 2012. There were no gatherings on the quad. No banners. No hugs.

“I was just like sitting there, and I was like, ‘Oh my god, how exciting, but I can’t do anything,’” Epping said. “It was pretty frustrating that we couldn’t have that like, big moment of like, ‘we won!’ I think it’s just hard to show the support virtually. It was almost like, there wasn’t a moment. If we were on campus, it’d have been like a big rally or something.”

Since last spring, the organization has had to continue their fight against climate change virtually. The same is true for Sunrise AU, a newer hub of campus environmental activism founded just under two years ago. After more than a year of almost wholly digital work, the two groups have planned an in-person action to take place outside a Chase Bank in Tenleytown this morning. A small number of students from both Fossil Free AU and Sunrise AU will gather to show support for indigenous groups who are fighting against Line 3 – an oil pipeline expansion that would run through native lands, primarily that of Anishinaabe peoples in Minnesota. The project was proposed by Canadian energy company Enbridge, in which Chase Bank invests.

“This is like a protest sort of, but I’m calling it more of a rally or an action,” junior and Sunrise AU founding member Suzy Pranger said, speaking from outside her home in Utah. “It’s not just protesting the investments of the bank and their complicit nature with the project, but also standing in solidarity with water protectors. So we’re going to be not only taking up the time and space of the bank, but also holding space for the people that are fighting on the front lines.”

In order to meet social distancing guidelines, the in-person action will only include around 10 activists. The following week, Sunrise will also lead a virtual letter writing campaign urging disinvestment from Enbridge and a social media “resource drop” with information on how individuals can begin their own personal divestment from big banks.

The Line 3 expansion would bring about 760,000 barrels of tar sands oil per day through 330 miles of new piping stretching from Alberta, Canada to Superior, Wisconsin according to a summary of the project on the Minnesota government website. But national activists argue that the pipeline would cut through indigenous lands, violating the treaty rights of Anishinaabe peoples.

Just weeks ago, Enbridge was in the news for failing to properly investigate and report about a 2019 spill from one of its pipelines in Wisconsin according to Wisconsin Public Radio’s Danielle Kaeding. Native American activists have been fighting to stop the expansion since its proposal in 2014.

The idea to set up a demonstration in support of indigenous Line 3 protesters was Pranger’s initially, but Sunrise’s “distributed leadership” model has allowed many different members, including new freshmen, to take part in the planning.

“Our leadership structure reflects the challenge of climate justice, and a challenge which affects all of us requires a solution that has input and leadership from everyone,” junior Elliot Williams, another Sunrise AU activist, said. “It creates really strong relationships between the people organizing.”

In addition to crafting strong relationships among its own members, Sunrise AU puts a heavy emphasis on coalition building with other organizations, and it has close ties with Fossil Free AU. Pranger was deeply involved in Fossil Free AU throughout her freshman and sophomore years, which has helped foster smoother communication between the two groups. Many members of Fossil Free AU are also part of Sunrise AU’s Slack workspace, the digital communication platform the organization uses, even if they aren’t active Sunrise members.

“It was easy to navigate because of Suzy [Pranger], because she was in Fossil Free and Sunrise,” Epping said. “We are all focused on climate justice, but they [Sunrise AU] have very specific goals, more of like the Green New Deal and focusing on the government as a whole. Versus, we are very focused on American, on the university side of it. So we work well together, and we have very similar tactics.”

These tactics include holding trainings on activism and leadership for their members, hosting educational events to spread the word about climate change and direct action protests in public spaces.

Before the pandemic, Fossil Free members wrote chalk messages about AU’s fossil fuel investments all along campus walkways, held a protest outside of a board trustees meeting and hung a huge banner on the Katzen Arts Center.

After officially launching in the fall of 2019, Sunrise AU hosted a teach-in about environmental justice, held a leadership training and participated in civil disobedience actions such as blocking streets and joining strikes, often in conjunction with the larger Sunrise DC chapter or other schools’ campus hubs.

The last in-person demonstration for Sunrise AU was in September. A few members still in Washington for the fall online semester joined other Sunrise activists from hubs at Georgetown and GW for what the movement calls a “wake up action.” As the name obliquely suggests, these protests involve chanting and singing outside of politicians’ homes early in the morning as a literal wake up call to take climate change seriously.

“It was great, because we had been online for a good amount of time before then, you know, we’d been in the pandemic for about eight months at that point, and it was – it felt very discouraging, and the movement just felt like it was slowing down,” Pranger said. “We get there at 5 o’clock; it’s so dark out. We’re all wearing our Green New Deal shirts, and slowly, people just start coming. And there’s members that were in the Slack, that were new, that I hadn’t met yet but I’d been talking to over Slack. And so it was almost like a physical representation of community, like kind of coming together. And then all of a sudden, it was just like this mass of people, really angry that no one was paying attention to something we really cared about – climate change – and we marched to Senator Feinstein’s house.”

Since then, activism for both Sunrise and Fossil Free AU has been fully online. Activists from both groups described the difficulty of building enthusiasm and momentum in the face of students’ Zoom fatigue. And planning an action involving two separate organizations without ever being able to set foot in a room together has also presented challenges.

“The biggest struggle is probably working with Fossil Free, but not because they’re Fossil Free,” Pranger said. “Coalition building online can sometimes be very difficult.”

But the slower pace of an online year has also offered some useful breathing room for both groups. Because Sunrise AU had only started the previous school year, the group has used this time to reorganize their organizational structure. Their Slack workspace has over 100 members in it, so different teams working on specific projects have separate channels and group chats.

“We’ve had to adapt a lot; it’s been difficult seeing people get confused over things that we’ve put together,” Williams said. “That’s been the hardest part for me, but I’ve learned so much from it. So I think, you know, it’s going to make us a stronger group in the end.”

Meanwhile, after last spring’s big divestment victory, Fossil Free AU has used this year to research other universities’ interactions with their boards of trustees, as well as ways to ensure AU uses the funds pulled out of fossil fuels to reinvest in ethically sound ventures.

“We’re focusing on demanding that the board is more transparent with their finances,” Epping said.

Daniel Rueda is one of the student activists on Fossil Free AU’s research team. Inspired by other students he worked alongside in supporting Bernie Sanders’ 2020 presidential run, Rueda started working with Fossil Free AU just this past fall from his home in Florida.

“I’ve never really met these people in Fossil Free AU in person, for the most part,” Rueda said. “I do connect with them very well virtually, but in person – that’s going to be so much better. I’m looking forward to it.”