Stacey Abrams kicks off Founder’s Week with a zoom webinar

The voting rights activist discusses her path and voter’s rights, concluding with advice to students 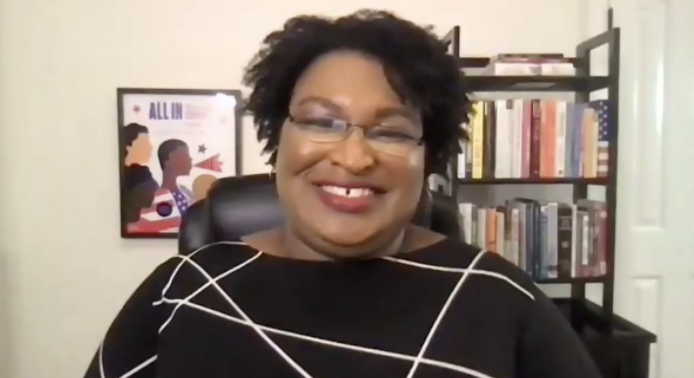 The conversation opened with a question pertaining to a comment made in Abrams’ 2019 spring commencement at AU’s School of Public Affairs: “to not edit your desires.” Abrams talked about her background as the former minority leader of the Georgia House and founder of the voter’s rights organization Fair Fight.

She included that as a child her parents would take her with them to vote and that she set up her first voter’s registration table when she was in college. Both events led her to the path that she walks on today.

She then highlighted the importance of not being constrained by the lack of formal titles, saying she accomplished her dreams without ever having become governor.

“And so for students, it’s trying to make sure that you’re constantly checking yourself against your desires and your goals and versus the titles that people tell you, you need to have in order to make them real because often they’re completely wrong and they’re not at all connected.”

Abrams also talked about her belief about the state of voter suppression in the United States, citing her 2018 gubernatorial election that she said suppressed 1.4 million Georgian voters.

“I don’t believe in voter apathy, I believe in voter despair, and my responsibility in the work of Fair Fight is to at least pull away one of those vestiges that has made despair so permanent,” Abrams said. She also encouraged the Biden Administration to be a part of these efforts.

Abrams then stressed the importance of elected officials to stay away from converting those with different political opinions.

“I’m not going to encourage my party to spend all of its treasure, trying to convince people who, who have diametrically opposed belief systems to try to convince them,” Abrams said.

She also said that it is essential to have a team with you, whether it’s politics or not.

Freshman Abby Sharkis, who attended the event, appreciated this sentiment.

“I thought it was interesting when she talked about making sure when you do something you always do it with someone else,” Sharkis said. “A lot of people want to do it by themselves and think it makes you more impressive.”

Abrams concluded the event by offering “words of wisdom” for others to get started on their own political advocacy paths. The first guiding principle Abrams offered was to pick one issue to focus on that you’re most passionate about.

“Make sure you’re not creating your own thing simply because you think you’re the first person to think of it,” Abrams said.

If you’re not seeing action from the already existing organizations, then create something of your own, Abrams said. She emphasized the difference between change and action: change takes time but action is continuous.

“I’m not optimistic or pessimistic. I’m determined,” Abrams said. “And determination doesn’t have an endpoint. And it’s not buffeted by whether the winds are good or ill, it simply adapts to what is to make what will be and what should be a reality.”