Students for Justice in Palestine leaders reflect on virtual semester

Student leaders for AU’s chapter of SJP successfully organized an online event, in spite of censorship concerns and virtual constraints. 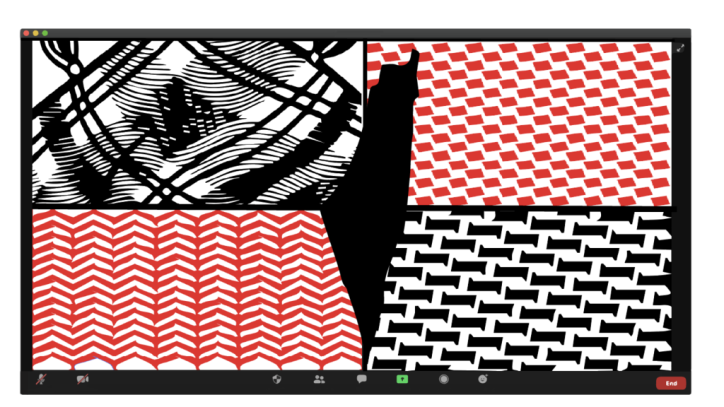 Aqsa Rashid and Kiran Waqar — two AU juniors who lead Students for Justice in Palestine  — spent much of the Fall semester organizing an Oct. 29 virtual event which hosted Rabab Abdulhadi, a professor of Arab and Muslim Ethnicities and Diasporas out of the College of Ethnic Studies at San Francisco State University.

The event, which was held on the virtual platform Microsoft Teams due to concerns about censorship, was co-sponsored by 13 student organizations and two academic departments.

“Alternative platforms have their constraints,” Irene Callis, Critical Race, Gender and Culture Studies professor and faculty advisor for SJP said in her introduction of Abdulhadi. “But these are less important than our will to collectively hold private tech giants like Zoom to account in censoring what we teach about and who is allowed to speak,” she said.

Abdulhadi’s invitation to speak virtually at AU came on the heels of an event at San Francisco State University that was canceled by Zoom Video Communications Sept. 23 over the participation of Palestinian activist Leila Khaled. Khaled is a member of the political party and resistance group, the Popular Front for the Liberation of Palestine, or the PLF, which the U.S. government designates as a foreign terrorist organization.

Numerous pro-Israel groups put pressure on both Zoom and San Francisco State University to cancel the event, citing concerns about public funding being used to give a platform to Khaled, who hijacked two planes in 1969 and 1970.

“This sets an important precedent, one that is only possible in a climate that already normalizes the silencing of Palestinian voices: business as usual,” Callis said.

For SJP’s Rashid and Waqar, the discussion of Palestine is indivisible from larger discussions of injustice.

Abdulhadi attributes the controversy surrounding her Sept. 23 event to the difficulties inherent to speaking about the Palestinian cause.

“The whole discussion of Palestine as part of the indivisibility of justice becomes a serious problem,” Abdulhadi said, speaking to the dissonance that fuels calls for justice that except Palestine.

Beginning with a land-acknowledgment statement for San Francisco State University’s campus — which sits on Ohlone people’s land — Abdulhadi went on to discuss both the cancellation of her open classroom event as well as the emotional and physical toll that activism can come to take.

Zoom spokesperson Andy Duberstein told The Intercept by email that anyone was welcome to the platform, so long as they did not violate “applicable U.S. export control, sanctions, and anti-terrorism laws.” Duberstein also noted that Zoom reserves the right to bar anyone from using its services, for any reason or none at all, citing its terms of services.

“All of these clubs have a connection to Palestine,” Waqar said. “Part of the reason that the co-sponsorship list is so big is because Palestine is really a case of cross-solidarity, it’s a case where we can take care of each other.”

While the virtual semester has presented many challenges, Rashid explained that it has also enabled them to collaborate more freely with other student organizations.

“I think that this virtual semester is letting us work with these groups,” Rashid said. “But part of it is because we’re also friends with these people…there’s that kind of trust, there’s that allyship that just comes from literal community.”

Rashid and Waqar joined SJP as freshmen, right before the club would undergo a series of major changes.

“Sophomore year we were like okay, let’s try to actually revamp this club,” Rashid said.

But after working to reaffirm SJP’s place on campus, Rashid and Waqar faced the challenge of leading their club in the midst of a pandemic. Following AU’s transition to online learning last March, Waqar returned to her home near Burlington, Vermont, and Rashid to Northern Virginia, from where they maintained both their work partnership and friendship through virtual means.

“On Saturday we called for nine hours,” Rashid said, laughing as she recalled the virtual meeting. In addition to their positions as co-leaders of AU SJP, Rashid and Waqar both serve on the Muslim Student Association’s executive board and are co-leaders for AU’s alternative break trip to South Africa, planned for the Summer of 2021.

Rashid and Waqar, who are both Pakistani, noted that they don’t have any material connection to Palestine.

“We don’t have any claim to the land and whatever else but it matters to us because it’s a case of injustice,” Waqar said. “Why else would we care?”

Rashid has come to view SJP as a space to explore a topic that isn’t welcomed in the classroom.

“The number of co-sponsors demonstrates that there is interest to learn more, that students do want classes like this and spaces like this that connect these issues to each other.”

Rashid and Waqar agreed that they have drawn inspiration and fuel from other student organizations this semester, despite the pandemic.