AU without the PD: looking to the past to change the future of policing on campus 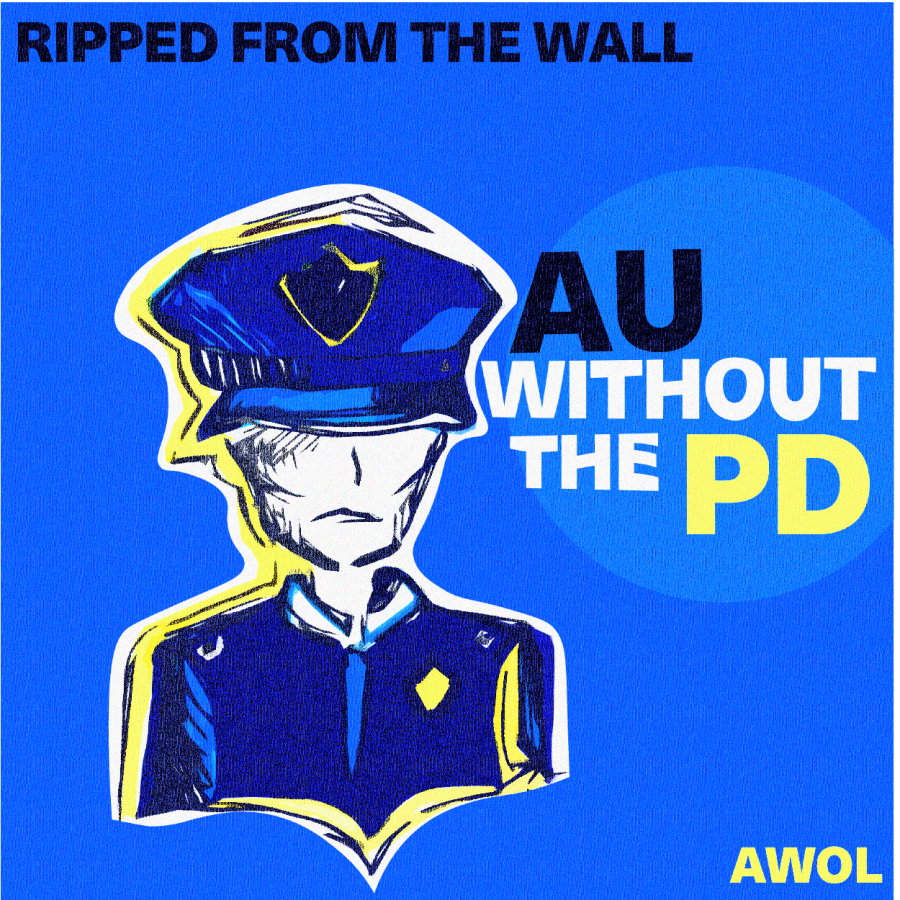 The following is an abridged version of this semester’s episode of Ripped From the Wall, AWOL’s investigative news podcast. To listen to the full version of the story, including additional interviews and narration, you can listen to the audio file below, find it on Spotify, or download it wherever you find podcasts.

After a summer of protests condemning police brutality and demanding accountability and transparency from law enforcement, students are calling on the American University Police Department to make significant reforms to better serve the AU community.

This semester, AWOL’s investigative podcast unit, Ripped from the Wall, looked into the current relationship between AUPD and students, the changes the AU community is hoping to see and the department’s perspective on their own role at the university.

AUPD has received harsh criticism from students over their policies of wellness checks, their presence in dorms for student conduct offences and most recently for their continued relationship with Washington D.C.’s Metropolitan Police Department.

For many students, although AUPD’s presence is always noticeable on campus, their actions, policies and even basic procedures are more ambiguous.

Ryan Deitsch, a sophomore and survivor of the Parkland high school shooting in 2018, said just weeks ago, six potentially armed police officers entered his apartment without warning to conduct a wellness check. Deitsch had informed a professor and the AU counseling center he was undergoing a mental health crisis, and said it unclear why AUPD showed up at his door when he had an appointment with the counseling center the next day.

“AU says it’s their official policy that the counselors at the counseling center cannot have in person meetings due to health risks, but AU at the same time through that very policy allows themselves to send officers to your door if they have reason to believe that you need to be conducted under a wellness check,” said Deitsch. “That, to me, seems like an absolute hypocrisy for the reason that they’re allowed to send an authoritative force but not a therapeutic force, that, to me, is the core of this issue.”

AU Junior Gabriella García-Astolfi had an experience where a friend of hers drank too much, to the point she could not even swallow water anymore or hold her head up. She said she debated even making the call to AUPD for assistance and a potential for about 10 minutes because of her knowledge of the department’s recent history.

“I thought of Gianna [removed] earlier in the year, and how, you know, someone called a mental health check on her and she ended up being completely mishandled by the police in such a horrible way,” García-Astolfi said.

She said the two officers that arrived on the scene were Black women, which made her feel safer, but that she was still “anxious” and “on guard” when the officers were present. More importantly, to her, she said she felt that they didn’t actually help her friend in that situation.

Deitsch said his perspective of AUPD, along with his past traumatic experiences with police, made him immediately wary when they arrived at his apartment.

“AUPD did not harass me physically, but they have other students, and that’s something that should not be happening … It should never be in which, if a student is in crisis, that they are dragged out by their arms and legs by up, that should not be the case, but very much it’s happened,” said Deitsch “Knowing that it’s happened means that it could happen again, whoever’s in charge of AU policy needs to immediately correct it to ensure that wellness checks are conducted primarily under therapeutic means.”

Just last year, a Black student was forcibly removed from her American University-owned apartment by six police officers, some from AUPD and some from MPD. The protests that ensued demanded changes to AUPD policy, and were echoed in light of the racial justice movement over the summer as student groups from AU NAACP, AU Black Student Union and  American University Student Government demanded change from the department for its past behavior.

In a recent joint statement from AU NAACP and AU BSU, the organizations said they were still negotiating with the university but had experienced delays due to COVID-19.

“Our most immediate goal is to remove AUPD from the wellness check process. While our conversations have been productive we have ran into roadblocks regarding the legality of who can facilitate wellness checks and where licensed therapists are and aren’t allowed to practice,” the statement reads.

Traci Callandrillo, assistant vice president of campus life, said in an interview that her work at AU has focused specifically on a “critical incident response model” to train AUPD officers for addressing mental health crises.

She said in the past, when a student had a crisis, MPD would respond with an ambulance, a firetruck and police officers, which could exacerbate the situation and make it worse.

“We didn’t have control over that, because that’s what had to happen in order to get that person safely transported,” Callandrillo said. “But that’s what it would have looked like in reality for a student, everybody at the university was doing everything what we could to get them safely transported. That’s a huge thing, though, when you’re the student.”

She said MPD policies in place now allow for more personalized approaches when dealing with a mental health situation. For instance, Callandrillo said when a student needs to be transported to the hospital during a mental health crisis, officers may receive permission to collect necessities from the student’s room, like backpacks, clothes or toothbrushes.

In an interview, Vice President of University Police and Emergency Management Philip Morse said he believes the department is “very transparent and accountable” both to students and the Washington community as well.

“We always like for the students to understand that the police departments are a fabric of the university, and that our accountability is not unlike any other staff or faculty or student here,” he said. “We follow the same rules that everyone else does, and we’re even held to a higher standard because of what we do. And that’s very, very important as well.”

Morse said in response to protests over the summer, AUPD met with students to learn about their perspectives on police and how to rebuild trust going forward.

“This summer was a restorative justice conversation, led by university administrators, and really bringing the police department together with students in what was a very safe environment and one where we could talk candidly with each other,” said Morse.  “The most important piece of communication that can take place was listening and understanding and really hearing people’s concerns and what’s bothering them, and giving explanations of things that they may not have been aware of.”

While Deitsch said the individual police officers and administrators at the university are not to blame for his situation, he said AU policies need to change.

“I don’t think anyone at the university has the goal of triggering PTSD of students in trying to conduct wellness checks,” said Deitsch. “So how do we reconcile AU policy, the idea that they want to be there, they want to be supportive, they want to be able to provide the resources they have at their disposal for the students in crisis? And how do we reconcile that policy with the reality that it is officers abruptly showing up at your door? Those two things don’t end in the pinnacle of health, they just don’t.”

Recently, newly elected Class of 2024 President Stevie Early said that while police abolition may not be a goal of her class, they are definitely interested in reform.

“I don’t think that will necessarily be able to actually abolish [AUPD],” said Early. “We don’t need AUPD as much as we use it, that means expanding the counseling center so that police no longer work with the mental health check, having a counseling center taskforce that should consist of people who know how to deal with disabilities, they should have people of color ,LGBT people like a diverse task force, so that it applies to all the people who go to AU.”

Early said students themselves need to take responsibility for making that change happen.

“I think it’s time that we recognize that as students, this is no longer high school where we have to listen to teachers or else we go to the principal,” Early said. “It’s time that we recognize that petitions help, talking to each other helps and we’re able to make a change. American University without students, it wouldn’t exist, so it’s time to no longer be afraid of taking action.”

This story has been updated to correct the misspelling of Traci Callandrillo’s name.

Shannon Durazo (she/her/hers) is a senior studying journalism and women and gender studies.