Protesters say the director neglected her duties by allowing for inhumane conditions in the District’s public housing and homeless shelters. 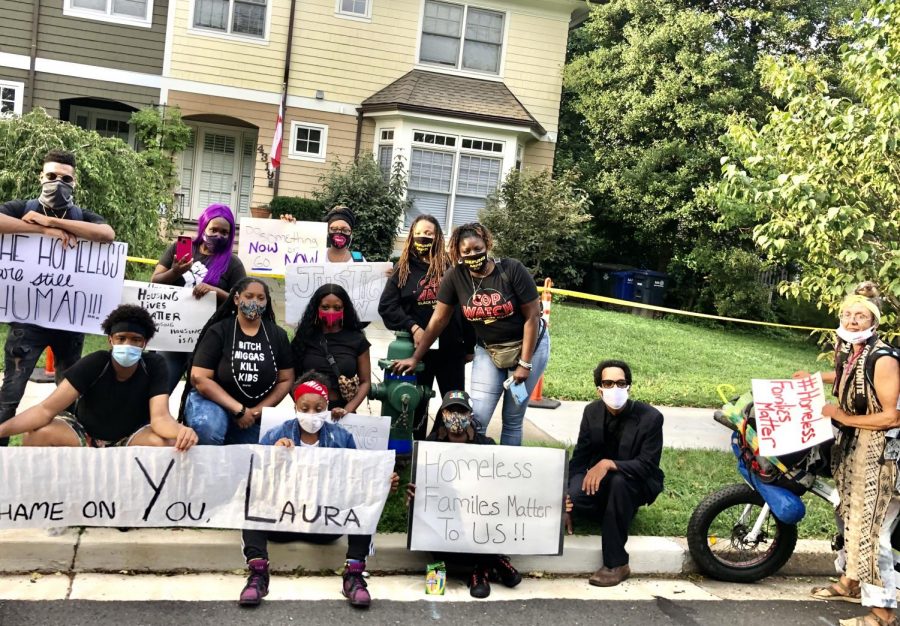 Activists and community members gathered in front of the home of D.C. Department of Human Services Director Laura Zeilinger on Saturday, calling for her resignation over the quality of services provided to the people without housing in Washington.

A number of picket signs held by demonstrators depicted images of rats, mold and collapsed ceilings in public housing units.

“These places have the same conditions as the homeless are subject to when they are being forced to defecate in the streets,” said Kevin Cramer Jr., co-founder of the Palm Collective, a Black-led organization that seeks to put an end to systemic racism through collective action. “That means someone is choosing not to do their job.”

Jewel Stroman, a former commissioner candidate for Ward 7’s Advisory Neighborhood Committee and local homeless advocate, organized the event. Approximately 30 people attended the hour-long protest in front of Zeilinger’s property, who was not home at the time of the demonstration.

Several demonstrators alleged that some MPD officers overseeing the gathering refused to disclose their badge identification numbers when asked.

MPD officials have yet to respond to multiple requests for comments on this allegation.

Demonstrators said they were protesting the quality of services provided to the people without housing in the District, and they called for increased affordable housing and improved conditions in homeless shelters and pre-existing rapid rehousing dwellings.

Rapid rehousing is one of the subsidized housing options that the District provides where individuals experiencing homelessness are placed in market-rate apartments and receive rental assistance for up to a year.

City leaders have been criticized for the poor conditions of rapid rehousing in the past. In 2016, the D.C. Department of Human Services partnered with Sanford Capital, a property management company, to provide shelter for 170 families and 235 individuals, according to the Washington Post.

The Legal Aid Society of the District of Columbia filed 32 claims on behalf of individual tennents for Sanford Capital’s neglect of its properties and reached a settlement of $1.1 million with the company that will be distributed to rapid rehousing tenants.

Activists said that residents are still being exposed to dangerous and inhumane conditions while living in rapid rehousing units provided by the city government after the settlement.

Organizers of the protest blame Zeilinger.

“Laura is the one that makes the decisions,” Stroman said. “She has 100% of the power and could make things better if she wanted to.”

Zeilinger, a Washington College of Law alumna who was appointed by Mayor Muriel Bowser in 2015, oversees a variety of social services including the city’s welfare program, food benefits, child-care assistance and adult protective services. But local activists have criticized her leadership in supporting the city’s homeless population.

As of 2020, the District’s homeless population is roughly 2.7 times higher than the national average, a rate that is comparable to New York City and Boston.

Stroman said she founded the Department of Human Services Advisory Board in 2018 to give families affected by homelessness “a seat at the table” when it comes to addressing the issue in Washington.

The public board, which meets monthly with the leaders of the Department of Human Services, is meant to act as a platform through which community members can provide feedback on the services and programs the department provides for the homeless community in the District.

According to Stroman, Zeilinger has attended one of the nine meetings so far in 2020.

Department of Human Services Spokeswoman Dora Taylor attended the protest but did not respond to repeated requests for comment on the demonstration or its demands.

While Black residents make up 47% of the city’s population on the whole, they comprise 87% of the adults experiencing homelessness in the District, according to the Washington Legal Clinic for the Homeless.

Cramer said he believes there’s a direct correlation between being low-income, Black and experiencing  homelessness in the District, and it dates back to Washington being the “Chocolate City.” Between 1960 and 1990, D.C. was the preeminent majority-Black city in the U.S with a Black population of approximately 71% at its peak.

“If [public officials] won’t be held accountable, then step down and let us recreate this country in our own image,” Cramer said. “It is very clear that they care nothing about Black people.”

Activists said that showing up for all Black lives, including those being affected by homelessness, is the most effective way to keep moving forward and enacting positive change for Black Americans.

Protest attendee Kenneth Clark said he is done asking for support for the local homeless community from public leaders and that “enough is enough.”

A number of activists at the protest vocalized their support to abolish the MPD and redistribute funds currently allocated to law enforcement to social workers and mental health services to support the homeless community in the District.

April Goggans, an organizer with the D.C. chapter of Black Lives Matter and a member of D.C. Cop Watch, said that she has not seen police in her Ward 8 neighborhood reduce crime. Goggan said that the reallocation of funds could be used instead to support local families.

“Real safety has more to do with meeting our basic survival needs than it does policing our bodies,” Goggans said.

Before MPD officers moved to disperse the crowd at 7 p.m., Stroman had one final message for Zeilinger and other city officials:

“The advocates are tired. Do your job, and if you don’t, we’ll be at your door next.”