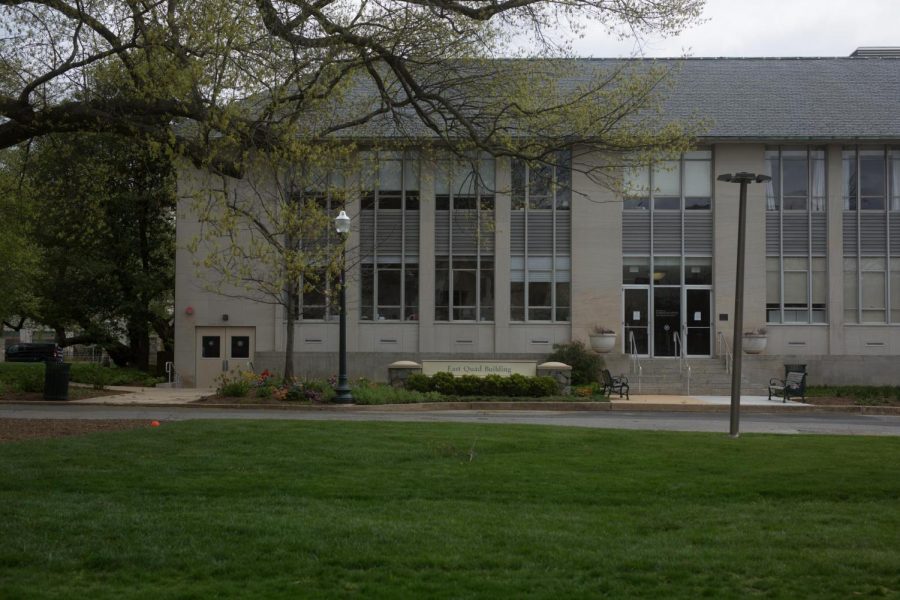 Amid months of Black Lives Matter protests, AU students speaking up about racism on social media and a national demand for racial justice, AU lost its most public antiracist scholar, Ibram X Kendi.

Kendi, founder of AU’s Antiracist Center, announced his move to Boston University in early June followed by an announcement via email that two members of the center’s original team, Malini Ranganathan and Christine Platt, would assume the role of interim co-directors of the Antiracist Research and Policy Center in July and would shape the new direction for the center, particularly in choosing the new director in the coming year.

The announcement followed an earlier statement emailed to both School of International Service and College of Arts and Sciences faculty explaining that despite Kendi’s departure, the center itself would remain at AU. 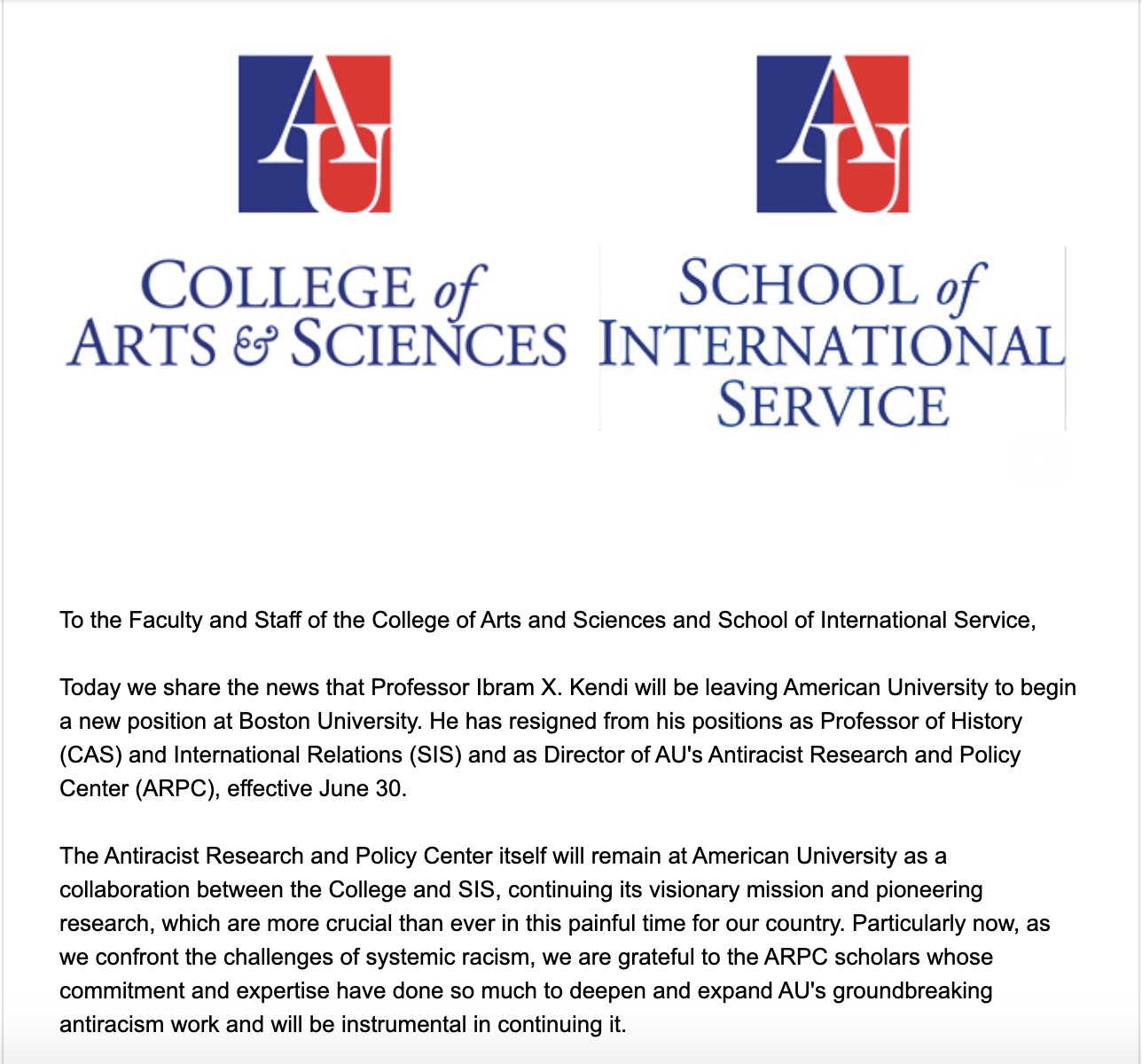 “Particularly now, as we confront the challenges of systemic racism, we are grateful to the ARPC scholars whose commitment and expertise have done so much to deepen and expand AU’s groundbreaking antiracist work,” the email read.

These changes came less than two weeks after police officers in Minneapolis killed George Floyd. In the days following Floyd’s death, organized demonstrations of all sizes engulfed the nation — reaching all 50 states and many countries abroad.

Renewed protests unfolded last week following the shooting of 29 year old Wisconsin man Jacob Blake. Blake was shot seven times in the back by a Kenosha, Wi. police officer and is now paralyzed from the waist down, according to his family. Thousands of demonstrators also  also participated in the Get Your Knee Off Our Necks march Friday, commemorating the 57th anniversary of the March on Washington.

In a Washingtonian article in mid-June, Kendi explained that Boston University is “interested in building a world-class antiracist center” but maintained that he would “rather not comment on AU.”

Since its founding, BU’s center has received multiple significant donations, namely the staggering $10 million unrestricted gift from Twitter CEO Jack Dorsey. BU President Bob Brown described the contribution as “a tribute to Kendi and his vision for antiracism.”

In the twitter thread announcing his move, Kendi said “I am most excited that the real Dr. Kendi will be the new chief of pediatric emergency medicine at Boston Medical Center,” speaking of his wife’s new appointment.

Both Kendi and the former leadership of AU’s center did not respond to repeated requests for comment related to his departure.

BU’s Center for Antiracist Research is the second center of its kind in the nation after AU’s center, but according to Ranganathan, the AU and BU centers are distinct and unaffiliated.

“We consider our interim work with the Center to be a new start, and we are excited to lead the charge of rebuilding and rebranding, especially during this critical moment in history,” the new co-directors wrote in an email on August 24.

Sociology Department Chair Gay Young described Kendi’s departure from AU as a “true institutional loss,” but argued that antiracist work and research are not bound to Kendi or even to the Antiracist Center itself.

“Antiracism in teaching is going on and has been going on in lots of places in addition to the Antiracist Research and Policy Center,” Young said, citing the CAS Center on Health, Risk and Society as well as the Critical Race, Gender and Culture Studies Department within CAS, among other organizations on campus.

Still, Young emphasized that students concerned about the future of the research center and its space on AU’s campus are justified.

“[Kendi’s] departure does not mean those concerns will evaporate,” Young said. “So the work will continue.”

‘I’ve never benefited from the center’

Although the community saw the center as a step in a new direction in 2017, habitual racism at AU has continued, leading many students to criticize its presence.

Recently, Black, Indigenous, and students of color have come forward with their experiences facing racism at AU through the Instagram page @blackatamericanuniversity, which was created June 20 by a Black AU student who has remained anonymous. The page has posted over 200 anonymous submissions and has gained over 3,000 followers since its creation.

The posted testimonials detail racism faced from both students and faculty and critiques of the university’s failure to properly address ongoing racism on campus.

“If you look at the BlackatAU page, you see all of the microaggressions and macroaggressions we go through every single day, and no one’s listening to us,” SIS sophomore Aisha Jallow said. “As a Black student, I’ve never benefited from the center or heard of another student benefiting from it.”

Eric Brock, a junior at AU and AUSG president, said that students have noticed the absence of the Antiracist Center on campus as racism has persisted on campus over the years.

“You can’t have hate crimes on campus and not hear about the hypocritical nature of having an Antiracist Racist Center,” Brock said. “Because if you’re writing about antiracism and you’re just preaching it and you’re not walking the talk, then what’s the point of an antiracism center?”

Jallow said the new leaders of the center need to work with students of color and address racism on campus, especially given that AU is a predominantly white institution.

“The center needs to hear from the point of view of students who are going through their education whilst dealing with racism,” Jallow said. “What’s the point of discussing racism when the people who are most affected aren’t being heard?”

Ranganathan acknowledged the previous center’s approach and spoke of concrete changes to come.

“The previous center was much more, or perhaps, it was solely external-facing and in many ways that brought it a lot of fame, and that was good,” Ranganathan said. “But in other ways, I think the internal communities felt a little bit neglected, and I think we are committed to making this a space that feels like it’s more owned by people internally.”

Platt and Ranganathan maintained that they are “acutely aware” of internal racism on AU’s campus and have plans to directly engage with BIPOC student communities despite this not being the primary focus of the Antiracist Center going forward.

Platt and Ranganathan said their previous work — both in the center and beyond — will shape their new vision for the Antiracist Center.

Platt and Ranganathan both helped to found the Antiracist Center in 2017. Ranganathan served on the committee that hired Kendi, who subsequently hired Platt to further develop the center.

Ranganathan, a tenure-track associate professor in SIS and faculty fellow at the Metropolitan Policy Center, is a scholar of urban geography — a discipline primarily concerned with how “inequalities by race, class and gender are manifest in space,” Ranganathan said.

“Now that our former colleagues have transitioned, I am back to help us rebuild and refocus — that’s why I’m here” Platt said.

Both Platt and Ranganathan also work in the Washington community, specifically in Wards 7 and 8, which are home to the highest percentage of Black people in the District. In the wards, Ranganathan researches environmental injustice, which she says is “especially marked by racial inequality.”

Platt and Ranganathan said they benefit from their working relationship and experiences at the previous version of the center. The interim co-directors foresee the “newly imagined center” as one that is more accessible, collaborative and inclusive.

“We want to make sure that the center is truly a university center that benefits both scholars and students,” Platt said.

Despite a renewed commitment to internal student communities, the interim team notes that the center’s primary charge is to serve as a “scholarly and policy hub” aimed at connecting “AU’s antiracist scholarship with external funding opportunities,” according to an email from August 24.

“It’s vital to note that our mission is not focused on campus life and student experiences per se, unlike the CDI, Office of Campus Life, and Office of Inclusive Excellence, among other centers,” Platt and Ranganathan said in an email to AWOL.  “Our main charge this year is to ensure that we attract a new executive director to lead the Center’s scholarly and advocacy mission.”

‘Something to believe in’

In addition to their involvement with the antiracist center, both Platt and Rangathan remain engaged with BIPOC students at AU in other ways. Platt, a Black woman, recently accepted an invitation to serve as the advisor for AU’s Graduate Black Student Union. Ranganthan, an Indian-American woman, previously served as the faculty coordinator for AU’s Asian American Student Union.

Jallow pointed out the importance of the leadership of women of color and intersectionality in antiracist work.

“We want to both give credit to Dr. Kendi for seeding the energy and the vision initially,” Ranganathan said. She also credited the origins and history of antiracism to intersectional, feminist, and non-binary activists and theorists.

“Women and nonbinary folks have been the ones who are really pushing the frontier. The whole idea of the Combahee River Collective was to show that especially queer women of color and queer Black women have multiple oppressions,” Ranganathan said, speaking of a collective of Black lesbians who pioneered intersectional feminism in the 1970s.

While Platt and Ranganathan’s tenure is limited to just one year, they said they are excited for what they hope to accomplish in that time, especially amid the Black Lives Matter movement and civil rights work that has taken place over the last few months.

According to Platt and Ranganathan, Leena Jayaswal, who is also interim Dean of the School of Communication, will lead the search committee for the next director of the center. The committee, which Ranganathan and a number of other faculty members serve, will publish the job advertisement and the qualifications and parameters of the position in the coming weeks, although there have already been several inquiries about  the position.

Platt and Ranganathan also acknowledged that AU’s history of racism could possibly turn applicants away and said that the future co-directors must be made aware of this history along with “possible ongoing tensions.”

“While it will be important to recognize and confront the campus’ history of racism, we also believe that there are compelling reasons for any candidate to consider the job”  Ranganathan and Platt said in an email.

Brock said that he wishes to see future leaders of the center who are dedicated to implementing antiracist policy on campus and taking action against racism that students have continued to face.

“We need something to believe in,” Brock said. “We’ve already gone through so much.”

The antiracist center is now located on the ground level of the East Quad Building through the main doors and to the right. Following the anticipated loosening of COVID-19 restrictions, the center will be open Monday through Thursday, 9am-5pm. The center will be closed on Fridays.