The letter comes after other student organizations have released similar demands to reduce police presence on campus. 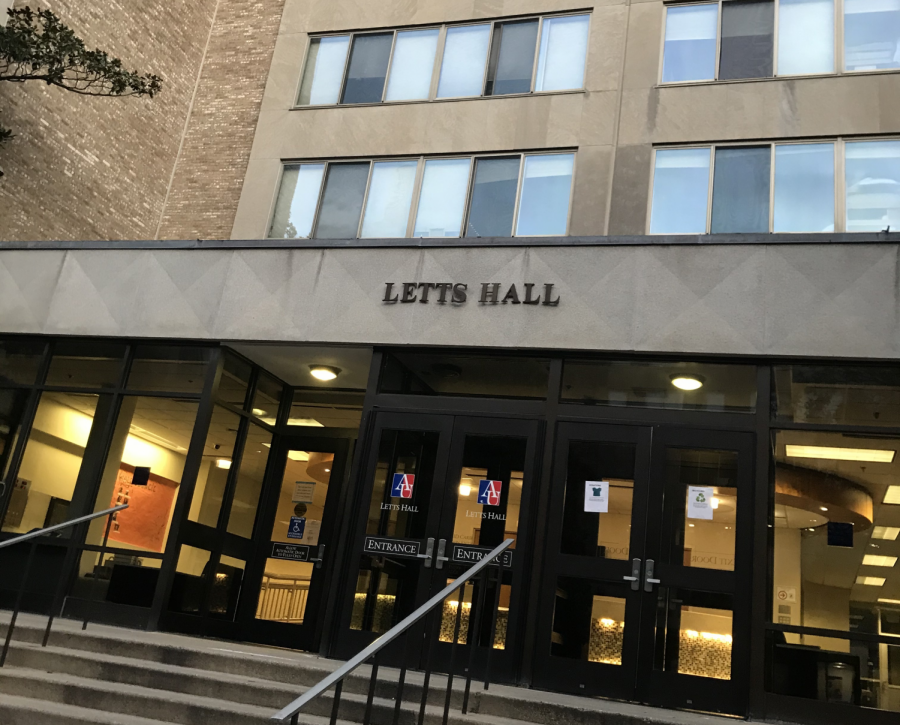 Resident assistants are demanding that Housing and Residence Life end their relationship with the Metropolitan Police Department, provide 24/7 access to community health professionals for residents and reduce AUPD “presence and oversight” in all residence halls.

Fifty eight RAs signed a letter sent to AU Administration, AUPD and professional HRL staff Monday night detailing a series of demands in response to the “racist actions” of police forces around the country.

“We have extreme concerns with the increasing police presence in the Residence Halls. Time and time again police have arrived only to fail, intimidate, and disregard concerns of Black residents and staff, specifically,” the letter reads.

Lisa Freeman, director of residence life, and Christopher Chaves E Silva, director of housing, did not immediately respond to repeated requests for comment. Stacie Burgess, an AU spokesperson, said the university is currently looking into this situation but is not immediately prepared to release a statement.

This story will be updated to include AU’s response.

A current RA, who requested to remain anonymous due to concerns of retaliation from HRL, said in an interview that she would expect to interact with AUPD at least once or twice on any Tuesday night or weekend shift.

“Whenever AUPD comes into a space, and they’re essentially taking control of the situation, a lot of residents have apprehension or are fearful,” she said. “Especially certain residents that have different identities have come to me as an RA to say that they have felt unsafe.”

She said that lack of communication between AUPD and RAs can lead to confusion, and that uncertainty is uncomfortable for RAs and residents: “There are instances when AUPD officers will enter [a residence hall], and we’re not too sure of their intentions.”

Christina Fluharty, an AU alumnus that worked as an RA, said in an interview that resident assistants are trained to work with AUPD, but that this can be “uncomfortable for certain individuals,” especially with an understanding of police brutality in the U.S.

Fluharty said that she had worked in situations in which she believed calling AUPD to deescalate a situation related to mental health would actually exacerbate the event. But her supervisors informed her that in those situations, campus police should be notified and allowed to handle the issue.

Fluharty said she went through three separate RA trainings, all of which she said required resident assistants to work with AUPD. While she said that some trainings with campus police were helpful and informative, others could be uncomfortable, especially when instructed to call campus police in situations that might make residents afraid.

“At the end of the day, we should have professionals deescalating situations, especially mental health issues, rather than police,” said Fluharty. “Why would you need AUPD there when somebody is not actively harming themselves, but they just need a therapist?”

AWOL has previously reported on RAs feeling overworked, under equipped and underpaid by the university. An AU alumnus that worked as an RA in Roper Hall said their demand for community health professionals serves as a key way to better equip resident assistants while also reducing AUPD involvement specifically in mental health situations.

In their letter, RAs focused not only on their lack of support in handling crises, but their beliefs that AUPD often exacerbates dangerous situations.

One RA who worked in the freshmen residence halls said the presence of AUPD made their jobs more difficult when handling sensitive issues, like drug use or mental health checks.

“It’s not a job that you can use force with,” the RA said. “Oftentimes their presence makes it more difficult for us to do our jobs because of just anxiety or just like the lack of training from AUPD’s part.”

This is a concern the letter addresses as well.

Another anonymous RA said they felt the amount of officers responding to a situation was often disproportionate to what was needed, which could be intimidating to students involved in the incident.

In an analysis of AUPD’s crime logs from March 2019 through March 2020, AWOL found 594 incidents reported to AUPD, 359 of which involved campus police response to an event occurring inside a residence hall. In other words, roughly 60% of crimes which campus police responded to during that time period directly involved incidents inside student dorms.

Freshman dorms Letts, Anderson and Centennial had the highest number of reported cases, with 94, 78 and 52 respectively, while Nebraska Hall and Congressional Hall saw the least with 2 at each location. 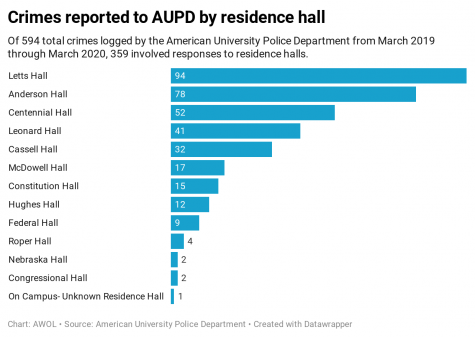 In the same period, only four cases saw MPD responding to a crime reported to AUPD, and of those cases only one involved a student in a residence hall.

An RA who wished to remain anonymous said that the purpose of cutting ties with MPD was “mostly to stand in solidarity with other groups on campus calling for the same reform,” but also came from observing MPD conduct during recent protests.

“Seeing how [MPD] interacts with the protesters today, … even if that’s not the level of violence they’re putting into our residence hall, I don’t think we need that kind of escalation,” she said.

Several RAs echoed the statement in the letter that these concerns have been previously discussed within their community, and that their decision is rooted in serving their residents as effectively as possible.

“This isn’t just RAs gone mad, which I think sometimes is how people see it,” an anonymous RA said. “It is really just us wanting to make sure everyone feels safe in their own community.”

Disclosure: Some AWOL senior editors have roles as RAs at AU. Those staff members were removed from the editing and reporting process and had no role in the publication of this piece.

*This story’s headline was updated for grammar

This story will be updated.

If you are a current or former RA or member of HRL staff, we encourage you to reach out to us to share your experience at [email protected]