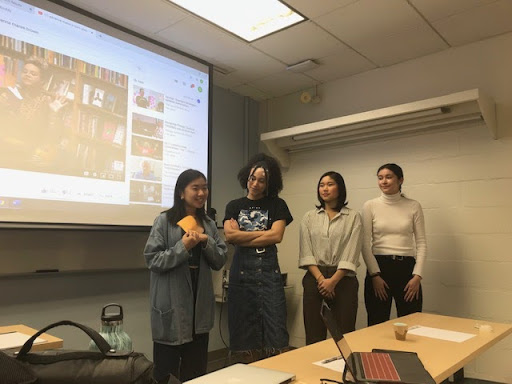 American University’s Asian American Student Union debuted its advocacy committee with the “Self Care as Rebellion” event Feb. 4, where professor Sybil Williams lectured on the importance of self-care in activism.

Attendees learned about “pleasure activism,” or healing from injustices through celebration rather than confrontation. They also journaled about people who had politicized their experiences.

Williams is the program director for African American and African Diaspora Studies at American. She said activists should draw on their own desires in their fight for justice.

American is known for being a politically active school, ranking number five on the most recent Princeton Review. But Williams said she sees too many students become burned out from protesting.

She advised students instead make the pursuit of justice pleasurable. This means self care in three different ways.

Williams said the first is to cultivate a sense of joy. That’s not to be confused with happiness, which she referred to as “the Diet Coke version of joy,” but a deeper sense of peace.

“Joy isn’t dependent on any external circumstances. It is this idea that I am enough all the time — right here, right now,” said Williams.

Intentional honesty is another way to use pleasure activism. Williams said this means speaking about and acting upon one’s root desires.

The final focus of pleasure activism is building communities of care. Williams said these are places where everyone is recognized for having a gift and those gifts are shared equally.

Clarissa Cheung, a member of the Asian American Student Union advocacy committee and head of the event, said she created the committee because of a need for unity on campus. The committee’s goals are to uplift the voices of Asian/Pacific Islander people and form coalitions with other student affinity groups.

“There’s not really a space like this on campus that’s specifically API focused,” said Cheung, referring to Asian/Pacific Islander students. “Just getting people aware of the fact that we exist and that we’re here for them is why we’re doing this.”

Audrey Tombaugh, a freshman at American who attended the event, said that if more students used the tactics of pleasure activism, there would be a stronger sense of community on campus.

“People would probably feel safer and more comfortable interacting with each other,” Tombaugh said.

Alyssa Block, a sophomore at American, said she had always believed self care was necessary, but never thought about it in terms of resistance before.

“My interpretation is to take care of yourself first so you can better resist life and the negative things that may happen,” said Block.

Williams summed up her talk with a call for students to practice “radical love.” According to her, this type of love works towards dismantling oppressive systems and norms.

Williams said this comes down to one question: “What is the source of your power, and how do you use it?”