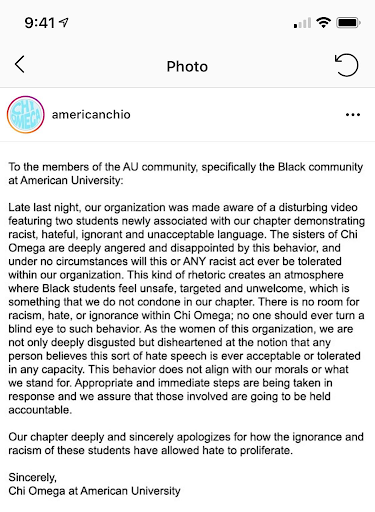 A video of two women at American University where one, a freshman, used a racial slur circulated widely on social media Tuesday night.

The video shows two women who are newly associated with the university’s Chi Omega chapter, one of which recorded the other saying the n-word. Neither student is black.

Chi Omega released a statement regarding the incident early Wednesday morning. They state that the video was racist and that this “behavior does not align with [their] morals” as an organization. They also state that “appropriate and immediate steps are being taken in response.” 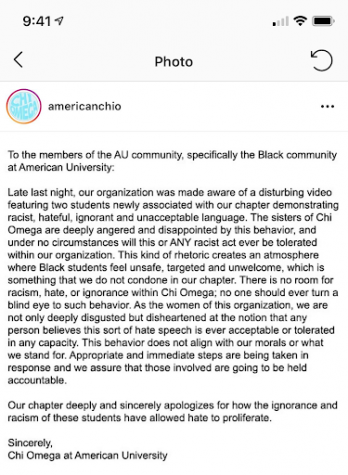 The sorority later posted a second statement, which has since been taken down. It stated that the women involved were both removed. Chi Omega has not responded to requests for clarification on whether the students are still involved in the organization.

The University sent an email Wednesday night addressing the situation. According to the email, the University “began taking action as soon as [they] learned of the event” and is working on “restorative action.” The email also stated that there is a “need to recognize and understand the historical and ongoing impact of racist language.”

The Office of Fraternity and Sorority Life has yet to respond to requests for comment on the incident.

A similar incident occurred last Spring semester when a white male student was recorded saying the n-word multiple times in a freshman dorm.

For the first time, First Year Advising issued a statement following a racist incident. Their statement, released midday on Wednesday, stated that the video was “a racist act” and “has added to the harm already experienced by Black students on this campus.”

First Year Advising held two open dialogues events on Wednesday. One event was for creating a safe space for black-identifying students on campus. The second event was aimed at nonblack students and faculty looking for ways to be better allies to AU’s black community.

Several student organizations have released statements the use of racist rhetoric by the former Chi Omega members, including AUSG, AU Democrats and the South Asian Student Association. Their statements have been included below: 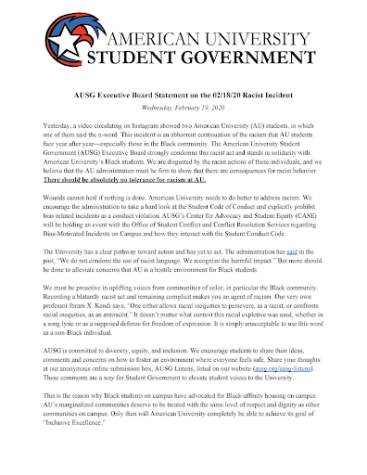 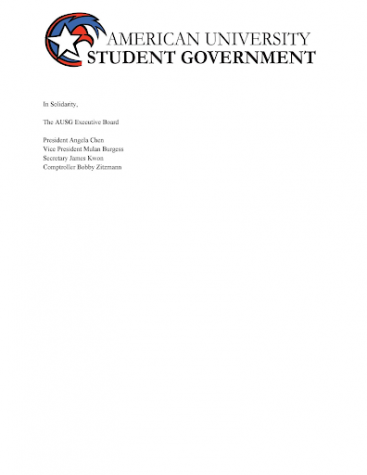 The student issued an apology on her Instagram profile, which has since been deleted.

This story is constantly updating. If you are in a greek organization and have experienced racism or similar incidents, reach out to [email protected]