Iowa residents caucus for the first time in Washington 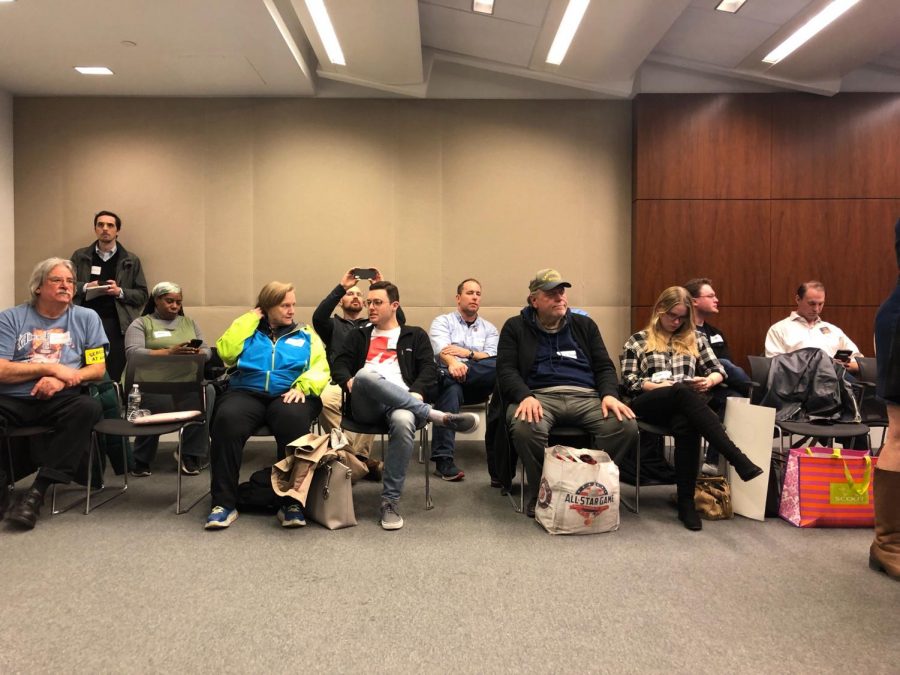 Washington political junkies watched as Iowans caucused for the first time outside of their home state on February 3.

For the first time in Iowa caucus history, satellite caucuses were held around the country and abroad so Iowa residents could participate in their first-in-the-nation contest. The satellite caucuses come as a push for the Iowa Democratic Party to make primary voting more accessible for out-of-state voters.

Registered Iowans and observers gathered at the International Brotherhood of Electrical Workers headquarters on 7th Street Northwest to engage in the historical caucus. 100 Iowans participated in the event.

Journalists and observers swarmed the satellite caucus to get a glance at the process. Chris Parker, a 37-year old John Deere employee, compared this caucus to those he had done in the past.

“This is crazy, the last time I caucused it was like in a high school gym,” Parker said. “It was nice and quiet. This is madness.”

Rocco Zappone, a 64-year-old writer born and raised in Washington, said he was thrilled to see the caucus happening in his own city and to have the opportunity to observe the process.

“I’ve always been fascinated with the caucuses, and every four years I listen to the explanations of how they operate and I still feel like I don’t have a clue as to what they’re about,” Zappone said. “So I just wanted to be here to see it in person.”

The scene at the IBEW headquarters looked foreign to the caucusgoers. Participants had to register by Jan. 17 and were from very different areas of Washington, a stark contrast to the neighborhood-oriented precincts in Iowa.

Furthermore, participants were crowded by local journalists looking to understand the new satellite caucus. Drew Veysey, a 32-year-old researcher doning Sen. Bernie Sanders buttons, did not know a single Iowan in the room.

“I think half the people in this room right now are not actually participating, so it changes the dynamic a little bit,” Veysey said. “These people are literally not my neighbors.”

Some Iowans living in Washington were not aware that the satellite caucus was happening until it was too late to register. This includes Jessica Decou, who did not know it was being held until 5 p.m. on caucus day.

“Even my mom, who lives in Iowa, didn’t hear about the satellite caucuses,” Decou said.

Many people participating in the event were college educated, living in Washington to work for the government and more progressive leaning than Hawkeye state. Participants noted the difference and predicted the outcome might look different than the outcome back home.

“I think we will have more liberal candidates represented here than Iowa. Less Buttigiegs and Klobuchars and more Warrens and Sanders,” said Josie Mills, a junior at Georgetown University and a first-time caucus participant.

Results from the rest of the caucuses were delayed due to reporting issues related to a new application being used for the process. Full results were not confirmed until Friday, stirring controversy among the candidates and the Iowa Democratic Party.

Americans share a variety of opinions regarding the efficiency and legitimacy of the Iowa caucus system. However, Iowans regard their process as one of the most unique political processes in the country.

“I love caucusing. It’s amazing because the party actually has to get together and hash out the differences between the candidates, and I feel like if every state caucused, we would have a much more unified party,”  Decou said.