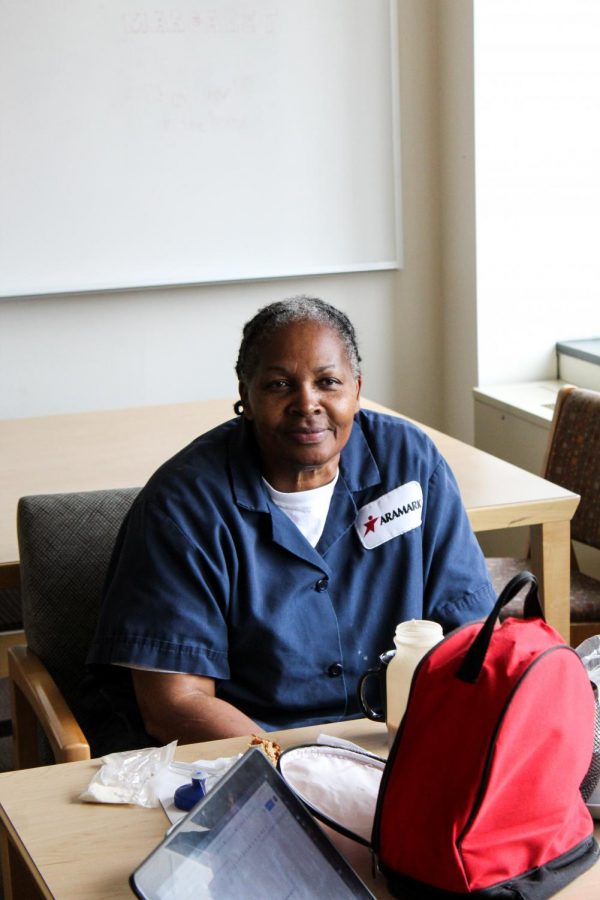 Mildred Smart has no complaints.

“If I tell you I have a problem, I would be lying,” Smart says with a smile.

Smart, known as “Patricia” in the workplace, has been working at American University for 26 years. From Sunday to Thursday, she rides the bus for an hour to arrive at work by 7 a.m., where she begins her favorite part of the day: greeting the students.

“My joy of of coming to work here is meeting the kids in the morning, and they smile at me,” says Smart. “I’ve been here 26 years and I never find one mean kid that I don’t get along with.”

Her workday starts with vacuuming and wiping down the lounge, moving to the hallway to clean and finally scrubbing down the bathroom. One day a week, she does a “major clean” of one floor. She’s done around 3:30 in the afternoon.

With her body still recovering from a recent breast cancer surgery, Smart could have easily highlighted the long hours and manual labor of her job.

Instead, she just says: “I’ve been blessed. I have no problems.”

Smart is famous among the students who live in the residence halls that she works in. They know her as the housekeeper who always greets them in the mornings and offers them medicine or tea if they’re getting sick.

How did you start working for AU?

Many years ago when I had my son, I was out of a job. I was coming from the doctor with my son one day and I was wondering how I would manage with no job, when I met this nice lady at the bus stop who used to work here. She sent me here to go to the manager and the same day I went and told her who sent me. She hired me on the spot. So I was very lucky.
“I’ve been here 26 years and I never find one mean kid that I don’t get along with.”
Where did you grow up?

I’m from Jamaica. I came to the States when my boss brought me here, because her husband was transferred to the International Bank and they brought me along. There were two of us, but they couldn’t keep both so they told me they had to let me go. And then I was lucky to start babysitting for a nice family in Virginia.

Do you ever miss Jamaica?

You always miss Jamaica. It’s my homeland and stuff, but I prefer living here. Life is better. American life is more modernized, there is opportunity.

Can you tell me about growing up there?

My life in Jamaica was fun. I grew up in the country, I had a great life…we didn’t have a lot, but life was nice. You get to do things, not modern things. Back home, you get to go get the water in the river, wash your clothing and do all that stuff. Growing up in Jamaica was one of the best life I ever had.

Can you tell me about your family?

My mom had five kids, and I was the last. On my father’s side, he had nine. We lost three of them. I have a son, Claudino, and my daughter Jeni, and two grandbabies. Claudino is only 25, so he’s too young to be getting kids. He’s trying to find himself right now, he just moved out three weeks ago.

Why did he decide to move out?

He says he doesn’t want to be a burden to me because he isn’t working. But I think his main goal for the future is to do music. He’s so brilliant, he’s one of the smartest kids you ever come across. When they are so smart, they’re never able to hold a job. Ever since he was in school, he would never sit down and read a book. He would just look to the book and he could tell you the whole story. His kindergarten teacher said it’s because of him she stayed in teaching.

What’s your favorite part of working for AU?

As long as I get along with the kids on my floor, I’m good. They’re always happy to say good morning, and most of them know my name…it’s one of the nicest things just to look forward to come to work. I usually bake pineapple upside down cake for my kids, but I haven’t got the chance to do it for this floor.

The only time like that is in the summertime, because it’s more stressful. We have to go from building to building. We get a lot of groups and we have to change beds, clean the room, and get them ready for the guests that is coming. The beds, they are much too heavy to lift. That’s the only time we don’t like it.

What is your approach to interacting with the students? Where does that positivity come from?

I love all my kids. I will give you a story: many years ago when I was in Letts, there was a kid who moved to Letts from Anderson. And I said to him, I’ve never seen you on this floor before, are you new? He said he asked to be transferred to Letts, and that his housekeeper in Anderson never talked to him. So I said to him, you know what, you have a friend on this floor. And he and I got along very well. You should see the smile on his face when I said that.

So you really have no complaints?

Nothing bad to say. Well, I still wish I could retire because I was very sick and I was off for eight months because I had major, major surgery. I had breast cancer so they had to take my boobs off. They gave me reconstruction and all that, but this arm [will] never recover. So I have to go back in so they can fix it. This is my second time around and I beat it. God is good.
So I said to him, you know what, you have a friend on this floor. And he and I got along very well. You should see the smile on his face when I said that.
Anything else you’d like to say to whoever might read this?

AU is a very nice place to work. Nobody bothers me, I’ve been very blessed. I get along with my boss. If they do come and tell me: Patricia you need to fix this, I just do it! If you have a boss that never come and point out something, you’d wonder what kind of boss you have anyway. That’s why you have a boss. But I have no problem. I’m very blessed. 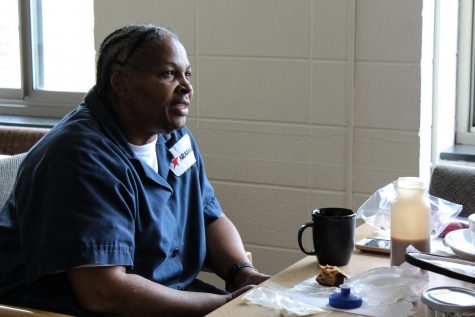