How fashion industry members in D.C. are working to create sustainable clothing. 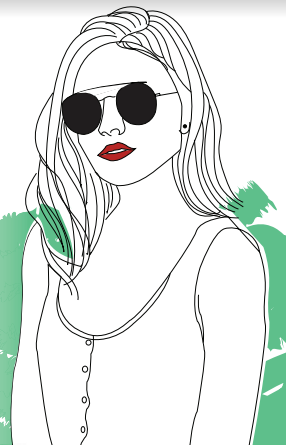 Joelle Firzli, a trilingual fashion researcher and writer, is the CEO and curator of the sustainable fashion retailing brand Tribute in D.C.

Firzli is a founding member of the D.C. Sustainable Fashion Collective, which was built and organized by seven members in 2018. She and the organization works to educate  entrepreneurs, lawmakers, designers and customers on understanding sustainability in fashion. They would like to help people to establish eco-friendly fashion businesses in D.C. and other cities.

Firzli studied political science and international affairs at Lebanese American University and diplomatic studies at the University of Westminster from 2001 to 2007. She gained her master’s degree of fashion studies at Parsons School of Design in 2016.

“People should care about what they wear and invest in materials that are good for the environment,” said Firzli.

Many laborers in the fashion industry work in unsafe conditions and earn just enough to support their families. Most of these factories are fast fashion brands including H&M and GAP, according to Green America.

Firzli was an associate fashion editor for publications in the United Arab Emirates, Kuwait and the Saudi Arabia from 2007 to 2011. Firzli and her workmates at the magazine went to Vietnam and visited a clothing factory and a second-hand market in 2009 to create a fashion industry report.

Firzli said she thought the clothing factory she visited was messy, even though it was cleaned before they arrived. Firzli also believes some rooms were locked because the manager knew Firzli and her group were visiting.

“Some rooms were closed, and the manager of the factory didn’t allow us to visit them. I knew they were hiding something,” said Firzli.

“The laborers in the clothing factory didn’t wear protective gloves and operate[d] dangerous machines to nail buttons on the belts, which hurt their fingers easily,” Firzli said.

The collapse of the Rana Plaza in Dhaka, Bangladesh, which housed five garment factories, killed 1,132 people and injured 2,500 others in 2013, according to the International Labour Organization. This case revealed how horrible the conditions faced by laborers in the fashion industry can be.

When Firzli visited a second-hand market in Vietnam, the manager required them to take off their shoes and socks, and each person could only carry one bag. If they didn’t follow the requirements, they couldn’t visit the market.

“There were numerous fast fashion brands like Zara and H&M, which were cheap in the United States. But the Vietnamese cherished them at that time,” Firzli said. “I was confused as to why they did this, and I still don’t know how the tons of the goods are transported to Vietnam.”

Because of the great demand for cotton in the fashion market, fast-fashion companies need thousands of tons of cotton to make clothes. Cotton farmers in countries such as India, China and some on the African continent, have to use large amounts of pesticides on their crops. Due to the pesticides remaining in the farmlands and rivers, the local farmers and citizens and children, have  gotten cancer years according to World News reports.

In addition to toxic some cotton potentially containing carcinogens, dyes, especially indigo, are poisonous to the laborers in the fashion industry. Indigo commonly binds externally to the cloth’s threads, coaxed by a chemical agent called a mordant, according to Popular Science.  Denim, which is made of indigo dye, is a large part of the fashion industry. Fashion couldn’t exist without denim, which is made of toxic indigo dye. Some denim factories didn’t provide protective work masks and clothes to their laborers.

The actions of the fashion industry inspired Firzli to stay in Vietnam for four years to research how to build a sustainable fashion market for the future of fashion development. She studied cannabis and recyclable liners as potential original textile materials.

After these four years, Firzli kept studying fashion at Parsons School of Design from 2014 to 2016. Now she has her sustainable fashion brand, Tribute.

Tribute works with over 20 designers and brands to create recyclable and biodegradable clothing.

“These materials are cannabis and they are really comfortable. The touch feels like real cotton and silks,” said Firzli. “Some backpacks’ inside liners are made by plastic bottles collected from the ocean.”

Gabrielle Clary is also one of the founding members of D.C. Sustainable Fashion Collective with Firzli. They held a fashion and textile event in Corcoran School of the Art and Design at George Washington University in October.

Clary is studying sustainability management at the Kogod School of Business at AU. She is an eco-friendly researcher and entrepreneur in D.C. and helps Firzli to organize Tribute.

Clary had an internship in the retail associate department at Forever 21 for about nine months as a sophomore. She said she didn’t enjoy the internship because the store was managing excess amounts of merchandise, and its atmosphere was not conducive for the customers to enjoy their shopping experience.

In response to the negative internship experience, Clary became passionate about studying sustainability business. Her goal is to work with fashion brands who don’t have a strong sustainable business.

“The fashion market has to be sustainable in the future because the resources couldn’t supply to human beings all the time,” said Clary.

When asked what brands Firzli believes are sustainable, she recommended Eileen Fisher and Reformation. Both companies say they value sustainability and fair working conditions on their websites.

Firzli has to ensure the factories are using sustainable textiles and offered good environment with good salaries to their labors.

Ziyi Yuan is a junior studying journalism and graphic design.

CORRECTION: This article has been amended to remove a misinterpreted statistic from EcoCult.