At Their Most Vulnerable: The Rise of Crisis Pregnancy Centers

Public hospital closures in historically Black neighborhoods in Washington, D.C. have left the most vulnerable communities at the mercy of fake abortion clinics 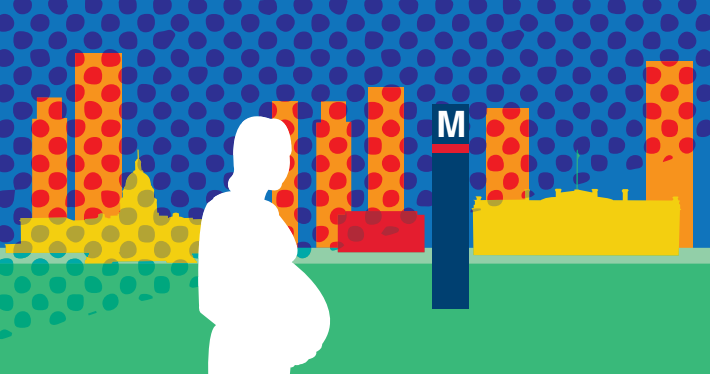 It’s a quiet Tuesday afternoon in Capitol Hill and a woman stands in front of a brick building painted white with a forest green trim. Her stomach hangs low over her waist band and a toddler cries at her feet.

There’s a phone number scrawled onto a Post-it note that’s stuck on the front door. She punches the number into a flip phone and waits. The doors are always locked at Capitol Hill Crisis Pregnancy Center — but there are no protesters wielding signs or shouting obscenities at the women who walk into this clinic.

CHCPC is just one of many faith-based organizations in D.C. that advertises free and confidential services to women experiencing an unintended pregnancy. However, despite its name, CHCPC isn’t a medical provider at all.

Reproaction has been at the forefront of strikes, public demonstrations and protests for reproductive justice across the country. Today, Reproaction is one of the most engaged organizations in the fight for holding fake pregnancy clinics responsible.

“They advertise free pregnancy testing, counseling for abortion, free ultrasounds, and a number of other services that on the outside make them look like they’re a real abortion provider. In reality, the second that they get folks inside the door the deception begins,” Blunnie said.

Inside CHPC, there is a rack of tiny shoes lined perfectly in a row next to a wall of informative pamphlets. “The First Nine Months” one leaflet reads. On its cover a woman holds her stomach and smiles. Another, printed in bold black and red ink, warns of the health and safety issues of abortions.

The National Abortion and Reproductive Rights Action League, Pro-Choice America, lists some of these methods of deceit, saying CPCs use these tactics to deter women from seeking an abortion. This includes methods like providing medically inaccurate mental health and abortion information, shaming, manipulation and forcing women to view anti-abortion films, slideshowsand photos.

In 2018, the U.S. Supreme Court ruled in a 5-4 decision that unlicensed centers are not required to post their medical status at their facilities on the grounds of the First Amendment. There were no postings outside, inside, or on the website of the CHCPC.

“A lot of crisis pregnancy centers, including CHCPC, look as though they are a community business. In reality, they are often linked to larger faith clinic networks,” Blunnie said.

Janet Durig, executive director of CHCPC, said that all of the information that clients receive is factual, and that the clinic obtains its handouts from organizations like Heartbeat International.

Heartbeat International is one of the three major faith-based, pro-life networks operating in the U.S.. The agency provides free anti-choice materials and trainings for its affiliates.

“It’s very strategic to look as though the clinics are just groups of nice-looking older women who are trying to help other women,” Blunnie said. “In reality, though, this is something the pro-life movement has been using as a tool to trick vulnerable people.”

Lisa Loving, now in her 50s, looked back on her experience with a crisis pregnancy center and said she wishes she knew then what she knows now.

“I had unprotected sex with my boyfriend when I was 16 years old and had a feeling I was pregnant,” Loving said.

Loving’s older sister had gotten pregnant young as well, and decided to keep the baby. But that wasn’t the future Loving had envisioned for herself. She knew that what she wanted was an abortion, but what she needed was help.

“When I went in, they never asked to speak with my parents or demanded to notify them, which is why I called them — if I was wrong, I didn’t want to upset my parents over nothing,” Loving said.

For some women, the decision to have an abortion isn’t a difficult one.

“I knew the facility would try to talk me out of having an abortion, but luckily I was completely decided before I went there,” Loving said.

CHCPC isn’t the only clinic in the District using deceit to draw in vulnerable women like Loving.

While CHCPC claims that the clinic is run solely off generous donations, other CPCs receive federal funding through tax subsidies and government programs like Title X, a federal family planning statute. The Northwest Center, a CPC located in Lanier Heights, receives thousands of dollars each year from local and federal grants to keep its doors open.

Susan Gallucci, the Northwest Center’s maternity home executive director, said that the center is pro-life but not faith-based. However, the center predominantly distributes information from Care Net, an evangelical Christian organization.

With dwindling numbers of abortion providers across the U.S., the District is no different, and the most vulnerable populations are at the greatest risk.

Blunnie said that the district has a ratio of 1-to-1 between real and fake abortion clinics. Just outside of the District’s boundaries though, in places like Northern Virginia, CPCs outnumber real clinics 4-to-1.

The former vice president of health policy at the American College of Obstetricians and Gynecologists, Dr. Barbara Levy, called D.C. “the most dangerous place to give birth in the United States if you are African American.”

Dr. Roger A. Mitchell, the District’s Chief Medical Examiner, testified at a public hearing that in D.C., 75% of mothers that died of complications related to child birth between 2014 and 2016 were Black women.

The maternity wards at Providence Hospital and United Medical Center, in Northeast and Southeast D.C. respectively, once predominantly served pregnant Black and low-income women. Both hospitals abruptly and quietly closed their doors in 2017 after D.C. council members slashed the only public hospital in the District’s budget by millions earlier this year. The decision leaves women of color in D.C. with few places to turn.

From this moment of despair rose CPCs.

According to Gallucci, the Northwest Pregnancy Center predominantly serves low-income women of color. Roughly half of their clients are Black or African American and the other half are Latinx. Durig said that these numbers are similar at CHCPC.

These demographics aren’t a coincidence.

Care Net launched its Underserved Outreach Initiative in 2003 with the goal of “reaching underserved and over-aborted people in urban communities,” according to the organization’s website. The agency is specifically targeting “abortion-vulnerable, inner-city African American and Latino women.”

When United Medical Center closed its doors for good, CHCPC saw it as an opportunity. The center is planning on opening a satellite clinic in Southeast D.C. as soon as a space becomes available.

Approximately 97% of residents in Anacostia, D.C., a community located east of the Anacostia River, are Black or African American, according to census data. Currently poverty rates are three times higher here than anywhere else in the district.

The presence of fake clinics in this area continue to rise.

“The real danger of a Crisis Pregnancy Center is that teenagers caught in a difficult situation can be mislead into a situation beyond their control — such as giving birth — without understanding the long-term ramifications,” Loving said. “They are life-altering.”

If you or someone you know is in need of medically accurate, confidential, and affordable assistance regarding reproductive health, contact the resources below:

McKenzie Beard is a sophomore studying journalism and women and gender studies.