Deaths in the District, Part I 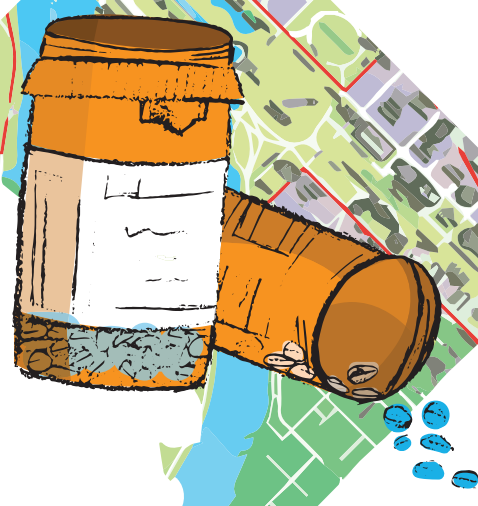 This is the first part of an AWOL investigation which examines the effects of environment on deaths caused by opioid overdose, with a focus on the D.C. area. The second part of the series will focus on the location of overdose calls throughout Washington.

A man named KJ died of a heroin overdose in the public restroom of a metro station in Budapest on Jan. 9, 1999.

In 2015, nearly half a million people died from opioid overdose worldwide. But KJ’s death was  different than others.

Researchers from the Budapest Addiction Research Institute in Hungary examined his case in 2005 and came away questioning the real cause of his death.

According to accounts from KJ’s wife and friends, he decided to stop using heroin the night before he died. The next morning, he broke his promise and went to his dealer. Researchers noted that the morning he died, “he injected the same quantity (0.5 gram) that he had taken the previous day in the accustomed place, at home with his wife.”

The fact that he used the same amount of heroin as the previous day was critical to the researchers’ conclusion that the environment in which a drug is repeatedly used could play a significant role in the body’s ability to tolerate a substance. Similar to physiologist Ivan Pavlov’s dogs drooling at the ring of a bell, environmental stimuli such as room color, lighting and familiarity could “condition” a person’s physiological response to a substance.

In other words, they found that when a drug is taken in a familiar environment over multiple occasions, the body begins to “expect” the drug in that environment and develop responses to counteract the drug’s effects. This is called behavioral tolerance.

According to the Hungarian researchers, KJ’s case offered evidence that when a drug is taken in a new or strange environment, a person’s body could have a more serious reaction to the same amount of a substance than if it was taken in a familiar setting.

This could mean the difference between life and death.

The most relevant research on this topic was conducted nearly three decades ago by Shepard Siegel, a Canadian sociologist. Since 1984, he has repeatedly linked changes in environment to opioid overdoses in rats and has also studied environmental stimuli as a factor in alcohol tolerance in humans.

In his past studies, Siegel also cited work that concluded the basis for alcohol tolerance originates from environmental cues in the places people often drink. He said the relationship between location and use directly relates to opioids as well.

According to Siegel, the three animal studies he already conducted on this topic unequivocally “prove” the relationship between opioid overdoses and environment. He said he also believes that people should pay more attention to this subject considering its consequences, and that there’s a reason this angle is largely overlooked by opioid researchers.

“The people involved in opiate research tend not to be psychologists,” Siegel said. “They come from a different place, different backgrounds and different orientation … the idea that environmental cues are important is very foreign to them.”

In his opinion, there is a lot more interest in the effects of “adulterating” heroin with stronger substances, like synthetic opioids, rather than the environment where a drug is taken. Many people suggest overdoses may be more complex than simply recording the amount of opioids taken  and that a lot of the factors relating to overdose remain under-examined.

Besides the small amount of research that has been done on this topic, there are questions about the reliability of the existing research and if any real conclusions can be drawn from it.

David Kearns, a professor of psychology at American University, said his issue with Siegel’s research is that it was primarily conducted on rats. This method is not always reliable when relating experiment results to people.

“It’s theoretically possible,” Kearns said. Despite his misgivings on the research, Kearns said that he respected Siegel’s work and that the research has never been discredited.

Both Siegel and Kearns agreed that alcohol tolerance studies could be used to draw a logical and scientifically sound connection between the environment in which someone uses a drug and their body’s response. Siegel said his main difficulty with proving this directly is the ethical limitation in place that stops researchers from experimenting on people, especially involving addiction science and overdose.

That doesn’t mean, however, that this kind of research is impossible.

A team of researchers in Barcelona conducted a human-based study in 1994 which suggested that environment has a direct relationship to drug tolerance. In the study, researchers interviewed people who received emergency medical services for overdoses. They found that if a person had overdosed on the same amount of a drug as they usually took–like KJ did–they were significantly more likely to have taken it in a novel location.

“The association between heroin overdose and unusual drug administration setting conﬁrms the inﬂuence of non-pharmacological factors in heroin overdoses,” the researchers wrote. “Further studies should be considered to address the role played by self-administration of heroin in an unusual setting in conditioned tolerance.”

Siegel and the researchers in Budapest agreed that KJ’s experience could be part of a bigger story. He first used heroin in 1995 and became an experienced user in the four years leading up to his death. Over the course of six months, he increased his dosage from half a gram weekly to a full gram every day. Four years later, he would overdose on just half a gram. According to the Budapest Addiction Research Institute, the quality of the drug he took that morning in 1999 was no different than usual.

Chikarlo Leak argues that many deaths from opioid overdose are caused by a lack of education programs and harm reduction initiatives. Leak works in the Washington office of the chief medical examiner to compile mortality reports on opioid-related overdose deaths. He also works as a consultant for Washington Mayor Muriel Bowser’s Live Long DC Initiative, which addresses opioid use in the city.

Leak said that the November 2019 report on overdose-related deaths, which has not been released as of publication, shows Wards 5, 7 and 8 as having the highest rate of overdose deaths.

Leak says this is related to the racial demographics of those wards, all of which are predominantly Black. According to the D.C. Office of the Chief Medical Examiner, the typical opioid user in the city is a 50 to 59 year-old black man, as opposed to the national average, a white man between the ages of 18-29.

Leak also said that the newest report shows overdoses aren’t declining despite the $24 million plan to combat deaths in the District. The initiatives in place revolve around expanding education and awareness while also providing access to life-saving opioid reversal drugs like Narcan.

“We want to make sure residents and users are aware that there are services in the city,” Leak said.

None of these city initiatives mention environmental cues as a factor in overdose.

There is still research to be done. But if there is even a possibility that these conclusions are valid, substance users should be made aware of the fatal risks that may come with using in a different environment.

“If heroin [users] were instructed about the importance of environmental cues, … if they knew that taking it in a novel environment was a risk factor for overdose, they would be less likely to suffer an overdose,” Siegel said. “That message does not go out.”