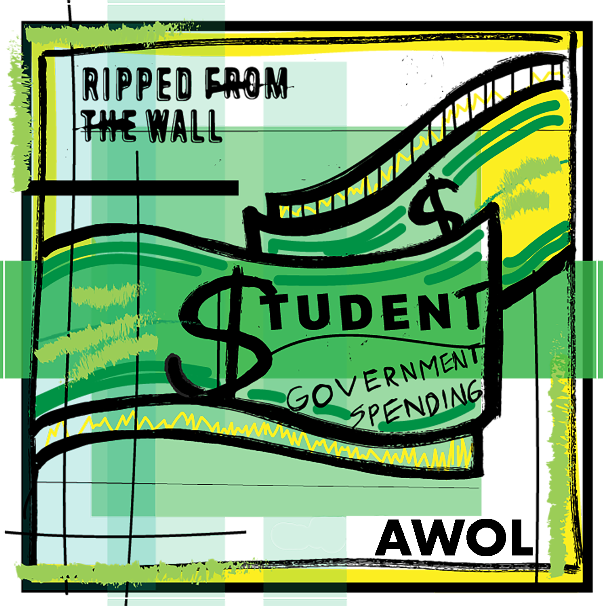 American University Student Government has an annual budget of over half a million dollars. Every student pays an activity fee of $88.50 to fund clubs, student media and AUSG.

Half of these funds go to AUSG’s staff and activities, which include adjacent organizations like the Kennedy Political Union and the Women’s Initiative. This $570,000 is designed to finance speaker fees and community events.

The organizations also use student money for a number of purchases, such as internal merchandise and food for their staff. According to information made available by AUSG, this semester’s expenses included $270 on lapel pins, about $700 on Chipotle and nearly $1,200 on embroidered quarter-zip sweaters for KPU staff members.Some members within AUSG disagree about the way student money is spent. AUSG Comptroller Bobby Zitzmann, who oversees the organization’s expenditures and makes regular budget reports, said he believed some of KPU’s spending this semester was questionable.

“If I were the KPU director or the KPU finance coordinator, KPU would not be spending money on that internal merchandise that’s just for KPU members,”  Zitzmann said. “I think that is unethical because it’s using student money for just benefiting someone who has the privilege of being a KPU staff member.”

Zitzmann, said that an AUSG member purchasing a $40 sweatshirt for the organization is comparable to a student government member taking out $40 in cash from an ATM and giving it to themselves.

“I don’t think there’s an ethical distinction, and if we were just handing out literal bags of money to student government members, that would clearly be an ethical problem,” Zitzmann said.

Jordan Bell, who oversaw the $1,200 expense as KPU’s financial coordinator, said he believed the spending was justified.

“I think it’s beneficial to the organization and to AU’s student government by promoting KPU, the school, AUSG as a brand,” said Bell. “I think having a … uniform apparel for staff members to have is a good thing.”

Bell said he did not think the spending was unethical because it was approved by several people.

“It was something that had to be approved by multiple steps with the understanding that we would be held accountable,” said Bell. “[By] the Vice President, by student activities, by the student body.”

According to reporting from The Eagle earlier this semester, AUSG’s most recent election turnout hit its lowest point in years. In AWOL’s investigative podcast, Ripped From The Wall, most students interviewed did not know what AUSG was spending its money on despite their new focus on budget transparency. 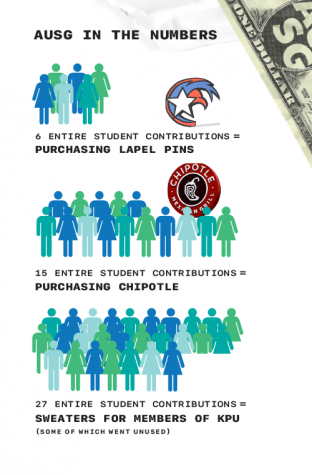 AUSG President Angela Chen said she believed this disinterest has to do with students’ perceived ability to affect change within student government.

“I think a lot of students don’t believe that their vote like matters, whoever they elect is actually going to hold true to their campaign promises,” said Chen. “That has to do more with student voter turnout than necessarily students being apathetic, or whatever people want to say it is.”

Chen also said she believes there is value to spending money to create a brand for organizations like KPU as part of their effort to demonstrate professionalism to both visiting speakers and students alike. Within the organization, members are balancing their personal beliefs with ensuring they are doing what is best for students, she said.

This semester, AUSG introduced a new position to its ranks: the director of executive board accountability. Schanelle Saldanha, a sophomore in AU’s School of Communication, took on this role.

Saldanha meets with senior members of student government at least once every two weeks to check in about student concerns and ensure they are responsive. She said an important part of her job is being an outlet for students.

“I am a person on campus that they can come to if they’re frustrated, if they’re excited about something that’s going on, if they need more information about something, if they want better contact with any of the board members, for whatever reason, I am a resource on campus,” said Saldanha.

She said that students’ concerns on how AUSG operates are justified along with the issues students have brought up in the past in terms of transparency and “making sure that people are doing it for the right reasons.”

“The tricky part about student government … is that a lot of the things that happen cannot necessarily be properly communicated with the student body,” said Saldanha.

Saldanha said she hopes her position will provide students with the opportunity to raise their voice when they have questions about AUSG spending and operations. She also hopes students will reach out to her when they see something they disagree with or don’t understand.

“I’m really a resource in order to make sure that the people that you elected are serving you in the best way that they can,” said Saldanha. “That means, of course, following through on what they ran on. If they’re not doing that, my job is to make sure that they’re being held accountable.”

Listen to the podcast about the story with AWOL’s Ripped From The Wall, available wherever you listen to podcasts.