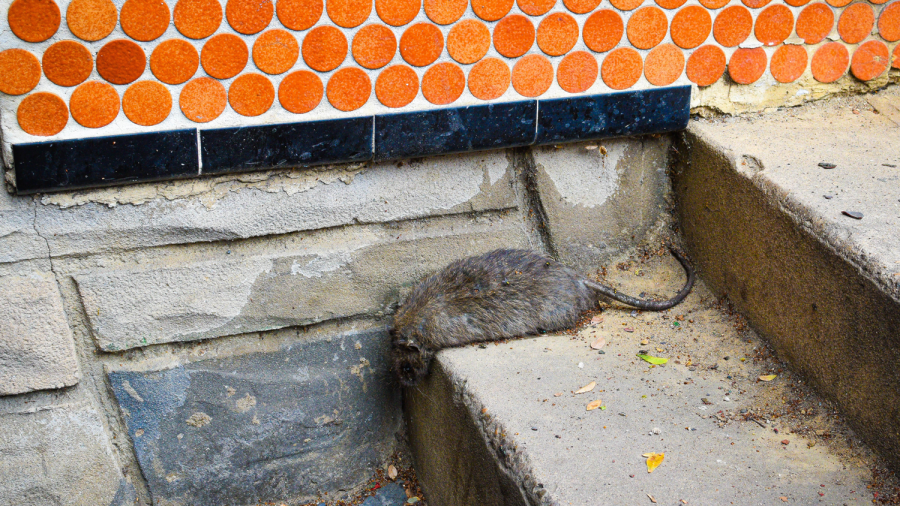 Rodent complaints in the District have officially surpassed last year’s total for a whopping 6,036 rat reports as of Tuesday evening.

Conflicting reports from local media outlet WTOP and the official numbers from the D.C. 311 open database put last year’s total rodent-related service requests somewhere between 5,715 and 6,009. By either metric, it’s clear that D.C. has a ratastrophe on its proverbial paws.

Over the past six years, complaints about rodents have seen a sharp increase, from 920 in 2014 to 3,531 in 2016, and between five to six thousand for the past two years. D.C. Health has tried everything, from putting dry ice in burrows to wire mesh at the bottom of yard fences and even an army of feral cats unleashed on the city’s streets.

Wonk Cat did not respond to repeated requests for comment on whether it would join their ranks in the coming months. 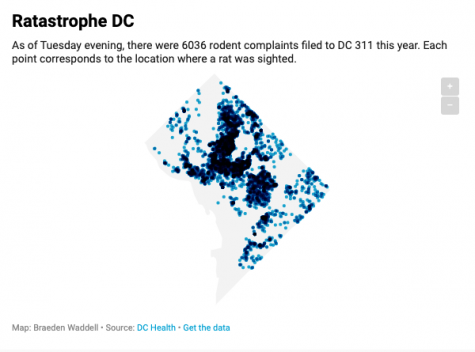 Wonk Rat ain’t all that

Despite the relative fame of “Wonk Rat,” who was caught in an AU-viral video last year, AU’s Ward 3 consistently had the fewest reported rat-cidents for the last three years.

But that hasn’t silenced AU students.

Videos of rats in trashcans around campus, graphics arguing that Wonk Rat could have replaced Aramark as AU’s dining provider and conspiracy theories about the Wonk Rat’s role in the closure of Megabytes Cafe have populated the student meme page for months.

One student noted that Wonk Cat and Wonk Rat may even be the same animal, although AWOL was unable to confirm this. It should be noted that the two have never been seen in the same place at the same time. 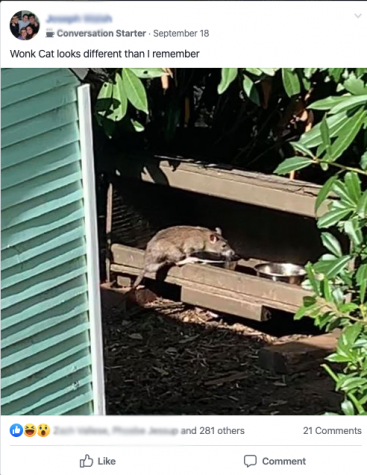 “Because of the social media and all the hype about it, and it being in a food service facility, it really just got blown way out of proportion,” said DeStefano. “But, you know, in reaction to that, we stepped up our service.”

DeStefano said the University hired a fulltime pest services coordinator this year to respond to complaints around campus. Facilities management employs a number of methods to eradicate rodents, including dry ice, traps with bait and rodenticide placed in burrows. These all have various levels of success.

“This is a college campus–there’s gonna be food around,” said DeStefano. “They’d rather eat pizza than bait.”

According to DeStefano, the most successful form of pest control is having one specialist pump carbon monoxide into a rodent den, while another identifies other exit holes watching for smoke come out of those holes. Then, they cover all the exits and wait.

“Hopefully, if the rat’s home, and in there, it quietly goes to sleep and doesn’t come out,” said DeStefano. “It’s already buried.”

To her, it’s clear that these efforts are working. She said 2Fix has received significantly fewer rodent complaints this year.

“We’ve increased our service and we’re just being very proactive, it’s impossible for the city to provide the level of service that we have on campus right now,” said DeStefano.

Councilmember Brianne Nadeau, who represents Ward 1, did not respond to repeated requests for comment.

The D.C. Department of Health’s website includes a daunting announcement that the city’s rat population is on the rise.

Gerard Brown, who oversees these operations, said in an email that in “recent years, the District has seen an increase in rodent activity. This problem is not unique to Washington, D.C. and it is believed to be the result of warmer winters, increase in population and an increase in the number of restaurants opening across the District.”

There are currently 139 bait stations in locations around the city, Brown said.

“Remember: Sanitation is the single most important factor for rodent control. Keep dumpster areas clean! Residents, visitors and business owners can work together to reduce rodent activity in our city!” said Brown. “We all must work together for a rat free D.C.”