An AU student protested the university’s investment in fossil fuels – she was fined, fired, and prevented from studying abroad

Step by step through AUPD, student conduct and the facilities management office’s handling of her case 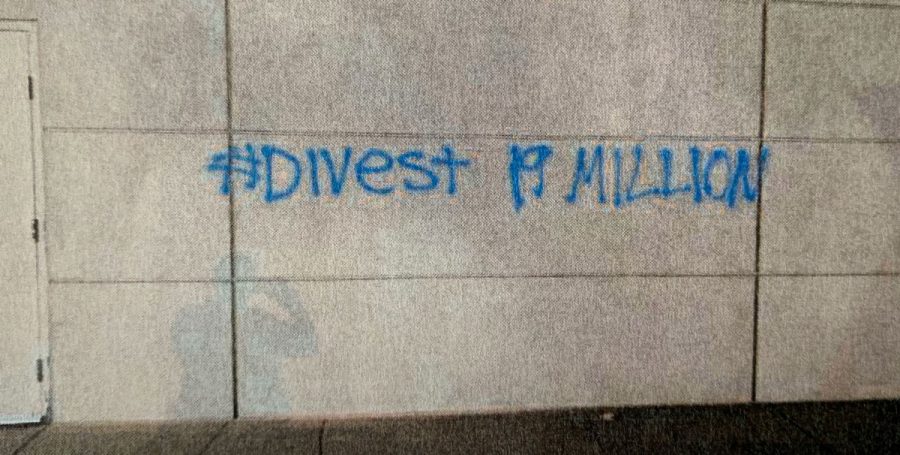 An American University student was fired from her campus job, fined $1,240 and put on year-long disciplinary probation after protesting against the university’s investment in fossil fuels.

Anna Elias is a member of Fossil Free AU, a group of student protesters who dispute American University’s 2018 announcement of carbon neutrality and commitment to sustainability. Their opposition is largely due to the university’s $19 million investment in fossil fuel companies.

The organization has protested around campus and at summits held by the AU Board of Trustees.

Fossil Free AU chose Thursday, Oct. 18, 2018, to chalk anti-fossil fuel messages around campus because the next day marked the beginning of parent’s weekend at AU, according to Elias. The university has ads and signs around campus when families visit with information and statistics relating to this achievement.

Elias was found guilty of violating the student conduct code by putting chalk on the exterior wall of the Katzen Arts Center during a protest. According to internal communications between the AU Office of Facilities Management and the student conduct office, she may have been charged restitution for other spray chalk all around campus. The person in the video evidence used against Elias is not identifiable.

On Oct. 18, 2018, Elias wrote “#DIVEST 19MILLION” in blue spray chalk on the exterior wall of the Katzen Arts Center. In an interview, she said the organization had used chalk on sidewalks and around campus in previous protests but had not put chalk on buildings.

“We chose chalk, obviously, because we didn’t want to damage anything, and it washes off with water,” Elias said.

She said that after checking the 2018-2019 student conduct code, she did not see any specific language against chalk on buildings. AWOL found an archived page from AU’s website in 2016 that states chalking on buildings is prohibited. This story will be updated with a link to the 2018-2019 conduct code.

At 11:55 p.m., a report was filed to the American University Police Department of ongoing vandalism on campus. According to Elias, three officers met her and three other students near the bus stop behind the Kay Spiritual Life Center. The other students’ names were redacted in the police report filed by AUPD Officer Michael Jones and they were allowed to leave the scene.

The police report stated that Elias “voluntarily handed over a blue spray chalk can from the bag she was carrying.” Elias admitted to putting chalk on the exterior wall of Katzen but denied involvement when questioned about chalk at other locations on campus.

AUPD did not respond to repeated requests for comment about the incident.

“I was really nervous … I asked: what’s going to happen?” Elias said.

According to Elias, Officer Jones said that she had violated the student conduct code, but would not face criminal charges. This is also expressed in the police report. Officer Jones noted Elias was advised “her actions were against campus policy and could be considered defacing property if the chalk is not easily removed.”

In her referral to student conduct, AUPD provided case materials including “pictures of signs throughout campus that were also vandalized using the blue spray chalk.” Elias repeatedly denied having participated in chalking other parts of campus.

There are two separate reports of graffiti kept in AUPD records for that night, one for Katzen and one for the main campus. Main campus is still filed as “pending.” AUPD also included photos of chalking done in other colors that were not collected from Elias. She denies having used any color other than blue.

Elias was charged and found guilty of violating the student conduct code for “intentionally or recklessly destroying or damaging university property or the property of others” according to her conduct case referral form.

The current student conduct code does not mention regulations on what is and is not allowed when students protest on campus. AU does maintain a freedom of expression policy, which notes that property damage and violating university police are prohibited in protests on campus.

Signs posted around campus recently, after another protest occurred over AUPD treatment of a black student who was forcibly removed from her residence, include language specifying that chalk is allowed on sidewalks, not buildings. 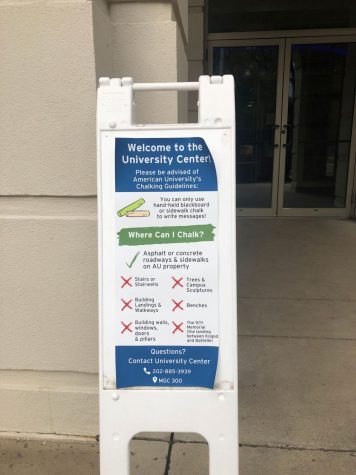 In a secure message from the Student Conduct office, Elias was informed that there was video evidence of her using spray chalk on campus.

“It was like … we have video evidence of you, you have a right to ask to see it in your pre-hearing meeting, this can be used against you in your hearing and I was like, what is this video evidence?” said Elias.

“This is when I knew this was kind of like a kangaroo court kind of thing,” said Elias. “Because I wasn’t in the video.”

“I knew I was up against, like, … people who didn’t know anything about anything but hold my academic career in their hands, basically,” said Elias.

Bobby Howard, who works at the Student Conduct office and helped compile the video evidence to review, remarked to Elias and AWOL that she was not visible in the security footage.

“I kept saying ‘I did Katzen’ but, like, if they don’t have other people, they’re either going to ask me for names or they’re going to make an example out of me,” said Elias.

She met with Katie Porras, the director of the student conduct office at AU, to discuss her charges. Porras did not provide AWOL with a comment related to Elias’ case, citing internal policy and confidentiality concerns.

“She was really just kind of trying to make me feel like shit,” said Elias. “She said basically, that I was reactionary and destructive and not productive in my activism and that my activism just took the wrong turn.”

According to Elias, it was at this point Porras said she would be placed on disciplinary probation, which would prevent her from studying abroad until her sanctions were lifted. She said she was scared to participate in other protests with Fossil Free AU, such as sit-ins or chalking on sidewalks, fearing she could be charged with violating her probation.

If a student is found guilty of a conduct violation while on disciplinary probation, it could result in their removal from university housing, suspension or dismissal from the university.

In November, Elias appealed her charges on the grounds of being “Insufficient/Excessive Sanctions,” according to her appeal form.

Elias met with Dean of Students Jeffrey Brown to review her charges in late November. She was employed by the university as a desk receptionist at the time of her charges and said she asked the dean if she would be able to keep her job. This would allow her to make the money necessary to pay off the $1,240 restitution from the charge.

Brown did not respond to requests for comment for this story, but reaffirmed that the university would not change her charges.

Two days later, she met with her boss, Community Director Victor Lopez, to discuss her future working with the university.

She received an email from Lopez later that day:

“Housing & Residence Life staff must abide by all University and local, state, and federal laws,” Lopez wrote. “As a result, you are terminated from the Desk receptionist position and are relieved from all job responsibilities and privileges effective December 12, 2018.”

“I was so depressed, this is hopeless,” Elias said.

Elias said her biggest regret from that evening was that AU workers had to remove the chalk because she said she believes “workers are treated like shit on campus.”

According to Mark Feist, assistant director of facilities operations at AU, the blue chalk Elias used was removed over a period of two days and required power washing to come off.

In a later conversation, Feist said it took a week to remove the chalk. At this time AWOL has not been able to confirm which of the times Feist provided is correct. Feist also said that after reviewing the cleaning process, facilities management should have charged Elias more than they originally had.

Feist denied that the facilities management office overcharged Elias, and repeatedly referred AWOL to the calculations that included restitution for cleaning that was not related to her case.

In an email chain that was heavily redacted by a former member of the student conduct office staff, Heather Kinsman, between conduct and the Facilities Management office an email was sent within the facilities management by Director Anthony Williams, asking: “were you able to clean all the project signs or did we have to order new ones?”

Kinsman also asked for total estimated costs in removing “paint in walls of building, prices for sustainability signage that were damaged.”

Kinsman and Williams’ names were revealed to AWOL only after Emily Arndt, the current senior administrative assistant at the conduct office, noted that Kinsman had been excessive in her redaction. It is unclear what specific policies the student conduct office has in place for the redaction of documents.

Williams did not respond to repeated requests for comment.

A timestamp on a photo one of Elias’ friends took the next morning showed the chalk was mostly gone, as recycling associates began cleaning that same night. 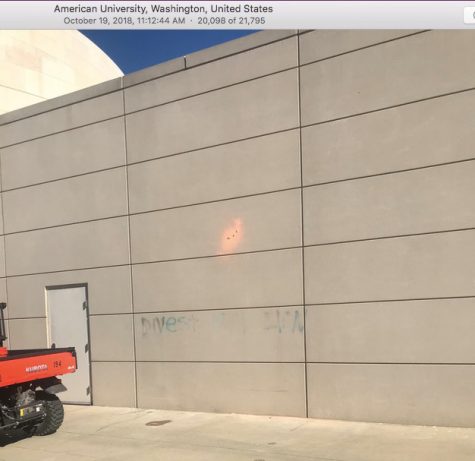 Elias’ $1240 charge, as calculated by facilities management, covers compensation for the recycling associates who removed the chalk. The fine accounts for 20 hours of combined work from five associates at a $62 per-hour overtime wage. Feist said this was standard practice since recycling associates usually have full schedules.

Even after Elias was found responsible for damaging property at Katzen only, the total cost was not adjusted to exclude the clean up around other parts of campus.

Elias’ disciplinary probation will be lifted on Nov. 20.

She said one of the reasons for her decision to move off campus came from her experience with AUPD and the months long dispute with the conduct office. She said she still believes she was charged for the entire university clean-up.

She will be allowed to study abroad next semester, once her disciplinary probation is complete.

“Maybe ‘traumatized’ isn’t the right word, but like I couldn’t sleep. I would close my eyes and just think about my future and just, like, what went wrong that night and what I could have done differently, like, so differently, so easily,” said Elias.

An AU spokesperson said in a comment for this story that “due to privacy concerns, American University cannot comment on the specifics of any particular case.”

*Editor’s note: in some documents, Anna Elias’ student email has been redacted for privacy and safety concerns.