Lockheed Martin is the largest defense contractor in the world. This means they provide weapons and services to the military branch of multiple governments, in particular the U.S. The company is also a top employer of AU students, specifically for the Department of Mathematics and Statistics. But several students disagree with the organization’s actions from a moral standpoint.

“I don’t think that recruiting students to work for an organization that lobbies to push the U.S. towards more violence is something I can feel comfortable allowing my school to support,” said AU freshman Hope Neyer, who handed out flyers detailing her issues with the company.

Moe Elsherbiny, another AU freshman, said he did not agree with the company’s decision to attend the job fair specifically on the anniversary of 9/11. He felt that the company would depict their focus on national defense as a way for students to “defend their country.”

“I think it’s important to point out that Lockheed Martin is using emotional manipulation to get kids to join. They [were] coming on 9/11 and if you had someone who was lost in 9/11, that hits very close to home,” said Elsherbiny. “If someone is telling you that you can help defend your country, you will do anything to do that.” 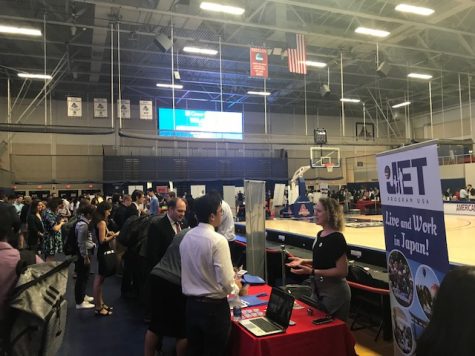 Neyer said she sees an issue with the company’s influence on past American wars.

“I think that war is good for a country’s spirit and countries know that. I think war is also good for profit and Lockheed Martin knows that. And when we mix up our national sympathies with our national agenda, we find ourselves in a moral grey area,” said Neyer.

Lockheed Martin’s past lobbying in support of the Iraq war and the use of their weapons in the recent conflict in Yemen are some of the examples Neyer and Elsherbiny gave when questioning the company’s morals. They said the company places “profit over lives” and is complicit in multiple human rights violations.

“In their code of conduct, Lockheed Martin talks about how they are committed to supporting human rights,” said Elsherbiny. “They are avidly, however, working to give weapons and give planes to states who they know have no interest in furthering human rights.”

When speaking about the university’s ties to Lockheed Martin, both Neyer and Elsherbiny said they were disappointed with the high numbers of former students working there. Both saw irony in the School of International Service’s slogan: “Waging peace since 1957.”

“AU prides itself on producing brilliant, civically-minded students, and it does,” said Neyer. “But sending those people to work for a company that has an emphasis on profit and not on social change isn’t something that aligns with my reading of the university’s values.”

Neyer and Elsherbiny, along with a few other students, spent hours handing out pamphlets that detailed their views on Lockheed Martin and why their peers should think twice before working there. They called this an “education action.”

“We just want to make sure students know who they’re talking to,” Neyer said. “When you go on Lockheed Martin’s website, it looks like an Apple store. There’s a lot of pretty blue skies and shiny metal. I think that lifting that curtain is important and recognizing just what they stand for.” 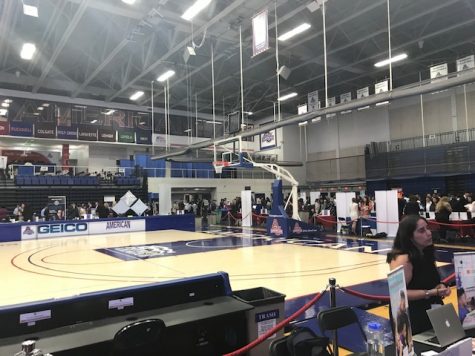 When asked what they would say to a recent AU graduate who needs a job and is considering Lockheed Martin, Neyer said: “I think that you have to look deeply into your own personal morals and consider the long-term effects of what you’re doing. But at the end of the day, I’m never going to look at someone and say, ‘you don’t get groceries, because it offends my morals.’”

This approach was echoed by Dr. Eric Novotny, a professional lecturer in the AU School of International Service and a former employee of Lockheed Martin. He stressed that it’s up to the employee to decide if their moral values align with the company’s values and that you won’t always agree with the actions of the organization you work for.

According to the AU Career Center, Lockheed Martin did not give a reason for the cancellation of their appearance at the job fair when they informed the school of that decision.

Lockheed Martin did not respond to repeated requests for comment.