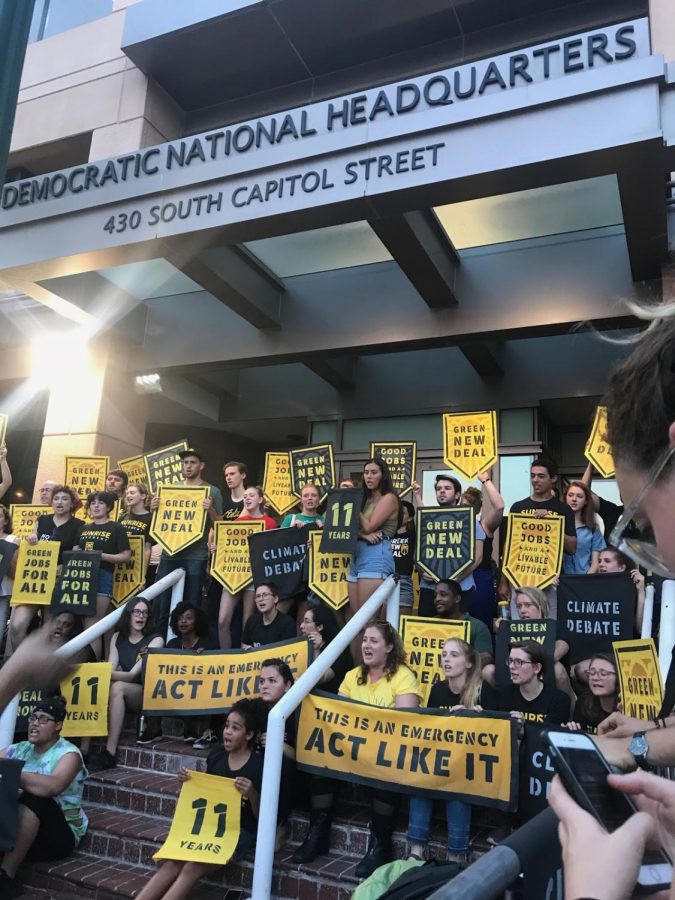 Protesters from the Sunrise Movement sing on the steps of the Democratic National Headquarters at 430 S. Capital St. They are protesting the DNC’s refusal to host a climate debate. (Sasha Fernandez/AWOL Magazine).

The Sunrise Movement, a climate change political action group, hosted a watch party for the first Democratic presidential debate outside the Democratic National Committee’s headquarters in Washington yesterday. This was part of a series of ongoing protests led by the organization.

In response, Sunrise has been protesting at the DNC headquarters since 12 p.m. on June 25.

“We really thought that the DNC would respond to us before now, but they locked the door, set up the guard rail … and have been mute,” said Isa Flores-Jones, a member of the Sunrise press team. “We have not heard a word from Tom Perez or from the DNC since we got here.”

Sunrise had initially scheduled the debate watch party at The Dew Drop Inn, but relocated it to the site of the protest. “We decided to host this watch party, right here on the steps of the HQ, to send a message that we are keeping the media establishment accountable by [fighting for] hosting this climate debate on the climate crisis,” Flores-Jones said.

According to Sunrise’s website, they are a youth-led movement that has worked with Rep. Alexandria Ocasio-Cortez and Sen. Ed Markey on the Green New Deal. The vast majority of protesters were college-aged students.

Before the debates started, Sunrise protesters met in small groups after waiting outside for over 30 hours in 90 degree heat. They sat on the steps eating different donated snacks

Joshua Álvarez, a former Peace Corps volunteer, argued that the climate debate would be a way for voters to understand the candidates and their policy positions on climate change.

“We need to know that they have concrete solutions,” said Álvarez. “Enough of the small talk.”

In response to the calls for a climate debate, Tom Perez, the Chair of the DNC, published a post on Medium. Perez said that climate change is an “urgent threat,” writing: at “That’s why, beginning in 2017, I made clear to our media partners that the issue of climate change must be featured prominently in our debates.”

However, Perez has refused to host a climate change debate because he said it could create issues of fairness.

“If we change our guidelines at the request of one candidate who has made climate change their campaign’s signature issue, how do we say no to the numerous requests we’ve had?” Perez wrote in the post. “How do we say no to other candidates in the race who may request debates focused on an issue they’ve made central to their own campaigns?”

As the debate started, protesters sat on the pavement and on sleeping bags as they watched the debate illuminated on a screen at the top of a truck. While protesters had been singing earlier in the day, there was a lull as the crowd softly talked and ate as the debates began.

There were cheers for Sen.Warren when she mentioned up green jobs, a major component of the Sunrise campaign.

During the first commercial break, a protester stood up and asked: “How many climate questions have been asked?” to which others replied “zero!”

In the second half of the debates, moderators asked a few climate-related questions. Protesters applauded for Gov. Jay Inslee, who mentioned climate change as “an emergency.”

At the end of the night, there were a total of four climate questions asked to four out of the ten candidates.

As the debate closed, Varshini Prakash, the co-founder of the Sunrise, released a statement in response to the first Democratic presidential debate. “Only four candidates had the opportunity to discuss [climate change] at all. This is downright irresponsible and shameful,” said Prakash.

In addition, Sunrise tweeted, a picture of the protesters in sleeping bags.

Good night from Day 2 outside the @DNC. We're feeling disappointed & angry after tonight's #DemDebate, and we're sweaty & tired, but our spirits are high.It's clear that we need to be here. The adults in power don't have their act together. Our survival depends on what WE do. pic.twitter.com/Vni5xnxK8L

Sunrise protesters have not given up. They have launched a petition to host the debate and are determined to see climate questions and points made.

Protesters are staying at the DNC headquarters and do not have any plans of leaving. According to Flores-Jones, Sunrise will prioritize the health and safety of the protesters, but they plan to stay, she said, “as long as it takes.”

The DNC did not respond to repeated requests for comment on the protests.