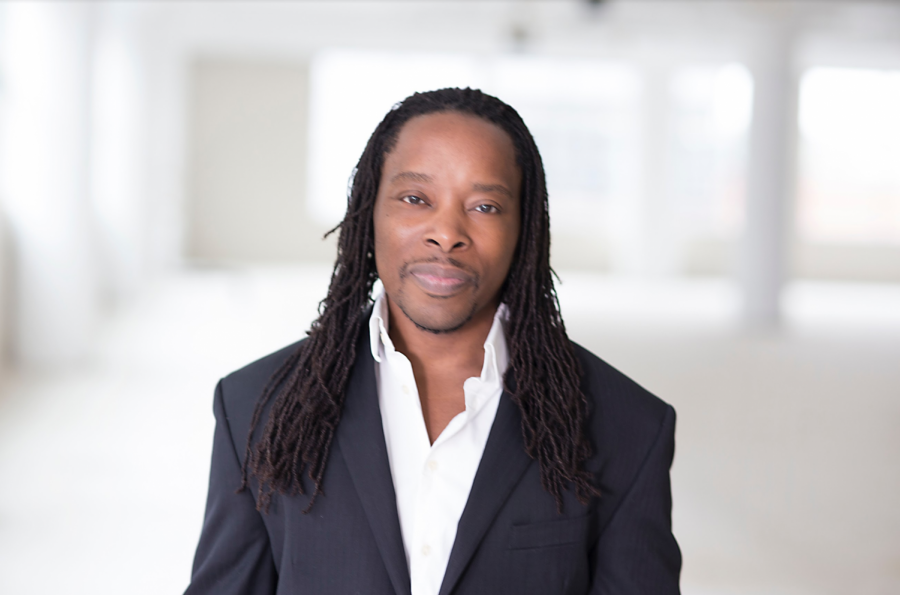 Omékongo Dibinga is a motivational speaker, trilingual poet, TV talk show host, rapper, and professor of cross-cultural communication at American University. His Urban Music Award-winning work has best been described by Nikki Giovanni as “outstanding, exciting, and new while being very old.” His book, “From the Limbs of My Poetree” was described by Essence Magazine as “a remarkable and insightful collection of exquisite poetry that touches sacred places within your spirit.” He was one of 5 international recipients out of 750,000 to win the first ever “CNN iReport Spirit Award.”

I know that currently, you’re teaching the complex problems course Global Hip Hop and Resistance. What is that class about and why did you choose to teach this class?

Yeah, so one of the things I’ve learned is that there are many people of all ages, even people my age and I grew up as hip hop was starting, who just aren’t really that familiar with hip hop’s power. They pretty much associate hip hop with whoever their favorite artist is, whether it’s somebody they came up with for a long time like LL Cool J or Will Smith or current guys like J. Cole. They identify with the music that they listen to. People don’t know for example, in Portugal, when youth were protesting in the 90s, they were playing MWA songs, you know “F the police”.

Or in the Arab spring, from a couple of years back, all of that started from the words and the work of a rap artist. And so, people don’t realize wherever there’s been resistance in the past 30 or 40 years, particularly with young people, hip hop has been a part of that. So I just want people to understand the music beyond something they just bop their heads to. I don’t see any other music form in recent years having been used as a tool of resistance on this large scale as hip hop so I wanted students to be aware of that.

You talk about inspiring all to take a stand when they witness an injustice. I was wondering if you could elaborate on what that means to you.

So, I tell students in my class, I want them to be educated and scholarly. But when they leave my class, I want them to be more activist-minded. I want them to just give a damn about something. In my other class, cross-cultural communication, we touch on issues from homophobia to black lives matter to disability to sexism, the list goes on and on. And I tell them, when you leave my class, depending on the circle that you are in, you may not have to have a conversation about any of these issues anymore because they don’t affect you. But if you’ve learned about it, and you’ve learned that you can make a change, can you do that? Can you help be the voice for the voiceless? That’s what I mean when I say I want everyone to just take a stand- either for themselves or for people who need help taking a stand.

How can music and art manifest social change?

Behind any movement, there has been music in some way, shape, or form. Even if you go back to slavery, the roots of hip hop are African so we talk about hip hop being a transition from African music. But, drums being outlawed you know. But that was a tool for communication. And through song, things that became the Negro spirituals, those type of things were about escaping plantations, about rebellions, and so music has always been used. I think a lot of people who are musicians need to understand that more. There’s always been a message in the music, and not always just resistance, some is just feel-good party dance, but there is a revolutionary side to it that has always been there that I think people need to understand, particularly in a time and space where we need it now more than ever.

As the hip hop industry has become more commercialized, has that changed the movement for social change?

It hasn’t changed the movement cause the movement continues, but it is harder to get a voice in mainstream hip hop with a revolutionary message. So, mainstream hip hop isn’t as much a part of the resistance movement as it used to be. So if you back in the 90s, you have groups like NWA, and triqual quest?, and public enemy, so some were more militant, but even if you look at some NWA’s lyrics, beyond some of the things people consider to be misogynistic, there were real messages there about police brutality, drug proliferation, about not having . So even on those levels, more of the music that was broadcasted was uplifting, or not even necessarily uplifting but educating. Conscious-raising. And now it is not so much the case. And in a Trump presidency world, you do have people becoming more vocal. I think some rappers have become more complacent under Obama cause they thought some things were cool.

But what you also see is mainstream artists like Jay Z who put out music that could be conscious-raising but they don’t get airplay on the radio. Minority Report, Jay-Z’s song about Hurricane Katrina,- powerful song, couldn’t get played on the radio. Despite him being at the height of whatever people call mainstream hip hop. Still, face a little bit of backlash from what mainstream audiences want from their artists. But many of them are still doing it anyway but we have to do the work to listen to it. Cause it’s not likely that the social conscious, uplifting, revolutionary song is going to be the single of somebody’s album.

You’ve worked as a motivational speaker. What inspired you to go that route and what are your main messages?

As a kid, I was bullied a lot, because of my name, my background. I was depressed a lot, I was suicidal in my 7th-grade year. I came out of that by learning more about black history and that inspired me to want to do more to make my ancestors proud, make my parents proud. As I was doing that, that’s when I started to get into the work of Nikki Giovanni and Maya Angelou. If I started to learn things from them, I started to share their messages with other people in my community. My parents would organize community events and I would perform poems by Maya Angelou and Langston Hughes to motivate other people. Then I started writing my own stuff. The roots of my motivation was as I started to learn about myself, I wanted to help other kids learn about who they were. As I got older, I started writing my own poetry, hooking up with actual motivational speakers. And there was a study that came out, I think Harvard did it, that said if you hear a negative comment once, you have the hear the positive opposite 16 times before you believe it. So I just wanted to be one of those 16 positive voices that people can hear.

What has your work with youth been like in general? Youth development work- How has that work motivated you?

When I talked to you earlier about being one of those 16 voices, I want to get into the lives and minds of as many young people as possible. I was in Rwanda doing work in orphanages or I’ve been in prisons here. I know a lot of decisions that young people make come from the lack of presence of some people in their lives. I just want to let them see something different. A lot of students or young people i run into say, “I’ve never seen or had a black professor.” So a lot of people think that’s not even possible and I’ve heard that from not even black students. I want to show them- you can do hip hop this way, you can do motivation this way, you can have a career as an upstander this way. I just want them to see different options and I wanna let them know that whatever they’re going through,  they can overcome it. There are better days ahead for them. Young people need hope and I just feel like we’re throwing them away. And I wanna let them know that they can help other people, as leaders as well. I want to promote diversity of thought on our campus. If you take my course, whether you love it or hate it, you’re gonna get diversity of thought.