Killer Looks: The fascination of serial killers in pop culture 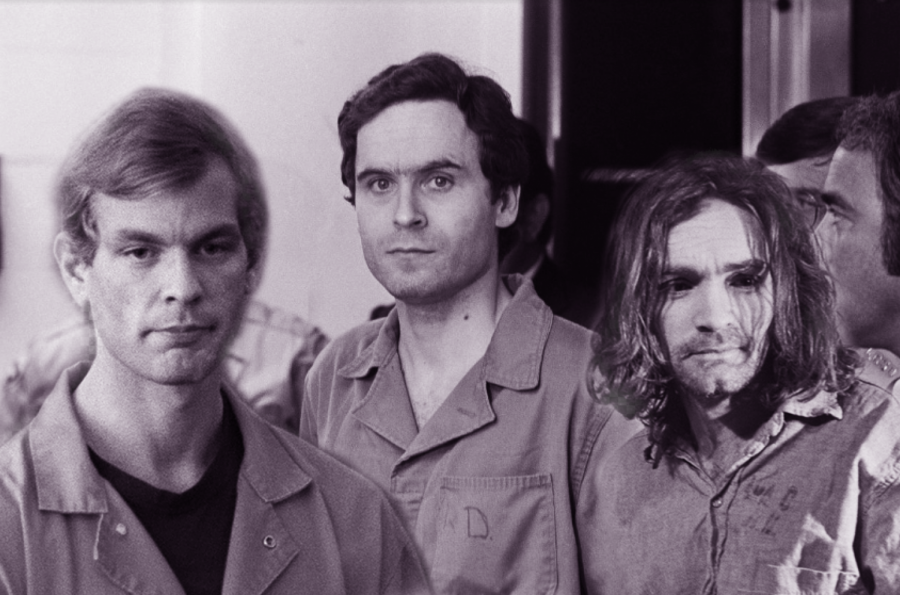 Jeffrey Dahmer, Ted Bundy, and Charles Manson (photo has been photoshopped by artist).

Trigger warning: Topics such as sexual assault, rape, dismemberment, and murder will be discussed throughout the course of this article.

From the wildly popular Netflix show “You,” starring Penn Badgley, former “Gossip Girl” star, playing a boy-next-door bookstore clerk who happens to be a stalker, to the trailer for “Extremely Wicked, Shockingly Evil, and Vile” having Zac Efron playing serial murderer Ted Bundy, audiences have turned to social media to discuss the growing fascination with serial killers, stalkers, mass murderers, and the like.

In many ways, true crime culture’s ongoing fascination with evil men like Bundy and the problematic reception of Joe on “You” seem to go hand in hand. Released 30 years to the day of when Bundy died in the electric chair at Florida State Prison, the four part Netflix docu-series “Conversations with A Killer: The Ted Bundy Tapes,” painted a darker picture of the convicted serial killer, whose deeply troubled psyche led him to carry out an estimated 30 murders.

In the film’s trailer, Efron-as-serial-killer grins, winks and charms to the tempo of a catchy rock tune.

“If you didn’t know better, you’d think you were watching a preview for a fun and fast caper about a relatively harmless criminal in the style of “Catch Me If You Can,” rather than a biopic about a monster,” said Jack Levin, Northeastern professor,researcher and author.

“I’ve seen a lot of talk about Ted Bundy’s alleged hotness and would like to gently remind everyone that there are literally THOUSANDS of hot men on the service – almost all of whom are not convicted serial murderers,” the tweet from the official Netflix account reads.

Badgley similarly responded to the hordes of online fans who admitted to finding his “You” character attractive, to actively rooting for Joe in spite of his blatantly violent and controlling tendencies.

“Penn Badgley is breaking my heart once again as Joe,” one Twitter user wrote. “What is it about him?”

“A: He is a murderer,” Badgley matter-of-factly replied.

Although one fictional and one biopic, these films and tv shows are not the first of their kind. “My Friend Dahmer,” the 2017 movie was originally written as a 2012 comic book by John Backderf, a comic book artist known as Derf, who went to the same school as Jeffrey Dahmer. His account of their friendship and growing up with a serial killer was marketed as: “There was always a darkness about him.

Dahmer, also known as the Milwaukee Cannibal or the Milwaukee Monster, was an American serial killer and sex offender who committed the rape, murder, and dismemberment of 17 men and boys from 1978 to 1991. Killed by a fellow prison inmate in 1994, Dahmer had become infamous just a few short months after his arrest in 1992. However, the fascination of cannibalism is one that has also been explored such as in the “Hannibal” movie and, later, television series.

Thomas Hargrove, investigative journalist and founder of the Murder Accountability Project further explained that “we’ve been fed a line that serial killers are fascinating, evil geniuses whose misdeeds warrant a near-obsessive degree of analysis.”

Hargrove founded the nonprofit in 2015 to track unsolved homicides nationwide. Authorities in Youngstown, Ohio, and Gary, Indiana, opened new homicide investigations in 2010 as a result of Hargrove’s findings. The algorithm’s identification of 15 unsolved strangulations in Gary was corroborated in 2014 with the arrest of Darren Deon Vann, who confessed to killing women for decades and then took police to abandoned properties in Gary where the bodies of six previously unknown strangulation victims were recovered.

However type-casting the charming serial killer has also been a theme of public debate. Badgley, whose character on “Gossip Girl” turned out to be yet another man prone to stalking the people he hoped to control, put it as such: “Would anyone else be considered unassuming on the side of the street standing there too long? It’s pretty evident that no one but a young, handsome white man could do that.”

Refinery29 writer Ashley Alese Edwards declared as much. “The Ted Bundy of America’s consciousness is a myth,” she wrote. “Bundy was not special, he was not smarter than the average person; he did not have a personality so alluring that his female victims could not help but simply go off with him. … What Bundy did have was the power of being a white man in a society that reveres them.”

However, the “types” of serial killers range far and wide according to Dr. Michael G. Aamodt, an American industrial and organizational psychology professor at Radford University who has published more than 50 professional journal articles and presented more than 100 papers at professional conferences and also began the foundation of the Radford Serial Killer Database. Today, Aamodt works with Hargrove in the MAP for compiling the largest non-governmental serial murderer database in the world.

According to Dr. Aamodt, documentarians, filmmakers, and showrunners eagerly dive into the minds of these predators, hoping to shed light on the inner demons that make our sociopaths tick but often, the mystery is less complex.

“I think that there is certainly more of a fascination with serial killers than kidnappers or people who rob banks but if you think about throughout history, like Bonnie and Clyde, there have been criminals who have taken society’s interest and really make good movies,” Dr. Aamodt said.

Levin, who has spent his career studying murder and violence, was among the first to conduct a comprehensive study about serial killers in the early 1980s. With numerous television appearances and nearly three dozen books to his name, Levin is so widely known in the field that Charles Manson had a nickname for him: “Jack the Jackal.”

“Why don’t we want to believe that beautiful people can do terrible things?” Levin said. “Certain people have always been drawn to those who violate the social contract, parading their edginess by wearing pictures of Charles Manson on their T-shirts, or writing to serial killers in prison.”

Levin’s latest book, with co-author Julie Wiest, “The Allure of Premeditated Murder”, examines the motivations of killers who plan their attacks. Drawing on his extensive research and interviews with convicted murderers over the years, including Manson, the sociologist helps us understand what sets apart serial killers and mass murderers from other violent perpetrators.

According to Levin, a serial killer is conventionally defined as a person who murders three or more people in a period of over a month, with “cooling down” time between murders. Dr. Aamodt, however, noted that this “cooling down” time has been a difficult element to agree on which is why the greater importance is usually set on the number of incidences.

“They have certain skills which allow them to get away with murder for a long time,” Levin said.

They lack a conscience but are well versed in the art of manipulation. In many cases, the perpetrators are eventually caught, said Levin, but unfortunately not before they’ve amassed a significant number of victims.

“It is interesting though that there has been a substantial decline in the number of serial killings in the last 30 or 40 years because really, the heyday for serial murder was really the decade of the 70s and 80s,” Levin said.

However, the problem with catching serial killers is partially due to the volunteer reporting system of police departments to report to the FBI, according to Hargrove.

“They can’t demand that police departments participate and they can’t enforce anything so it’s a voluntary reporting system which is obviously problematic,” Hargrove said.

Hargrove explained that while Levin’s claims that serial killers’ heydays were the 70s and 80s is a common one, the problem with analyzing the increase or decrease of serial killers as a whole has been due to the creation of the term in the mid-70s.

“Serial murder is on the decline, we’re far less likely to kill in a series than we were 30 years ago and we aren’t quite sure why,” Hargrove said. “But maybe it’s because the FBI created the term serial murder in the mid-70s and that then became the plot of several Hollywood movies and TV shows so even though it might have been in the entertainment sector, we also started talking about them more.”

Hargrove said he thinks the public fascination with serial murder is possibly tied with their decline, and thus, an urge to have it increased in entertainment media. But Hargrove is also one to point out that courts have also been becoming more proactive on seeing signs for psychopathic behavior.

Levin on the other hand also added that the vast majority of people who happen to be fascinated with serial murder see it as an escape.

“There are people who are scared to death, they’re concerned that they might be the next victims but I think this is especially true of women who happen to be interested in serial murder,” Levin said.

Yet, according to Levin, most homicide victims are men, not women but the one exception is serial murder where women victims disproportionally are the victims of serial killers. Then, Levin notes individuals who may be perversely interested in serial murder.

“There are a few, fortunately, only a few, individuals that actually identify with the serial killers,” Levin said. “They would love to take lots of lives, have a large body count, torture, or make victims suffer, but they have a conscience that stops them.”

Levin later said, “At best, they seem to just be able to read and view serial killers from the media and that makes them live vicariously through the exploits of their heroes. This bothers me because these are the potentially dangerous people who might ultimately become too much like the people they idolize but fortunately, I think there are very few.”

As for where the fascination for serial killers stems, Hargrove says he’s unsure if it has more to do with the desire to weed them out rather than romanticize or sexualize them.

Levin emphasized though that the most unfortunate thing is that when society makes celebrities out of monsters, further encouraging the copycat phenomenon. This tactic has been utilized by mass and serial murders for decades, further encouraging these killers to leave messages behind. But Levin theorizes that if the news media coverage focused more on the rescuers rather than the murders, society would have a new copycat phenomenon on its hands.

“Maybe people would want to save lives rather than take them,” Levin said. “If we were to pay more attention to the good people in our society, we might actually find more who imitate them and in other words, we could use this phenomenon to help us not hurt us.”