All work and little pay: RAs’ experience at American University 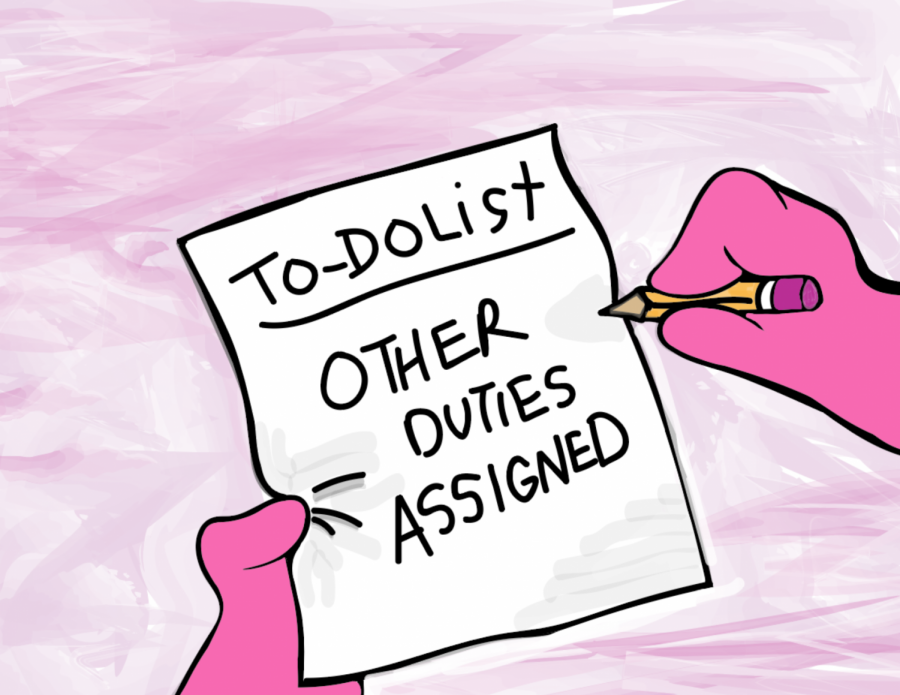 Koji Wieber and Isabel MacCay, both former freshman resident assistants, have had mixed experiences with their job. This is true for several other RAs. These problems are a result of vaguely worded contracts full of grey areas and unclear guidelines.

These problems include the training process, unfair pay, and the RAs being swept into other responsibilities that ultimately are defended by using the “other duties as assigned” clause of their contract.

Both Wieber and MacCay stressed how valuable the job was to them, particularly having the honor of mentoring and getting to know so many students in their time. However, because of the training process, the number of hours worked versus compensation received, and an overwhelming number of responsibilities they had to undertake, they found themselves unhappy with the role.

“RAs’ problems are swept under the rug a lot,” Wieber said. “There are a lot of other problems on campuses that need to be addressed…but [treatment of RAs] is a big problem and will continue to be for a while.”

Because of the “Team Member” and “Community Facilitation” clauses in the job description, current RAs have requested to comment anonymously out of concern for losing their job.

One of the problems highlighted most was the training process that RAs complete each semester.

Whether or not RAs have gone through training procedures before, each semester there is an intense training curriculum that the RAs must go through. In the fall, there is a 12-hour-a-day, six-days-a-week training period that lasts for two weeks. Most of the day, RAs are in presentations and lectures.

Around 9 p.m., when RAs are done for the night, they must work on their bulletin boards and door decorations in preparation for their residents to move in. Some are up until 1 or 2 a.m. after a twelve hour training day, then have to wake up at 8 a.m. the next day for more training.

“You are getting paid a flat amount, and a lot can get shuffled under that umbrella,” said Wieber. He alluded to the “Other Duties As Assigned” clause in the job description as well as the housing stipend RAs are given.

RAs at American University are given free housing and a $350 stipend each month. RAs are not given a meal plan, yet many are required to purchase one.

MacCay, a senior in her final semester who left the job after becoming a part-time student, also expressed concerns with the intense regulation of the job.

In the fall of 2017, the administration changed from Housing and Dining to Housing and Residence Life. With this shift, new policies included each hall having to have ten “events” per semester. These events can be movie nights or other activities to provide the residents of the floor a way to bond and have a positive activity to go to.

In the fall of 2018, this became more regulated, with the requirement to have two events per month instead of the general ten throughout the semester.

“It took away agency from the RA… I would put on programs when I felt my floor needed them,” MacCay said.

She recalled a time when she wanted to address an incident on her floor with an event to educate. This instance was in a month when she already completed the two programs for that month. While Housing and Residence Life subsidized it, the extra event would not count towards the final ten she needed to fulfill her job requirements.

“At the end of the day, I can’t do supplemental programs and ten programs. I need the programs that I do, that meet my floor’s needs, to count as my job requirement,” MacCay said. “That focus came from a very good place, but a lack of knowledge of what the RAs were already doing.”

The RA job description as of the 2019-2020 hiring process outlines the several responsibilities and expectations that an American University RA must fulfill. This document includes GPA requirements, meetings to attend, role model expectations, and several other points.

The “other duties as assigned” section of the job description is the center of frustration for many RAs. Several jobs assigned are not seen as an “emergency” or “unforeseen circumstance” in several RAs’ opinions.

For example, this past spring semester, RAs were forced to volunteer for New Eagle Day, an event that welcomes prospective students to American University.

The administration made this event mandatory for RAs to attend because “it is extremely important to have all hands on deck for this event as [RAs are] expected to make these incoming students and their families feel welcome.” RAs were not compensated for this event.

RAs are written in the job description to be “team members” and “role models” in their contract. While RAs are expected to be role models to their residents and on campus in general, it was questioned within the RA community that this job was assigned only to RAs, and only to freshmen RAs.

Still, RAs do not often come forward to the administration.

When asked about why this event was given to RAs, Freeman said, “I would not limit the ‘other duties as assigned’ as solely those two areas [emergency or unforeseen circumstances]…it is not limited to those two areas you identified.”

Yet, the “other duties as assigned” clause states: “The nature of the RA position does not allow for all duties to be explicitly described. There will be times when hall staff is requested to assist in an emergency or other unforeseen circumstance. These situations will be presented as thoroughly as possible at the time of need.”

In response to New Eagle Day specifically, Freeman said “it was a yearly activity that students were involved in and not sprung on students at the last minute.”

“The minute we start listing things, if we leave something out, we are bound by the list we created. We don’t try to use this in a way that is reckless, we make sure what we ask staff to do aligns with the work that they do,” Freeman said.

Yet, the “other duties as assigned” clause cause this very issue. Many RAs do not come forward with these complaints to the administration.

“There is not much incentive to come forward and say something for fear of repercussions or push back from your supervisor,” Wieber said. “It is hard to push back against because it is technically in the contract that you signed.”

Freeman urges students to come forward. There is a student staff advisory council that provides space for RAs to express their concerns about the job. For individual concerns, the RA is encouraged to meet with their Community Director. The council meets typically every other week.

“I am big on having an open door policy,” Freeman said.

There is also a large difference in responsibilities between freshmen and upperclassmen housing. RAs interviewed believe this difference is not being taken into account.

“There is a huge disparity in placements as an RA,” MacCay said. “If you are in Nebraska, you have a whole apartment to yourself with less than half of the [number of residents] of other halls. In general, you do a lot less work and receive a much better living situation.”

Other examples of disparity include freshman RAs holding required “intentional interactions” with each resident of their floor. The RA must meet with each resident twice a semester to check in on how the student is doing. A follow-up email is sent to the community director for proof. While worthwhile for mentorship, one RA must contact upwards of 50 residents twice a semester.

Yet, a large number of RAs have stressed that these problems are not necessarily a reflection on the current administration or their superiors, the Community Directors of buildings.

Both current and past RAs agree that the Community Directors specifically are not to blame in the matter. Rather, the problems with the job are in the contracts, the training process, and that there are several grey areas that allow for the job to be exploited.

It is a question of whose responsibility it is to solve this issue, and when that would occur.

This issue is not exclusive to American University. RAs at George Washington University attempted to unionize in the fall of 2016, but the Service Employees National Union Local 500 withdrew days before the vote after months of organizing. The director of higher education at the union, Anne McLeer, stated it was because the timing was not “ideal.” The vote was before finals exams at GW. They would have been the first private university to have resident advisors unionize.

“I want to push back on the notion that it is just AU, it’s really not,” Wieber said.

American University’s issues in treating RAs also affects their work as full-time students. MacCay shared the academic pressures felt while she was an RA.

“While I felt like my direct bosses were very supportive of academia, I felt there was an overall misunderstanding of what it takes to be a good student. If I was the best RA I could have been, I wouldn’t be able to have a GPA higher than 2.5,” MacCay said.

The “other duties as assigned” clause is a root of several issues RA’s struggle with the role. The expectations for RAs do not put into consideration the academic responsibilities the students have.

“No matter the school you’re at, it is just going to be a problem, because there are so many underlying issues,” Wieber said.