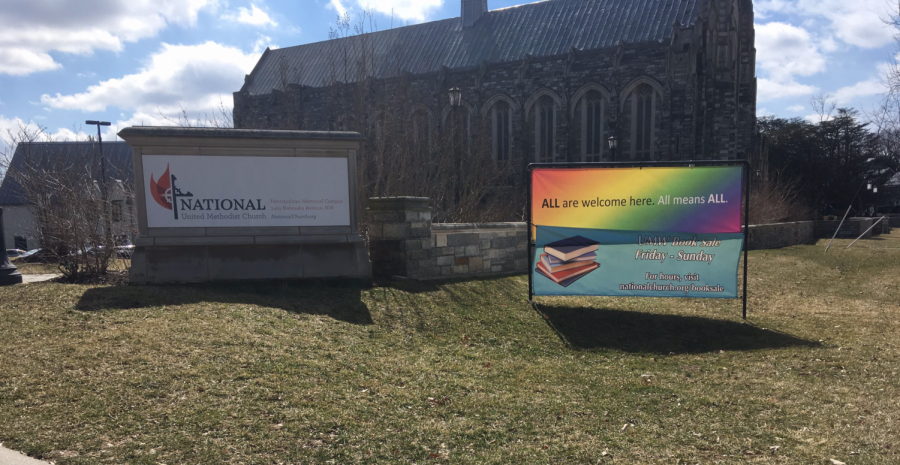 American University released a statement February 26 affirming its support for the LGBTQ community, following a February 25 vote to ban gay and trans clergy from the United Methodist Church.

The vote rejected the “One Church Plan,” which would have allowed churches to decide their own policies on inclusion for LGBTQ members and clergy. The plan also set up annual conferences that would have allowed LGBTQ people to serve openly and without punishment in the clergy.

AU Chaplain Rev. Mark Schaefer sent out a letter the day after the vote asserting that the university will continue supporting all students, no matter what their sexual orientation is.

“To the LGBTQ members of our university community, I cannot know how you must be feeling,” stated a letter sent to student emails. “Please know that I see you, I hear you, and that I remain your chaplain regardless of the outcome of the deliberations.”

Language from the Methodist Church saying “homosexuality is incompatible with Christian teaching” was inserted in 1972, according to Schaefer. This language, he says, has been resisted by members of the church.

According to Corie Maguigad, president of the Methodist association at AU, this petition gained approximately 15,500 signatures within 24 hours.

Rev. Joey Heath-Mason, a Methodist pastor at AU, discussed the difficulties of being openly gay in his position. He included the fact that he was refused ordination due to the church’s rules, yet continues to serve as a pastor.

He also discussed the importance of him being a resource for students.

Students at AU who are part of both the LGBTQ community and the Methodist community expressed their disappointment and anger at this decision.

Some students, like Kada Jackel and Harry Ehlers, expressed negative sentiments in response to this decision.

Jackel described a new pastor back home who openly shared opinions against LGBTQ people serving in the church.

“It feels like I don’t belong here,” Jackel said.

Ehlers describes the effect it has on him and his mother, who is a Methodist pastor in New Jersey.

“I was really disheartened and saddened,” Ehlers said. “This is not who Methodists are at our core.”

AU’s Methodist affiliation continues to have a strong impact on the community at AU among students, which Schaefer emphasizes.

“I believe the UMC needs AU,” Schaefer said. “So I think we have a role to play in helping the UMC in becoming more inclusive and I hope that we take up that role.”

“There are a lot of folks standing up and saying this was a really close vote. And to say that this is who we are as a church is a misrepresentation,” Heath-Mason said. “While it’s not a majority, it’s a very close minority. I see a lot of hope in there. I think there’s a lot of opportunities to see change.”