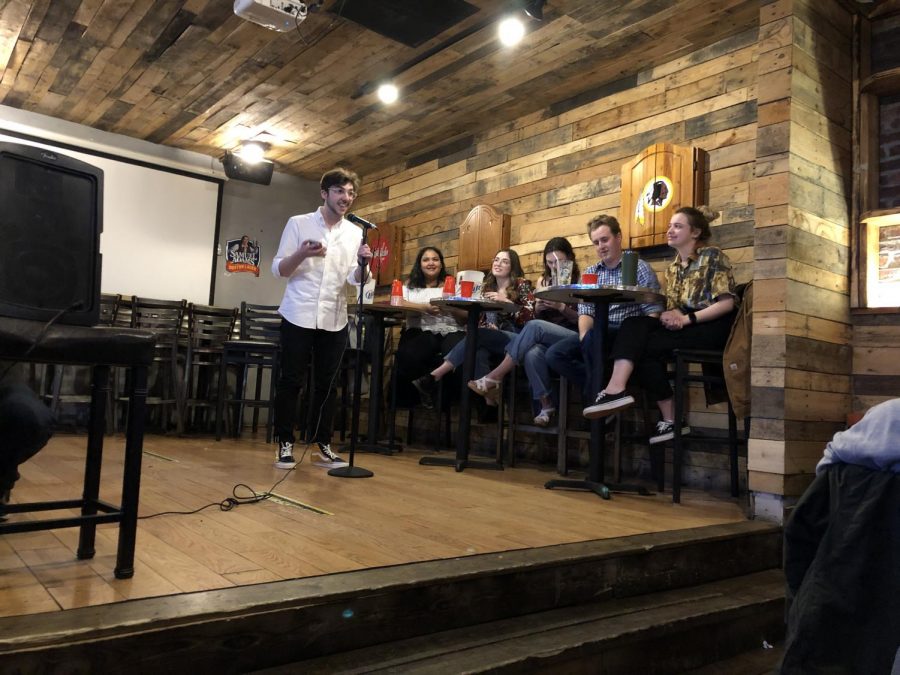 An AU student preforms a standup routine at Tenley Bar and Grill on February 16.

Tenley Bar and Grill in Washington DC has a new bi-weekly show to offer the students of American University and the residents of Tenleytown.

“If I put on a comedy show for you and figured out the logistics, would you do it?”

That’s the question Rebecca Lamis, a junior at American University, asked her friend Katey Clausen, another junior, at the end of the fall semester. Given the free time over winter break, Lamis decided to make her goal of putting her friend’s comedy on stage into a reality.

A month later, Lamis produced her first AU student comedy show, “Better Than Therapy,” at Tenley Bar and Grill. The show featured six students, all new to comedy, and sold out.

What began as a joke between two friends expanded into a comedy series on Saturday nights. While the series is just starting, the show has already gained tremendous popularity.

“There’s a demand for this, which is really exciting,” Lamis said, who is fully prepared to keep her comedy series running on a bi-weekly basis. “It’s kind of the start of my career essentially, and it really makes me want to do more of these.”

Every student who performed was new to stand-up comedy but kept the crowd laughing for an hour straight.

The jokes told by the students tackled a range of topics that targeted the heart of the typical AU student. There were jokes about Tinder dating, coming-out to parents, and accidentally giving an ex a pair of AirPods. It was evident that the crowd could relate to the jokes being told to their own experiences as college students.

After the show, many students expressed their eagerness to hear more content from performers who were their own age and attended the same university.

“It’s AU kids doing it, so it could be anything,” said Colleen Lloyd, a senior at AU.

Not a single performer was experienced in stand-up comedy, but according to Lamis, that is never a barrier to success in her shows.

“All you have to do is be a funny person and a storyteller,” Lamis said.

Noah Stevens, a sophomore at AU, performed his first stand-up set at “Better than Tinder.” While wanting to do comedy for a while, Stevens never had the chance to perform.

“I’ve wanted to do standup for a while; it’s just hard to do at a bar when you’re not 21,” Stevens said.

Lamis is creating a unique space for students to perform at a venue off-campus for a group of their peers. By producing a comedy show in a local restaurant, Lamis is establishing a connection between the AU population and the families of Tenleytown. Many locals sat at the bar and laughed along with the college-targeted jokes.

Each show will feature new talent, and may soon include a video application process to perform. Given the two sold-out shows, Lamis plans to continue her comedy series on a bi-weekly basis on Saturdays at Tenley Bar and Grill.