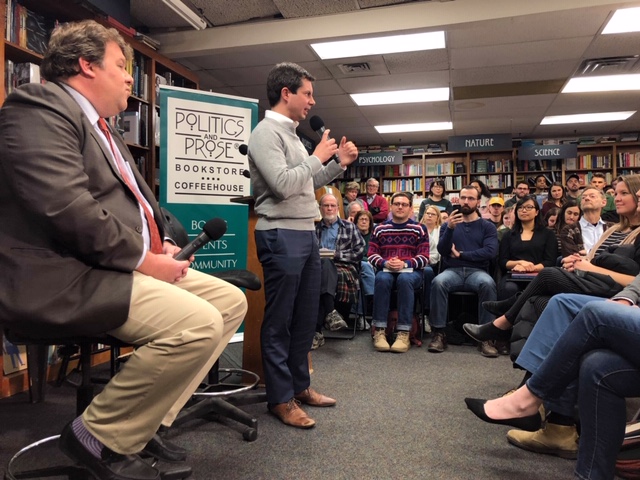 Pete Buttigieg, mayor of South Bend, Ind., spoke to a crowd in the Politics and Prose bookstore on Sunday night about his book “Shortest Way Home” and the possibility of his run for the presidency.

While being interviewed by Jonathan Allen, a political reporter for NBC News, Buttigieg spoke about his experiences as an openly gay man in politics, as well as his time serving in Afghanistan and being a Democratic mayor in a red state.

The crowd packed themselves into the bookshelves of Politics & Prose, craning their heads to catch a glimpse of the 37-year-old mayor as he talked with Allen.

While not a household name, Buttigieg is garnering recognition through his book and media interviews. The majority of questions from the crowd focused on his book, but many voiced questions concerning his potential presidential campaign during the Q&A session.

One major topic in Buttigieg’s book was the improvements that he was able to bring to his city of South Bend, a place once described as ‘dying.’ He emphasized his policy of collecting real data on problems within the city to start improving it from the ground up.

Improvements were made through techniques such as setting up a 311 system for residents to send in complaints about services for the city to focus on problematic areas within the city. Over time, this system curbed crime and gave residents the ability to voice their concerns within South Bend.

“The areas where we had the worst service were the areas we often had the least complaints,” Buttigieg said. “Because what had happened there is the residents had given up. So there was a kind of justice that became available through better use of data.”

“Sometimes the efficient thing to do is not always the right thing to do,” Buttigieg said.

Buttigieg also spoke about his experiences while he was deployed in Afghanistan, and how that opened his eyes to the issue of class in America.

“I visited Iowa and couldn’t believe how many young men I met were on their way to Iraq or Afghanistan,” he said. “While I could count on one hand how many in my Harvard class went into the military.”

Referring to figures of power, such as George H.W. Bush, who also served in the military, Buttigieg spoke about how they could relate to their fellow Americans who also served.

“This is actually really important for American social cohesion,” he said. “The military was where scions of these powerful families would wind up on more or less equal terms, socially, with farmer’s kids from Ohio. And I think it helped them become more in tune with the rest of America.”

His sexual orientation was also discussed during the interview with Allen, as many see him as a model for LGBTQ political figures.

When asked during the Q and A why he came out, Buttigieg said, “When you’re not out, you have to be two people. And in politics, you also have to be more than one person. But you only get to be one person when you die.”

He now looks to the possibility of a presidential campaign in the future and has been gaining support among some Democrats.

However, many have expressed hesitance regarding his lack of experience in the federal government.

“We are living in a moment that’s calling for newcomers and underdogs,” he said to that point. “Are we certain that spending many years in the U.S. Congress is better than a background in city work?”

The audience also had questions about his policies, especially when it came to bridging divides between different ideologies.

When asked about his strategy for overcoming divisive politics and bringing people together, Buttigieg said, “We are better acting towards people than we are towards abstract groups. By putting a personal face to the group, you can relate to them.”

Laura Cheney, a freshman at George Washington University who attended the event, said she found his platform exciting.

“His focus on the future, and ‘intergenerational justice’ is not something that a lot of candidates are talking about,” Cheney said.

The topic of intergenerational justice is one Buttigieg is pushing to be a central part of his platform. As someone who could be the first millennial president, he is very focused on the effects of older generations’ actions on those who are currently growing up.

In a January interview with NPR, Buttigieg said, “We have got to change the trajectory that we’re on so that mine is not the first generation to be worse off economically than my parents’ was.”

Cheney is also hopeful when it comes to Buttigieg’s chances in the upcoming presidential race, even though he is still only the exploratory committee stage.

“He’s obviously a bit of a long shot, but I think if he gets more name recognition, there could be the potential for him to have a real chance,” Cheney said.