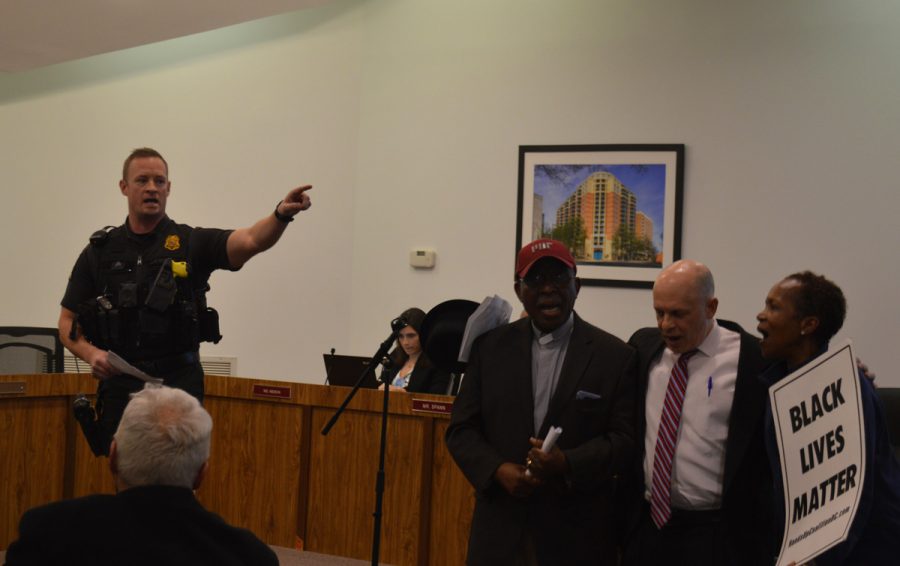 The protests were organized by members of the Macedonia Baptist Church to fight for the memorialization of Moses Cemetery, a historically black cemetery located on River Road.

Protesters are calling an end to the “desecration” of the site, which was paved over and made into a parking lot in the early 20th century and is potentially a spot for development of an affordable housing project lead by the HOC.

Pastor Segun Adebayo of Macedonia Baptist Church, Mayor Jeffrey Slavin of Somerset, and Lucy Perez were removed from the town hall and arrested by Montgomery County police after receiving two warnings to leave the building.

“The Commission asserted that it is not and has never been HOC’s objective to have people removed from Commission meetings in response to protests,” the statement read. “However, as protesters continued to disrupt the meeting, HOC requested they be removed from the room by County Police after completion of the community forum and in order to conduct agency business.”

Pastor Adebayo explained that protests over the use of the land have been going on for nearly two years, and added that “HOC is a major obstacle” to the Macedonia Baptist Church’s efforts to create a memorial at the Moses Cemetery.

“No one is coming here to be arrested, but sometimes we engage in civil disobedience,” said Adebayo. Last month, Bethesda Beat reported that four protesters were charged with disorderly conduct at the HOC’s January community forum.

Protesters arrived at this month’s town hall at 4 p.m., carrying knitted tombstones bearing the names of some of the people buried in Moses Cemetery. Several protesters sang songs and chanted ‘justice’ and ‘shame’ as members of HOC entered the room and took their seats.

At the start of the meeting, Commission members surprised protesters by announcing that HOC supports plans to create a memorial on the site of Moses Cemetery.

“HOC supports memorialization and we are hopeful that we can work collaboratively to move the dialogue forward,” said Commission Vice Chair Rick Nelson.

Marsha Coleman-Adebayo, the head of the Macedonia Baptist church’s social justice ministry,  stated in a press conference following the arrests that “this is the first time we have heard this message, and for us, it’s completely and totally unacceptable.”

People are still making decisions about our community with consulting the people who live in those communities,” Coleman-Adebayo said. “Next month we will continue this process until HOC decides that it is going to stop desecrating Moses African Cemetery.”

AU graduate students of in the Department of Public Anthropology are working alongside community organizations in Bethesda to document the history of African Americans living in the River Road community as part of their class, “The Craft of Anthropology.”

Delande Justinvil, a doctoral student in Public Anthropology and project coordinator for the class, explained that students in the class are working in collaboration with the Bethesda African Cemetery Coalition to update archives and highlight the African American community on River Road.

“Our involvement was to somehow give back to them,” said Justinvil. “We don’t just want to be taking things from the community to enhance our own studies, we want to make sure the studies that we’re doing and producing give back to the folks we’re collaborating with.”

AU Professor Adrienne Pine is the director of the graduate anthropology program and instructor of the class.

“All the communities we’ve been working with are facing various forms of displacement, gentrification, the desecration of their cemeteries, and our work as public anthropologists is to support them … Not just in recording their past, but support them in their fight to have the future they would like to have,” said Pine.

Public anthropology students are assisting in the creation of an exhibition of archival information about the River Road African American community that will be featured in the Katzen Museum at American University starting in June 2019.

“The main goal behind the exhibition is to push back against the narratives that other folks have been pushing upon these communities,” said Justinvil.

In addition to the updated archives, artifacts collected by students during their fieldwork as well as video and audio testimonies from interviews with community members and will be on display for visitors.

“These are vibrant communities that have done so much to create the foundations that built up Montgomery County, and even parts of Northwest D.C.,” Justinvil said.