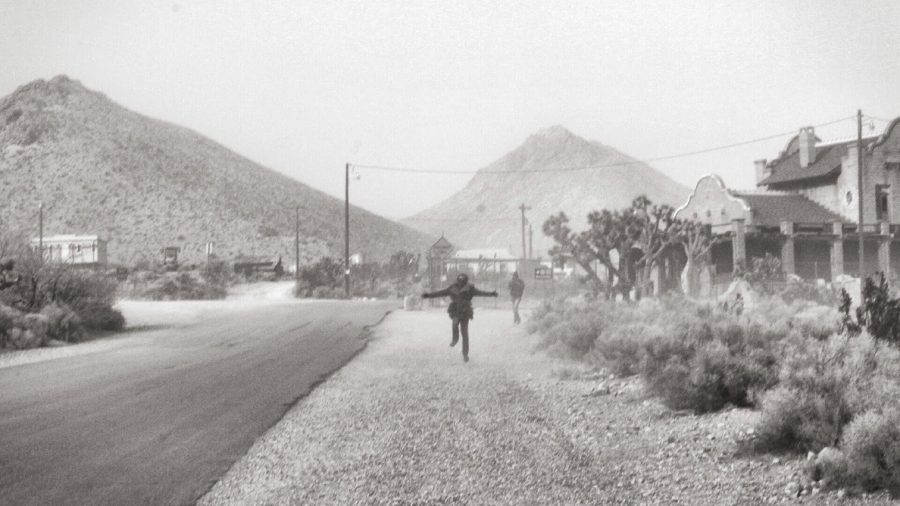 Every small town has a ghost. For many, this ghost manifests itself as an urban legend–a hook-handed man, an escaped mental patient, the local Boo Radley. But the ghost that haunts rural Clarksdale, Mississippi has a different name. Clarksdale’s ghost haunts a charred plot of land at the end of a driveway, circumvented by a backwoods highway, fifteen minutes from the nearest town, five from the nearest neighbor.

Highway 322 is sandwiched between sprawling bushels of cotton, Mississippi’s cash crop, occasionally alternating between paved asphalt and loosely adhered gravel. The highway extends its reach for miles upon miles of nondescript cropland– the passing cotton gins being the only indicator of the change of location.

Yet, on this indeterminate highway, tucked into the northwestern corner of Mississippi, lies a patch of permanently blackened, untilled land– an unmarked gravestone and scorched reminder of Quitman County’s heinous claim to notoriety. The now-empty lot stands in place of what was once the sight of rural Mississippi’s display of grandeur: a two-story country home, housing a happy family of four, coupled with a red Chevrolet Silverado pickup truck.

But rather than housing a lively household, the empty lot on Highway 322 lives in sinister infamy as the site of a gruesome quadruple homicide. And lingering at the back of that now empty lot sits a man named Anthony Carr– the Clarksdale ghost who’s been rotting on Mississippi’s death row for the past 28 years.

According to the Old Farmer’s Almanac, the winter of 1990 was an unequivocally hot one with the highs being in the upper sixties, the lows just grazing the fifties. On the night of February 2nd at around 9:15 pm, Carl Parker aged 58, his wife Bobbie Jo aged 46, and their two children Greggory, 12, and Charlotte, 9, piled into their car following a Friday night service at the Riverside Baptist Church and proceeded towards their rural Quitman County home just off Highway 322, according to caselaw.com.

Approximately three hours later at around 11:00 p.m. that night, while driving east on that same highway, Billy King arrived as sheets of rain pummeled his windshield. As his vehicle approached the now infamous driveway that dog legged into the Parker residence, King’s body became enveloped in heat. Suddenly the sixty-five-degree warm winter air seemed to pale in comparison, as Carl Parker’s stolen red Silverado pickup truck sped off into the highway’s abyssal frontier.

The fire burned for four and a half more hours, and while the bodies of Carl and the two children was retrieved by firemen within their first hour on the scene, Bobbie Jo’s body, that was found in the southwest wing, sat in the house for another three hours and, by the time it was recovered, was burned beyond all DNA recognition. To this day, the body that rests under Bobbie Jo Parker’s headstone is only assumed circumstantially to be hers.

Fifteen miles away awoke Clarksdale resident Eddie Lee Sprawls to the sound of a car door slamming– the door of a red Silverado pickup truck. Situated in between two abandoned houses sat Carl Parker’s stolen vehicle; its bed filled will furniture, appliances, and valuables, its driver’s and passenger’s seats filled with two unidentified black men. And just as Sprawls wiped the sleep from his eyes and dialed 9-1-1, the two men, who would later be identified as Anthony Carr and his accomplice Richard Simon, fled into the night towards Highway 61, not to be seen until morning.

According to local legend, the killings had been the product of a robbery gone wrong– that the Parkers had become victim to one of the most grisly homicides in Southern history simply because they were home.

The prosecution had a different idea. In their eleven day dissection of the case, DA Laurence Mellen detailed Carr and Simon’s premeditated intent to kill the family of four, sexually abuse nine-year-old Charlotte, and torch their residence in addition to burglarizing the home. The family had all been shot by both a .32 Winchester rifle and .38 revolver, and Mellen placed Carr’s hand behind the triggers. The prosecution had a clear case– a well respected, church-going family of four murdered in their home by two, African American vagrants from West Memphis. However, looming over the prosecutions impending success was their first misstep in the form of a testimony by a man named Anthony Washington, Carr’s cellmate.

Washington came as a last-minute witness enlisted by the prosecution claiming that, while awaiting his trial, Carr, after being administered a blood test, asked, “if they could tell if [I] raped that little girl?”

According to the “Statement of Facts” excerpt from Carr’s trial, Washington, who had been reading up on the case for the past week, then asked him to elaborate, eliciting, “We had a ball” from Carr as he rose his fingers to his head, mimicking a gun. Washington’s statement was a hit, sufficing as a clear admission of guilt from the party on trial. The jury sentenced Carr to death in less than a day.

In the fourteenth century, a man named William of Ockham authored the phrase, “lex parsimoniae ” or the law of briefness — Occam’s Razor — stating that the simplest answer is often the right one.

In 2004, Anthony Carr filed for post-conviction relief through the Mississippi Supreme Court citing thirty explicit examples of how his case had been mishandled. In it, Carr’s legal team attached the transcript to a testimony of Anthony Washington’s stating that “All [he knew] when [he] testified for that capital murder case was that the State was going to work something out with [his] case.”

Washington goes on to state that while he didn’t know how much time he was going to get off in exchange for testifying against Carr, he had knowingly testified with the intent of getting a reward.

A 2017 report conducted by The University of Michigan’s Law School, in tandem with the National Registry of Exonerations, stated that, in death row cases involving African American defendants, state-induced perjury was the third most common reason for false convictions.

Washington, having never received his shortened sentence, has since retracted his statements– the only concrete piece of evidence placing Carr as anything other than Simon’s co-conspirator.

However, the leading cause of false death row convictions falls under the umbrella of what’s referred to as a “Brady Violation,” or the obstruction of evidence that could potentially sway a case in either direction.

It’s a concept that, due to the vagueness of what actually qualifies as being able to “sway a case”, has been subject to great controversy depending on the way in which it’s ruled– whether it be for convicting innocent parties or setting free rightful criminals. In the case of Carr and his 2004 post-conviction relief request, he claimed that the state had knowingly excluded testimonies that would have potentially swayed the length of his sentence. In it, he cites a completely blacked-out statement from Robert Simon given on the morning of February 5th in which Simon implies that he had been paid off by a third party to kill the Parkers.

Simon stated that “[Redacted] told [him] that he needed a job done and drew [him] a diagram of the Parker house․ [He] asked them why he wanted them killed, and they told [him], said ‘It was none of [his] business.’ ”

Simon went on further to state that he would be paid off a considerable amount of money for his services. In a sworn affidavit from 2001, the Mississippi Highway Patrol Criminal Investigation Unit stated that the defense, at no point during the trial, even knew this statement existed– that it had been practically buried by the prosecution.

Because of the wide berth of potential ground covered by claiming a Brady violation, a four-pronged vetting process was implemented, raising the question of if the evidence had been disclosed to the defence, “would it have created a reasonable probability that the outcome of the proceedings would have been different?”

In other words, the court was ruling on whether or not the burying of crucial evidence even mattered. But on that same day in 2004, the state of Mississippi ruled that, even if Carr’s original defense had had the redacted and buried information, the outcome of his case would have remained unwavering, denying Carr’s relief on all counts– solidifying his place in line for the death penalty.

What is it about the outcome of this case that is so profoundly unsettling? The answer comes in the form of two numbers: 63 and zero. 63 — Anthony Carr’s I.Q. score, a number falling well within the range of the I.Q. diagnostic criteria for the mentally disabled, according to the Pediatrics in Review.

Both Carr and his cohort scored within the bracket of medically mentally handicapped, Carr reportedly barely touching literacy — another fact basically discredited and thrown away during their trials.

Zero — the number of black jurors assigned to Carr and Simon, despite the fact that according to the U.S. Census Bureau census, Quitman County’s population was 70% African American. I

In spite of the landmark Supreme Court Case Batson v. Kentucky, credited with ending racially-motivated jury nullification, dismissing a jury member on the basis of race is still remarkably easy and goes largely unpunished, the New Yorker reported that this made Batson look spineless shell of a Supreme Court precedent.

In a 1996 Court of Appeals, Illinois Judge James Flannery referred to the Batson process as a “charade,” going as far as to list the unjust dismissals of potential black jurors that he has had to deem as “race-neutral” during his term as a judge.

Whether you care to adhere to the train of thought that race played a critical role in Carr and Simon’s convictions or not, it is impossible to ignore the overarching problem– that Anthony Carr and Robert Simon existed within a system that was statistically stacked against them. All-white juries have an 81% chance of convicting a person of color, yet when just one person of color is added to a jury, this number disparity is practically decimated as reported by The Quarterly Journal of Economics.

What’s wrong is that there is no simple answer — no resolve to this mystery is palatable. Either one must accept that two twenty-year-old men committed a gruesome quadruple homicide in cold blood just for the mere convenience of it, forever shattering the naivety of small-town existence or one must accept that two mentally handicapped black men, tried by an all-white jury sit as placeholders, aimlessly awaiting release through unjust lethal injection.

It all trickles down to our human instinct to crave simplicity. Occam not only highlighted our tendency to take the path of least resistance but to believe it as well. On a neurological level, our minds have a needlessly difficult time coping with the inability to answer questions and it’s this chemical imbalance that makes us so fascinated with the unsolved.

But it’s this same instinct that makes this case so frustrating, for there is no path of least resistance. Every possible outcome forces its believer to accept that there will never be an incomplex resolve — that the simple question of what happened to four people for two hours on a single night in 1990 evokes the most convoluted, multi-pronged reverberations of vastly differing, contradictory accounts, all swearing to their utmost accuracy.

It’s for this reason that Carr, stuck in the eternal limbo between guilt and innocence, will forever haunt Highway 322 in tandem with the Parkers, immortalized in the penmanship of local reporters and that charred monolith — the abandoned Parker acreage, since relinquished to the deterioration of time and the stranglehold of kudzu.

For while the physical manifestations of that fateful February night become ephemeral under nature’s inevitable withering, the Ghost of Clarksdale, Mississippi remains untouched, preserved by the Delta air that flows through the gates of Mississippi’s Parchman Penitentiary, scuffing the shoes of its spectral death row inmate — stationed 30 miles south of Emmett Till’s grave.