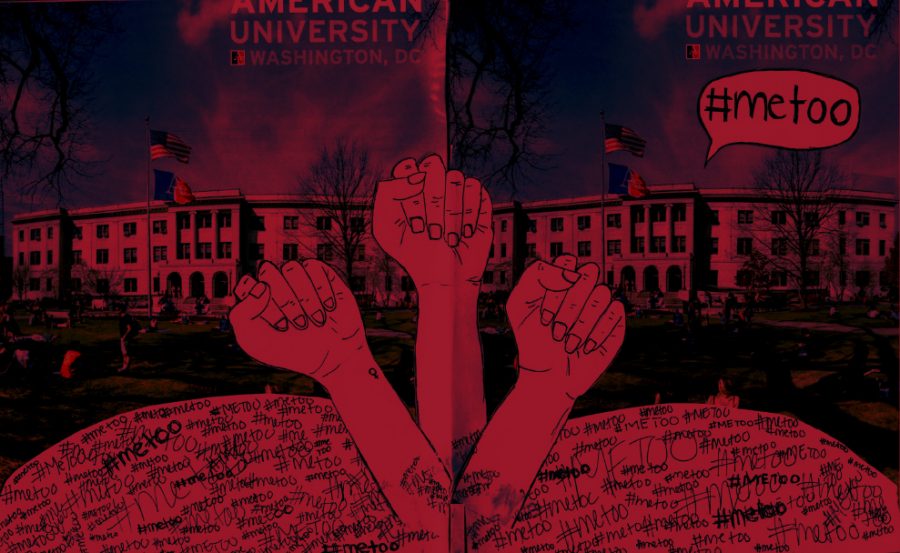 With sexual assault being a current and national issue due to the presence of the #MeToo movement, college campuses struggle to determine the best way to combat these situations.

American University was subject to an investigation by the U.S. Department of Education for failing to deal with a sexual misconduct case in an immediate manner in 2016. Just a year earlier, AU had been under investigation for their inadequate actions in responding to a sexual assault report from April 2015. According to the Washington Post, this brought the number of universities being investigated under Title IX by the DOE up to 104.

Title IX was emphasized during Obama’s presidency, as his administration held a strong importance for civil rights, increasing the number of reported sexual assault cases within college communities. As stated in the FBI’s annual crime report this September, there was a 20 percent increase in reports of sexual assault since 2013. American University has been continuously finding ways to take greater responsibility and action on these cases.

Traci Callandrillo, Assistant Vice President of Campus Life at American University, participates as a faculty mentor in the Sexual Assault Working Group. This is a group specifically made to understand where the university needs to improve regarding sexual assault and violence, and how they must continue to follow Title IX guidelines.

The SAWG is unique to AU, having an outlet to discuss sexual assault issues was a stepping stone for the programs implemented later on.

“It’s been in existence for 11 years, so when SAWG came into existence we didn’t have OASIS, the Health Promotion and Advocacy Center, or advocates on campus. So structurally, a lot of things have changed,” Callandrillo said.

These complex situations give universities extra difficulties when it comes to understanding and deciding the best ways to tackling reported assault cases.

“There were some hard years in there, from students letting us know that we weren’t getting it right or that we were only getting some things right but not other things,” said Callandrillo.

Callandrillo said she is attempting to listen and respond, as well as thinking about the best way the institution can take care of its students and take responsible stances on sexual misconduct.

One of the most difficult hurdles for universities in addressing sexual misconduct lies in the partying aspect on college campuses. A large majority of sexual misconduct or sexual violence situations take place in an environment where young adults participate in alcohol or drug consumption.

According to the Substance Abuse and Mental Health Services Administration, over one-third of full-time college students ages 18 to 22 participated in binge drinking in the past month, and about 1 in 5 used have used a drug in the past month.

In November 2017, the #MeToo movement caught the attention of many across the nation, allowing survivors of sexual assault to share their stories and stand up to those have brought trauma and harm to them.

The #MeToo movement has brought even greater awareness towards sexual assault claims and rape cases, including how they should be handled.

Organizations such as “Time’s Up” were created after the movement in order to raise money towards lawyers, legal funds, and organizations for women. They also work to educate individuals on how to deal with sexual harassment cases.

According to University of Arizona professor Mary Koss, 7.7 percent of male students admitted they had engaged or attempted forced sex, and most didn’t realize it to be a crime. Furthermore, 63.3 percent of men who admitted to such actions also admitted to committing multiple acts of rape. RAINN concluded that within undergraduates, 23.1 percent of females and 5.4 percent of males experience rape. These are just a few of the statistics that reveal the magnitude of this issue.

There is no concrete statistical evidence that the #MeToo movement has aided the fight against sexual misconduct on college campuses, but it has raised awareness of the issue. While more people are sharing their stories, there is no data that suggests the number of sexual assaults is decreasing.

“We did have an uptake in reports of sexual assault last year because of the #MeToo movement, but it’s hard to measure what is making a difference. The discourse that we’re having is bringing it much more into awareness,” said Callandrillo.

Between the 2013-2014 and 2016-2017 academic years, the number of sexual assault cases at Harvard rose by 65 percent. This shows a direct correlation to before and after the presence of the #MeToo movement.

The #MeToo movement has given many sexual assault victims a voice, with CBS News finding that 1.7 million tweets across 85 countries used the hashtag in order to make their voices heard.

“My concern is that we are still in a period of deconstruction,” Callandrillo said, “In the next few years, I think we will continue to see a fair amount backlash. However, with each piece of backlash, I think there will come a point where people will have had enough.”

On the other end of the issue, the Trump Administration is pushing to place new policies relating to sexual misconduct on campus, led by Education Secretary Betsy DeVos. A draft of the new policies proposed by Devos reveals that universities could be held responsible for fewer incidents and not be required to investigate if they are not directly given to an official or if the situations had taken place off campus grounds.

Amber Athey is a journalist for the Daily Caller with a conservative-leaning and a strong stance on the #MeToo movement. On Oct. 23, American University’s Young Americans for Liberty hosted an event originally titled “No, Don’t Believe All Women,” the title of Athey’s speech on a response to the movement.

After receiving backlash, the event title was changed to “Your Due Process #MeToo,” stating that it would better reflect the contents of the speech.

“I want to be clear that the title of my speech is ‘No, Don’t Believe All Women’, and I don’t care if that upsets you. This speech was in fact intended to upset people. In this current era of hyper-political correctness, I want to challenge the idea that college is a place where you are supposed to be comfortable,” Athey said at the beginning of her speech.

Her speech discussed why it is not fair to believe all accusers of sexual assault, saying that all women should be heard, but not necessarily believed.

The presence of this event sparked controversy, prompting AU students to stand outside the event and protest. Holding signs saying ‘Believe All Women’ and ‘Me Too’, they proceeded to chant and walk around the inside of Mary Graydon Center where the event was taking place.

“Nowhere is the #BelieveAllWomen lie more widespread than on college campuses, which have perhaps the worst track record when it comes to properly adjudicating sexual assault claims,” Athey said.

College campuses have a striking amount of difficulties when it comes to dealing with these issues, and on a campus as politically active as AU, these conversations remain complicated.

“I’d like to see our conversations get a little more complicated and nuanced while engaging in conversations within the community,” Callandrillo said, believing that the first step to tackling this issue is by confronting it externally. This is an idea that has just recently begun nationwide because of the #MeToo movement.

“We are talking about issues that are much larger than this institution, but it is our responsibility to respond and figure out how we approach these issues,” Callandrillo said.
When approaching these issues, events such as these occurring on campus have caused students to believe that these issues are being denounced by the institution as a whole, as seen with the protestors chanting during Athey’s speech.

While some see the presence of speakers such as Athey to be harmful to AU’s environment, it is difficult to determine whether or not we can hinder free speech in this case. With an issue as complicated as sexual misconduct, tackling it as a college community raises many difficulties and questions.

“It can be hard to make clear connections to what’s working because there is no amount of assaults that’s acceptable, that’s zero. We’re not there,” Callandrillo said.

The future of combating sexual assault on AU’s campus has no definitive answer as of now, but faculty and community members work towards ensuring the safety and support of students.

“I don’t have control over humans and their behaviors, but I do have control over our resources and how we use them to support people who’ve experienced an assault. It is important to show that we put this issue front and center and that it matters to us,” Callandrillo said.