Inclusion Delusion: Students of color struggle with tokenism at AU 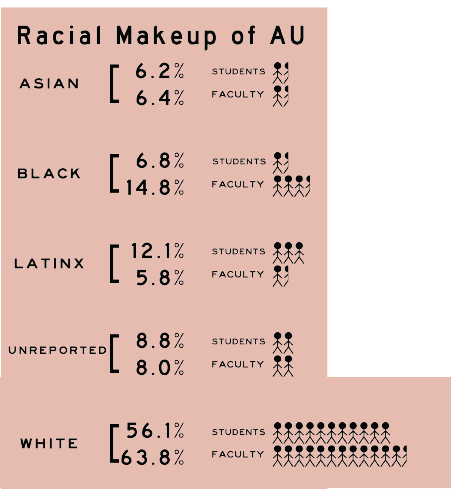 Sarah, whose name has been changed to protect her identity, was sitting in her 8 a.m. criminal justice reform class waiting for the clock to hit 9:25. As the minute hand inched towards the five, she and another black classmate were suddenly called on by their professor, who requested their opinions on mass incarceration.

“Being called out in a class filled with white students was not the best feeling,” Sarah said. “Even if he didn’t mean for us to represent our race, it still feels like that.”

This case was reported to the Center for Diversity and Inclusion, a campus resource committed to respecting and valuing diversity on campus, according to their website. But, the investigation has since been closed. Although the CDI is an important part American University’s diversity and inclusion efforts, there is still noticeable tokenism of students of color.

The False and Incorrect Diversity of AU

Lucky Sasiphong, a junior at AU and vice president of the Asian American Student Union, said their experience is similar to Sarah.

“I am one of maybe two or three people of color in a classroom,” Sasiphong said. “I am usually the only Asian person in a classroom and that often leads me to feel tokenized.”

Tokenism, according to the Cambridge English Dictionary, is “actions that are the result of pretending to give advantage to those groups in society who are often treated unfairly, in order to give the appearance of fairness.”

Sasipong explained how problematic this is, because she recognizes that she does not speak for all Asian-Americans due to their diverse experiences.

“It’s hard because we don’t represent every API [Asian Pacific Islander] person on this campus,” Sasiphong said about the AASU. “It’s been really difficult when like we feel like we have to speak for everybody on this campus.”

AU has been slowly increasing the diversity of their student body. Today, 43.9 percent are now are students of color, which includes white-passing Latinx individuals and white-passing visa holders.

The official statistics on AU’s demographics cannot be found on AU’s website, but according to College Factual, Latinx students are now 12.1 percent at AU, followed by black students at 6.8 percent, and Asian students at 6.2 percent. The remaining 8.8 percent did not report their race or ethnicity.

AU faculty is less diverse than the student population, as only 34% identified as an ethnicity other than white. The largest minority faculty group identified as black, which is 14.8 percent; significantly greater than the black student population. The second largest group is Asian as 6.4 percent, followed by Latinx at 5.8 percent. The remaining 7 percent did not report their ethnicity.

At AU, faculty members are teaching more than basic academic subjects like science and math; they’re discussing subjects like mass incarceration, police militarization and global inequality. Professors are then faced with the challenge of teaching these topics to students of color on a predominantly white campus. This is the case for Professor Alexander Clayton, who teaches Introduction to Systems of Justice.

However, Professor Clayton does believe his method has flaws.

“When I call on students in class like ‘tell me your experience’, that is tokenism to a certain extent,” Clayton said. “And I don’t have a good answer to whether I should be doing that or not. I question myself sometimes.”

Clayton’s approach is based primarily in his hope to increase participation from students of color in class.

The goal of most professors, especially at an institution like AU, is to teach in a way that is less abstract and more tangible. Professor Clayton is one of many professors who believes actively calling on students of color makes the learning material easier to grasp. He emphasized the importance of hearing real life experiences, instead of reading from a textbook when it comes to these experiences for “more conventional students.”

“There is a level of consciousness as a black male teaching mostly white students,” Ofori said.
Due to this, Ofori is sensitive to perceptions of race, stating that he doesn’t want to just critique, and would prefer to focus on teaching without threatening students. Ofori suggests making issues about race tangible for white students, to begin with “something [common] as a tool….[and] analyze that.”

“This method disarms students and disarms defensiveness,” Ofori said about this, based off of his experience at Georgetown University. Professor Ofori believes his method allows white students to engage in conversations about race and inequality without feeling the need to defend themselves.

“I can then acknowledge race and ethnicity as complementary to these issues…. White students can still speak on these topics about race and inequality,” Ofori said.

STEP: The Golden Students of AU’s Diversity and Inclusion Initiative

One little-known program organized by the CDI is the Summer Transition Enrichment Program, commonly known as STEP. Admissions handpicks around 100 students whom they believe need extra support transitioning into college and gives them a choice: attend STEP for eight weeks in the summer, or forfeit your acceptance.

“[Admissions] selects students for STEP who have demonstrated excellence throughout their application but may have attended an under resourced high school,” Andrea Felder, Provost for Undergraduate Admissions, said. “They may be first in their family to attend college, they may come from a rural/urban community, or have otherwise shown they could use the additional support before beginning their academic career at AU,” Felder said.

While the selection process is undisclosed to both the participants and the CDI, there are commonalities among participants. According to Office of Enrollment, the 2018 STEP class was 55 percent black, 30 percent Latinx, 6 percent Asian, 6 percent multiracial, and 3 percent international students. There was a total of 33 students enrolled in STEP this year.

“It made me feel bad about myself,” Jacqueline Martinez, a current freshman at AU and participant in the 2018 STEP program, said. “I don’t know if it was the way it was phrased, but it just made it seem like I needed additional help or they wouldn’t want me at all. It was kinda like a test.”

To this day, Martinez and other participants still are not sure why they were chosen and were never given an explanation by the school.

“It was a rude awakening of what was to come in the fall,” Martinez said, referring to her experience at Eagle Summit. “When I told people I was in STEP, I got a lot of mixed reactions. Maybe they were jealous, but I’ve heard some things like it’s for the colored students, for the poor students, it’s for the dumb [students].”

“I do feel like STEP lowkey tokenized their students because when someone asks why they were chosen, they shy away from the answer,” Shahad Mohieldin, another 2018 STEP participant, said. “But they say that if we gave you all the resources AU has, you’ll become the best students. If I go off to do great things in the world, I feel like I have to credit STEP.”

AU diversity rates among the student population are rising. Sasiphong discussed her excitement about the growing Asian-American Pacific Islander population at AU.

“When I was a freshman, AAPIs were only 3 or 4 percent of the student population,” Sasiphong said. “Now it’s 7 percent. That’s amazing!”

Sarah also commends AU, stating that she does notice the effort, especially with the CDI.

“CDI does a lot and they’re great to educate and to make communities,” Sarah said about the programs that CDI offers, including their intergroup dialogues and workshops.

However, predominantly white institutions like AU, even with resources like the CDI and STEP, struggle with supporting students of color without them feeling segregated or tokenized.

“Although [my professor] felt like they were giving us a platform to speak, we have hands that we can raise,” Sarah said.