Where Are All The Women?

A Look Inside the Audio Industry’s Gender Disparity 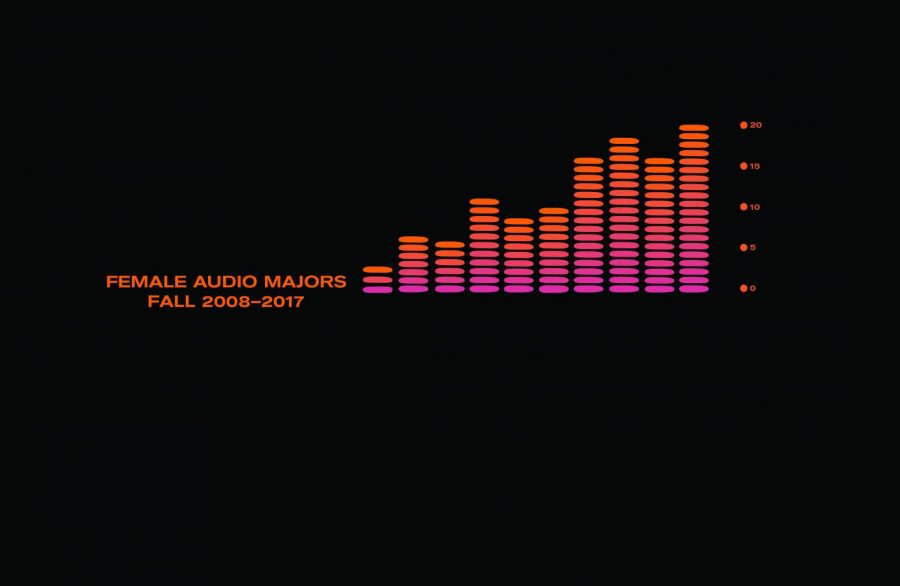 When Ana Centina walks into a freelancing job as a sound engineer, she is greeted with stares by colleagues who were expecting a man to do the job, rather than a woman.

Centina works as the director for American University’s audio technology program and as a freelance live sound technician. Like other women in the audio industry, Centina is a rarity and said she is treated differently than her male coworkers.

“Being a female in a male-dominated industry is really tough,” Centina said. “When I would work at small venues, the owners would have no confidence in my work so they would hover all over me, constantly looking over my shoulder to make sure I could do it correctly. I think it was subconscious, but they never did that to the male technicians.”

Less than five percent of women were working in the audio industry back in 2000, estimated the Audio Engineering Society (AES), a professional association for those involved in the audio.

According to the Women’s Audio Mission (WAM), a nonprofit located in San Francisco that teaches women how to have audio careers, that statistics has stayed the same for the past 17 years.

“The biggest challenge is that women, in general, are socialized to be afraid of tech jobs and are told it’s something only men do,” said Angel Dunkin, a WAM employee. “Trying to get women to jump in and learn it and master it is half the battle. They can do it, they just need to believe they can first.”

One of the ways WAM tries to get more women involved in the industry is by hosting music production classes specifically for young girls during their formative years. However, WAM also provides classes for adult women who are looking to break into the industry.

Though WAM receives more young women students every year, some professors in the program see two to three women in a class of 20 men, Dunkin said.

This trend is happening at universities across the country.

“Audio is a very heavily apprenticeships based industry and I think a lot of power comes from that, but now that there are all of these universities popping up where they’re training you in a professional way how to do audio, so you don’t actually have to put up with these annoying people anymore,” said Alexandria Wood, a full-time live sound freelancer and tour manager in New York City.

However, many of these types of audio education programs are relatively new.

While Centina was looking at schools over a decade ago, there were only three or four colleges with audio technology majors, which often required her to be a full-time musician as well. Now, these majors are popping up in schools across the country.

“Girls don’t always know about engineering unless they have a cousin or a brother who goes to the studio. That’s just the thing,” said Alexis Sullivan, a live sound technician in D.C. “Nobody was going to teach me in the real world. I personally know that, I’ve learned that and… I had to teach myself, so I went to school.”

Due to this, the disparity in the classroom is decreasing, according to Centina.

Over the last ten years at AU, the number of women enrolled in an undergraduate audio program increased four hundred percent from four to 20 women.

“When I was an undergrad at AU, I was the only female in my year for a long time. I convinced my friend to join and we were the only two girls out of 35 students,” Centina said. “We have more females in the program now than we did students in general back in my day. It’s a great improvement, but there’s still a long way to go.”

Though the education sector is improving, it may not necessarily reflect the large-scale disparity within the industry.

In its 40-year history, only six women have received nominations for the GRAMMY’s Producer of the Year award. Though musical icons such as Mariah Carey, Janet Jackson and Sheryl Crow were all nominees, no woman has yet to take the award home.

Wood believes that women face these issues and cannot get ahead due to the industry being so heavily freelance-based and “sexist in nature.”

“It’s a weird industry because to me, as a freelancer, I don’t have an HR Department,” Wood said. “So if somebody treats me badly, I either just have to deal with it or quit. And I have to be okay with that. It’s really frustrating and you also miss out on a lot of opportunities.”

Live sound technicians spend their nights in music venues where people are drinking and partying. This has lead to a handful of tough situations, Wood said explaining her work environment.

“The lines are more blurred because you’re in this environment of people drinking and going out,” Wood said.“Sometimes coworkers have talked to me very casually about their sex lives in a way that I later found out they didn’t speak to other peers. It’s hard to determine whether it was just because I work in a more of a casual environment or if it was because I’m a girl and they’re trying to sleep with me.”

Centina experienced inappropriate behavior from her peers as well and believes that, along with discouragement, it is what leads to a lack of women in audio careers outside of college.

“The industry doesn’t necessarily reflect university program enrollment for a number of reasons,” Centina said. “When you’re young, you’re more vulnerable and it’s easy to get discouraged. Even if you get good grades and know what you’re doing, it’s easy for girls to switch industries and give up because their male bosses yelled at them and they have no female colleagues to turn to or look up to.” 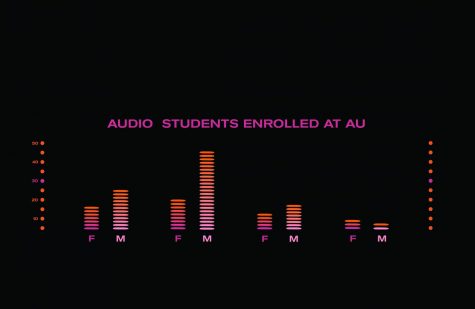 Organizations such as ProjectHERA, a nonprofit to benefit girls in the music industry in the DMV area, seek to end this issue by creating a support group for women in the industry.

“We provide an outlet for women to connect,” said Cathy DiToro, the founder of the nonprofit. “We try to host events once a month where we can all get together and see we’re not alone, spread awareness and support each other during the rough patches. It’s pretty powerful to have that connection with other women who have gone through what you’re going through.”

ProjectHERA also has a Facebook page, named ProjectHERA’s Music Room, where its members can share articles and resources as well as seek advice from more experienced women. This type of mentorship is something Lauren Migaki, an audio journalist at NPR, believes will help women in the audio industry in the future.

“It’s hard to find a female mentor, but it’s so important,” said Migaki. “I think women feel like they’re undeserving or unqualified of mentorship, but they are deserving. Everyone, especially women, needs someone to look up to and feel comfortable talking to about their career with in order to grow.”

One way everybody can help lessen the disparity is by encouraging and speaking up for women in the workplace, said Migaki.

“It is so important, for men and women, to amplify other women’s voices at meetings,” Migaki said. “There’s this trend for young women to be railroaded or interrupted or ignored and we need to do a better job of letting those voices be amplified and supporting those voices rather than shutting them down.”

Though the audio industry has come a long way, Centina still thinks there is a long way to go.

Sullivan, thinking towards the future and reflecting on her time in the industry has advice for girls looking to follow in her footsteps.

“We gotta put ourselves out there, you cannot be afraid of a no or getting your neck chopped off. You have to push as much as possible and set that standard for yourself and women to follow in your footsteps,” Sullivan said. “Stay hungry for it, hungrier than the boys.”