Criticized for social media posts and confusing past

The campaign of Junior Jarryd Delaney, an AUSG Presidential Candidate, is facing criticism this week after social media posts from 2015 and 2016 surfaced in which Delaney supports conservative viewpoints.

“I haven’t been completely open with you,” Delaney said. “Recently things from my past, before I came to AU, have been brought up and instead of owning up to it and conquering it, I denied it.”

The “things” that Delaney is referring to are tweets written by him in the Fall of 2015 that support conservative points of views. 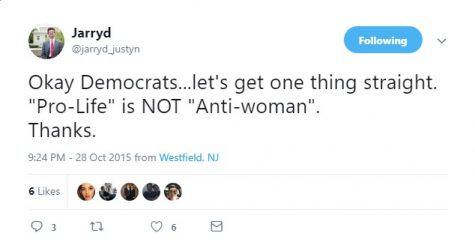 “Okay, Democrats…let’s get one thing straight. Pro-Life is not Anti-woman. Thanks,” Delaney tweeted in October of 2015.

Delaney also tweeted about his stance on immigration. 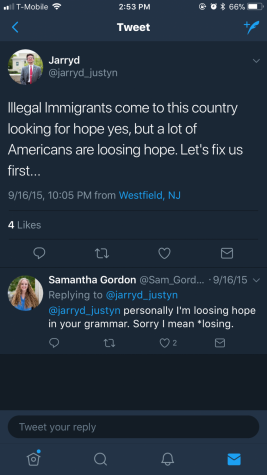 “Illegal Immigrants come to this country looking for hope, yes, but a lot of Americans are losing hope. Let’s fix us first…”, Delaney tweeted in September of 2015.

Students have found these comments troubling considering Delaney has branded himself as a progressive throughout his campaign. Other than his campaign videos, Delaney promoted liberal ideas while he was a guest on Campus Progressive, an online web show hosted by former AUSG Senator, Yasaman Moinzadeh-Hakami.

Freshman Joyce DeCerce discovered Delaney’s conservative political activism after stumbling across twitter posts that showed Delaney’s twitter account retweeting a tweet that featured his photo published by Turning Point USA, a right-wing nonprofit organization whose mission is to promote free-market values, according to their website. The t

“I looked at his twitter and it was clear that he harbored these (conservative) points of views,” DeCerce said.

Delaney’s campaign manager, senior Andy Lalwani, said that Delaney held these beliefs because of the lack of education of those who surrounded Delaney at the time.

“We only have a limited capacity of what we are surrounded by and what gets put into our everyday lives,” Lalwani said. “So when (Delaney) was up in New Jersey there were certain factors that limited him from also granting opportunities to have further knowledge and gain understanding of other identities out there. I was taken back at it (social media posts), but I also was like, this isn’t the Jarryd I know.“

More recent tweets of Delaney’s include posts that support Marco Rubio and Paul Ryan, and a tweet in which Delaney said that Nancy Pelosi “pisses me off”, all of which were made in 2016.

Although Delaney admitted and apologized for these comments, students such as DeCerce are annoyed that Delaney did not at first admit that he was responsible for the posts.

DeCerce said that they do not have a problem with Delaney’s beliefs, but rather that Delaney tried to deny that he ever held these views.

“Even if he disowns what he believes, why would he pretend that he never said that,” DeCerce said. “ If he (Delaney) owned up to what he said in the first place I would be much more willing to believe him.”

The Delaney campaign responded by saying that their candidate did not admit that the social media posts were his at first because it’s hard for people to remember things they said three years ago.

“When he (Delaney) had concerns about those tweets he wanted to rip them down, and he did,” Lalwani said. “He was afraid that someone was going to come after him, and they did.”

Lalwani denied that Delaney was involved in Marco Rubio’s presidential campaign two years ago. A Facebook post made by Delaney in 2016 appears to show Delaney encouraging friends to help with Rubio’s campaign. 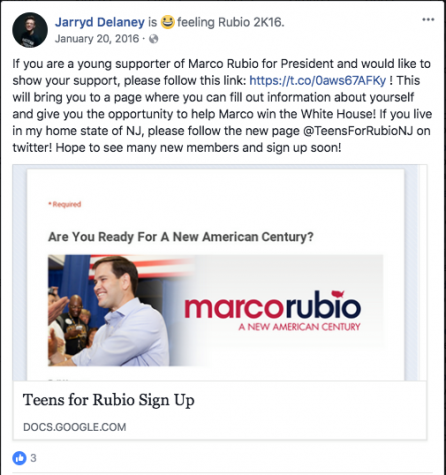 Another criticism facing Delaney’s campaign is his confusing background at AU. In his first campaign video posted to Facebook on March 21st, Delaney said he was a second-year transfer student.

“As a transfer student I never thought I would be in this position today”, Delaney said in the video.

In lieu of a traditional senior year at his high school, Delaney commuted and took all of his classes at Kean University, said Lalwani. Following the completion of the college level classes in what would have been his senior year, Delaney graduated from high school with 32 college credits in 2016; 26 were accepted by the University.

The Office of the Provost at AU initially accepted Delaney as an incoming high school senior, not as a transfer student, said Delaney. He was admitted into freshman housing and participated in the University College program.

Lalwani said that Delaney should be considered a transfer student because he acted as a commuter student at Kean.

Lalwani said that his experience at Kean shares similarities to other transfer student at AU. Delaney’s peers, however, disagree with this comparison.

“I feel like Jarryd saying he’s a transfer student really misrepresents the transfer experience,” junior Rachel Bassel said. “He still got to socialize in a normal way and went through welcome week along with all the other freshman. Transfer students don’t get that luxury, they’re just thrown into the AU environment and have to adapt quickly and seek out organizations, which Jarryd did not have to do,” Bassel said.

Delaney told AWOL that he did attend Welcome Week, a week-long event held for incoming freshman, but came towards the end of the week. He claims that the university denied him access to Explore DC, a freshman only part of Welcome Week.

Delaney has yet to publicly address criticisms about his transfer student experience but is expected to comment on these concerns at a televised debate on ATV Monday night. The debate starts at 8 p.m and will be followed by a town hall forum in The Tavern at 9 p.m.