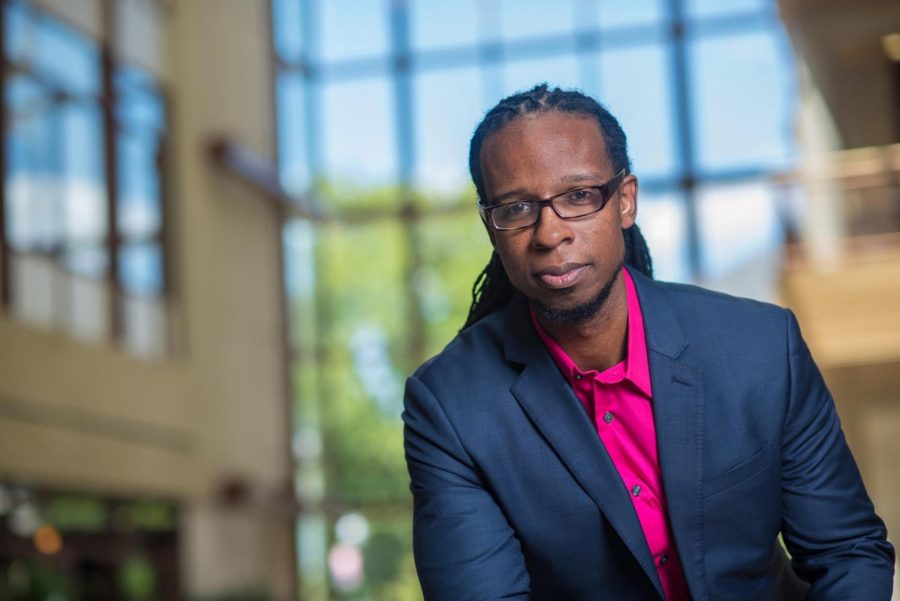 Ibram X. Kendi is a professor in the Department of History and School of International Service at American University. He also serves as the founding director of the new Antiracist Research and Policy Center. His second book, Stamped from the Beginning: The Definitive History of Racist Ideas in America, won the 2016 National Book Award for Nonfiction. In addition to being a New York Times best-selling author, his scholarship has earned him fellowships, research grants and visiting appointments from a variety of places including the Lyndon B. Johnson Library & Museum, University of Chicago, Wayne State University, Emory University, Duke University, Princeton University, UCLA, Washington University, Wake Forest University, and the historical societies of Kentucky and Southern California. AWOL sat down with him to discuss current-day activism, hate crimes, and anti-racism work with discriminatory policies.

You initially studied sports journalism in college. But now you’re an award-winning historian and author. What caused that shift?

I think it’s a number of different factors. I think, as I was writing on sports, I become increasingly interested in racial issues. I guess my first major story, as a sports intern, was something sort of at the intersection between race and sports. And so I entered into sports and then started drifting into racism or race in sports. Then eventually that led me to race or racism more broadly.

You wrote a book on college activism in the sixties and seventies called “The Black Campus Movement: Black Students and the Racial Reconstitution of Higher Education”. What is some advice you have for current day student activists?

First and foremost, to recognize the difference between a protest and a demonstration. Demonstrations are typically rallies and marches and other sort of public forms of activism that demonstrate to the world that there is a problem, or demonstrate to the world that there are some sort of wrongs that are being perpetrated. Power doesn’t necessarily respond to demonstrations, but power does respond to protests. Typically, protests in some ways compel power to make a change. So, I think, modern activists today have conflated demonstrations and protests. Some of them engage in demonstrations expecting them to lead to change, when historically protests are what have brought about change.

On the night that you unveiled your vision for the Antiracist and Research Policy Center, a hate crime occurred on campus. What were your thoughts on that, and what is your opinion on the student and faculty reaction to the incident?

I mean, I expected as much. In studying the history of racism, I know that one form of racism is racist violence or terrorism that typically pounces when some sort of progress is being made. And that is emblematic of the history. That happening that night certainly was not something I was thinking would happen, but when it did happen, it did not surprise me. At the same time, I knew and saw many students and even faculty that were deeply hurt and were even feeling scared about what happened and even their own safety. Of course I tried to speak to that, to reach them emotionally so that they could feel better and gather the courage and strength to move on and continue.

What brought you to American University in the first place?

I was attracted to a number of different things. I was attracted to the faculty’s commitment to engaging their research in policy questions and policy change. And that was apparent even in my first visit to AU, when I gave a talk on my book. I was attracted to the student body, which is renowned as one of the most politically active student bodies in the country – a student body that is itself very conscious and interested in social justice issues. And, of course, this institution is very ambitious, and I like being at places that are very ambitious and are really trying to go to the next level. The opportunity to build this Antiracist and Research Policy Center here at AU, with all of those circumstances that I described and being in Washington, D.C. – which is the policy capital of the world – made all the sense to me.

How did your Antiracist and Research Policy Center come about?

It came about primarily through speaking around the country. I would first and foremost speak regularly about the way we need to focus on bringing about racial change by changes in policy. What racist ideas cause us to do is to think that problem is people rather than policy. And so, in speaking about that in a nutshell in my talks, of course people would ask me how can they go about changing policies in their communities. They would ask me what am I doing to go about changing policy. And I think those confluences and steady flow of questions led me to realize it’s not enough to direct people to change in policy. It would be even more effective if I was to engage in that work myself and simultaneously model it for people around the country.

Your upcoming book is titled “How to Be an Anti-Racist: A Memoir of My Journey” hopes to answer some of those questions.  Are you hopeful that such an anti-racist society can be built? Why or why not?

You’re the youngest person to ever win the National Book Award for Nonfiction, which you won for your second book, “Stamped from the Beginning: The Definitive History of Racist Ideas in America.” Can you talk a little bit about the main idea of that book and what motivated you to write it?

Can you talk about your vision for the Antiracist and Research Policy Center? What purpose do you want to it serve in the AU community and in the country as a whole?

The vision is to bring together scholars, policy experts, journalists, and advocates into AU who would first and foremost investigate problems of racial inequity, the discriminatory policies behind those inequities, and create egalitarian policy correctives. They would then disseminate those policy correctives and research to campaigns of change that focus on getting those policies instituted. And so these groups of people – policy experts, journalists, advocates and scholars – would be organized in six teams and those six teams are education, economy, environment, justice, health and politics. And those teams would teach courses related to their contribution to the larger research projects, which would allow students to become part of of these national and international research projects. And so we’re hoping that through this center, AU would be put on the map as an important, intellectual space that is producing high quality, evidence-based research that is leading to policy change.

Paloma Losada is a junior studying international studies and economics.