A Real Game Changer: The Gamble on Social Impact Games 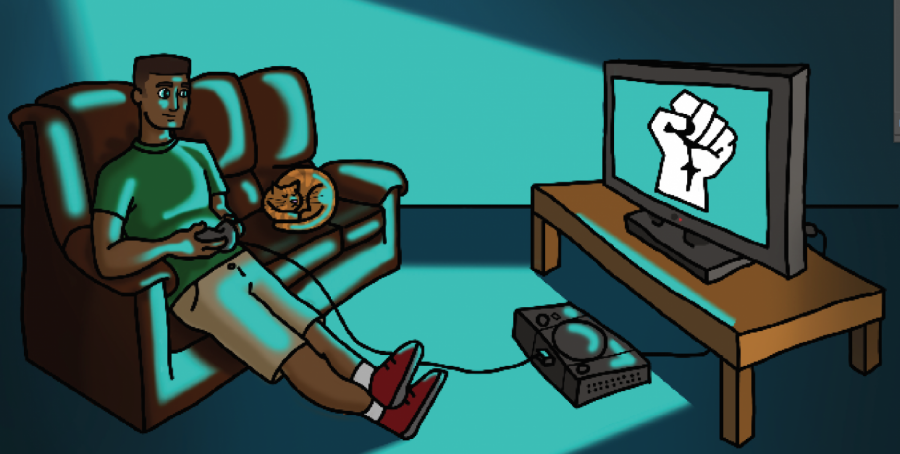 After returning home, your house is empty. Your family is gone. You move from room to room, piecing together what happened while you were away.

This is the premise of Gone Home, a social impact mystery game that explores topics like LGBTQ+ representation and domestic abuse.

Players of both popular action games and more story-driven titles contemplate decisions that will forever alter their in-game worlds. Other games, however, explore what could happen if we focused that time on examining the problems in the world around us. These are called social impact games.

According to the Entertainment Software Association’s 2016 industry report on gaming habits, 63 percent of U.S. households had at least one frequent gamer, making gaming a fertile ground to spread messages of social change.

Social impact games serve a bigger purpose than entertainment. They drive conversation and action. Rather than being virtual escapes from the real world, players confront problems people face every day, like environmental sustainability or the War on Drugs.

Lindsay Grace, the founder and director of the American University Game Lab and Studio, sees gaming as a unique platform for making positive change in the world. He’s made it the focus of his career as a video game designer and a key component of his program at AU.

“It’s not just about employing engagement strategies in games,” Grace said. “It’s actually about trying to make the world a better place through game design.”

A few projects, such as Gone Home, have received critical recognition. However, there are still barriers that block impactful games from becoming commercial successes and household names. Some of these barriers include smaller promotion budgets and limited developer resources, but the control of the gaming industry by big-name developers like Activision and EA makes it especially difficult for independent game designers to make it.

Grace knows the independent developer’s experience firsthand. His game designs like Wait––a unique piece that rewards the player for just standing still––have been honored as some of the best social impact games in the past decade by the Games for Change Festival Hall of Fame. However, he sees inherent differences between mainstream titles’ development and the development of more impactful games––differences that restrict the genre to its niche audiences.

“The social impact game space is always going to struggle the same way that a documentary is going to struggle,” Grace said. “When you’re comparing yourself to what we call triple-A games, that are the equivalent of a Hollywood film, the lure is different.”

Social impact games are growing more common because of the rise of small, independent teams with tight budgets, Grace said. Some of these games include Gone Home or Papers, Please (a game that provides dark but humorous commentary on dystopia and authoritarianism). These teams target very specific audiences very well and own those spaces.

Bri Williams, a student in the MA Game Design program at American University, believes that college programs devoting themselves to creating games for social impact could play a role in expanding the audience seeking those experiences.

“If more people are making social change games or any type of impactful games, they have the chance of getting to a wider audience, which makes people hopefully do more research on the subjects,” Williams said.

Williams, who primarily works on narrative designs and improving the functionality of artificial intelligence in video games, foresees a rise in the popularity of independent titles, especially with the increased pool of creative talent to draw from.

“Hopefully, that’ll also mean that AAA spaces will say, ‘Okay, there’s something going on, we need to see this through without being ignorant of the subject,” Williams continued.

Other industry players like Susanna Pollack, president of Games for Change, also see a future where these games with a bigger purpose begin to rise to the level of more popular, mainstream titles. One example is That Dragon, Cancer, which tells the story of a family dealing with the terminal cancer diagnosis of their young son. The game received recognition at the 2016 Game Awards and at the Games for Change Awards in the same year.

Pollack hopes for a rise in the popularity of games with a greater social mission, following the attention surrounding critical darlings like That Dragon, Cancer.

“There is more of an acceptance of smaller titles with different modes of experiences,” Pollack said. “[They] may not have the production values or the typical kind of gameplay that would attract the more commercial critical eye.”

Games For Change is facilitating this acceptance as much as possible, developing and running game design competitions that allow some of the best talent to surface.

Pollack says she is optimistic that independent studios will continue to receive attention and grow an audience.

Although independent studios are seeing more success, there is still the question of how the first mainstream social impact game could be backed by a major distributor like Sony or Microsoft.

This, Pollack says, is the “million dollar question.”

“Games that are now ubiquitous in our society have this fantastic opportunity to bring some of these strong messages and learning opportunities to society,” Pollack said.

Grace and Pollack say the greater accessibility of game design and more game design programs could help create the next big game for change.

“Where I think we have a big win,” Pollack said “[is that we] have an opportunity to inform these game developers that the work that they’re doing doesn’t have to fit solely in the entertainment space, that there are real societal benefits that can happen through game making.”