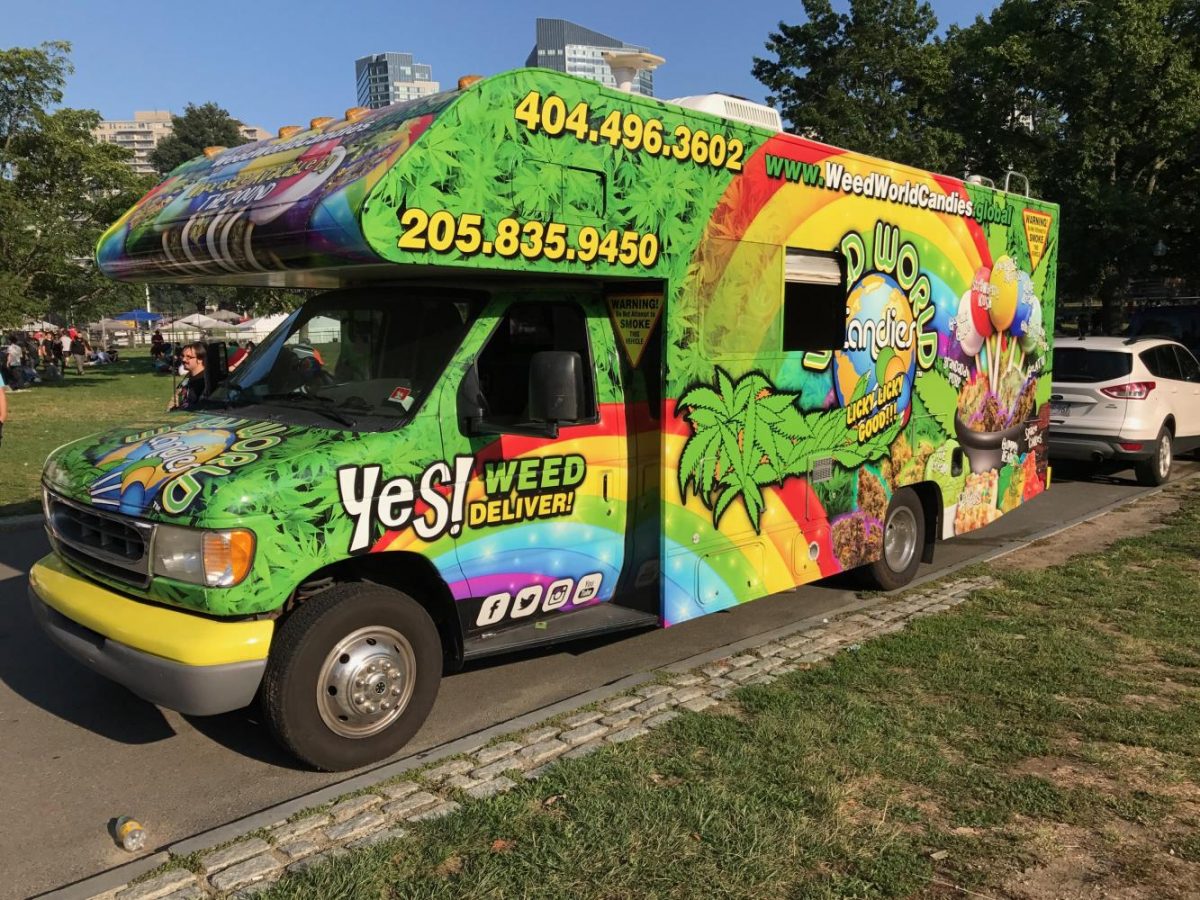 A food truck at the Boston Freedom Rally.

“Bong rips are $20, dabs are $10, and edibles are $10,” said a disheveled looking man with a long, white beard as the Grateful Dead plays on vinyl in the background.

This year marked the 28th annual Boston Freedom Rally, affectionately called “hempfest” by some, on Boston Common, a 50-acre park in the middle of the city. The Massachusetts Cannabis Reform Coalition, the organization that runs hempfest, says on its website that the festival is a “peaceful protest as goers practice civil disobedience consuming Cannabis in support of its freedom and blooming social acceptance.”

The first Hempfest was organized in 1989 in North Adams, a suburb of Boston, as the consumption of marijuana was becoming more socially acceptable, even as President Reagan’s war on drugs raged on. Today, the Boston hempfest, held annually on the third weekend of September, is the second largest festival of its kind, only behind Seattle.

When I asked the man, who asked to remain anonymous, if this was legal, his reply was humorous.

I said that I was a journalist looking for a story.

Although marijuana was legalized in Massachusetts for recreational use this past election, dispensaries are not set to open until July 2018, seven months later than the original January 2018 deadline originally proposed in the referendum. A marijuana panel was created and designated with the responsibility of ironing out any issues that the law might impose on the commonwealth, but four of the five people appointed by Governor Charlie Baker to the panel voted against marijuana legalization. Another difference between the law passed in Massachusetts and other states that have passed recreational marijuana laws, such as Colorado, is that towns in Massachusetts can opt out of allowing dispensaries, causing an atmosphere of “not in my backyard” mentality.

As of now, it is still illegal to privately sell marijuana in Massachusetts without a license, but a citizen can grow a certain number of plants and carry the substance on their person.

Needless to say, the man who was selling pot out of this tent did not have a license.

“As long as you don’t carry it in the open or smoke it outside of the park, the police won’t bother you,” he said.

While the law  says that smoking marijuana in public is and will remain illegal, police were not arresting anyone. The officer said that there were too many people to make it worthwhile and that the police were just there to ensure the safety of those in attendance. The money and resources put into the ambulances, police officers and other law enforcement that surround the outskirts of the park appeared to be wasteful. No fights occurred and no hospital transports were needed.

Old hippies selling pot out of tents was not the only way a person could buy the substance that weekend. A green truck that sold marijuana infused foods had a line with a 45 minute wait. Brownies, lollipops and packages of gummy bears were sold at tables not far from a stage that hosted live music. Vendors were offering bong rips for $5 a piece.  Almost every food truck in the city was lined up in orderly fashioned for when the munchies kicked in.

Cannabis itself was not the only product available at Hempfest that weekend. Tie-dye tapestries, marijuana themed t-shirts and paraphernalia were also available for purchase.

Tourists and parents were not as enthusiastic about the festival. It was obvious that not everyone was made aware of the festival. Joggers were seen trying to struggle their way through the common, tourists were asking police officers a multitude of questions and disapproving residents  looked in disgust from across the street.

According to The Heights, Boston College’s student run newspaper, the organizers of the event have had to sue the city of Boston six times in the past 28 years to obtain the permit for the event due to complaints from residents. The courts have ruled in favor of the festival all six times.

As legislation continues to be held up at the Massachusetts State House, it is expected that hempfest and its supporters will continue to gather at Boston Common every September to peacefully protest their right to light up.