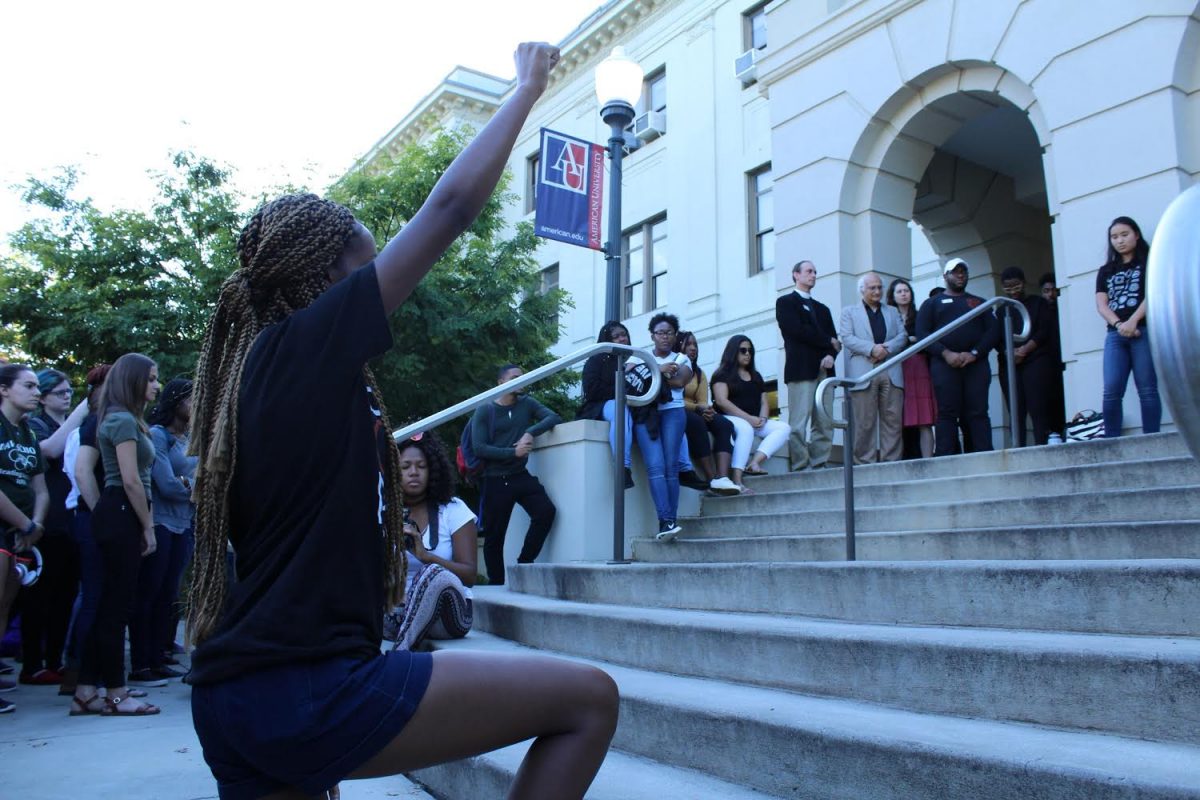 Student kneeling outside with a fist raised in the air outside of MGC during the rally.

“Enough is enough” chanted a crowd of around 200 people on the steps of the Mary Graydon Center late Friday afternoon, two days after 10 posters of the Confederate flag with cotton attached to them were found by students and university police.

The protest called “Enough is Enough: Rally for Courage Against Terror” was held in response to the 10 posters that were held on campus. The posters were found at the Mary Graydon Center, Battelle-Tomkins, Kogod School of Business and Mckinley Hall. An email was sent out by Dumpson, encouraging students to attend the rally.

The posters were hung the same night that historian Ibram Kendi was giving a presentation at the opening of American University’s new Anti-Racist and Policy Research Center.

Kendi, a professor of history and international relations at the School of International Service, has written numerous books about racism in America.

“If these people think that some cheap photocopies of confederate flags and your mama’s cotton balls are gonna intimidate folk, then then they have another thing coming,” Kendi told the crowd.

“It is time that we send a message to those who seek to inflict acts of harm and terror on our campus and our communities. Enough is enough,” Dumpson said, wearing a pink skirt and a Black Lives Matter t-shirt.

Kondwani Fidel, the author of Raw Wounds and a poet, gave an emotional speech about his childhood growing up in Baltimore.

“We were harassed so much by police when we were young that we thought it was legal for them to beat our ass,” the Baltimore native said.

“In the words of Huey P. Newton, the revolution has always been in the hands of the young. The young will inherit the revolution,” Fidel said. “I say that to say as young people, yall got plenty of work to do.”

As the protest was underway, a group of prospective students were touring the campus.

“I’m not having second thoughts about applying,” said Quentin Harris, a high school senior from Boston who was on the tour. “The news caught my attention, but it’s not affecting my decision to apply, I really like the school’s location and campus,” Harris said.

Harris, who is considering majoring in African American Studies, said that racist incidents are happening all across the country, and that the problem is not unique to AU.

A total of 154 incidents of hate speech have been confirmed since last fall by Documenting Hate, a project established by ProPublica to report and confirm hate crimes on college campuses. The incidents have been reported at large state schools to small liberal arts schools.

AU was the victim of another hate crime last spring when a suspect still at large hung bananas from nooses on the day Dumpson, the first Black student government president, took office.

Although the words of today’s rally was encouraging, freshman Jaydah West says that people at AU unintentionally make people of color feel uncomfortable.

“I have this white professor whose a women and always talks about racial issues,” West said. “When she talks about oppression and racial issues she always stares at me for approval. Just because I’m Black doesn’t mean you have to stare at me and nod your head when you talk about race,” West said.

Dumpson and the AUSG has demanded a list of changes from AU administrators including changes in how hate crimes are dealt with and a multicultural student center.

Dumpson also made clear that the space would not only be for minorities, but that it would be open to everyone.

AUSG and Dumpson want to see bias related crimes as a separate violation with its own punishments, including expulsion, to be added to the student code of conduct.

“Bias related incidents are only aggravating factors,” Dumpson said. “If you commit a university violation, for example, write the N-word on a wall, it’s an aggravating factor but it’s not a stand alone crime and doesn’t have consequences on its own.”

The recent events on campus have made some students feel as though the campus had grown closer since the hate crime.

“The events on campus takes away the partisanship aspect of the political climate on campus and it goes beyond party politics. I think it brings the community closer together,” freshman Alyse Lord said.

The suspect, like the perpetrator on campus last semester, remains at large with few leads as to who he is and why he did it.