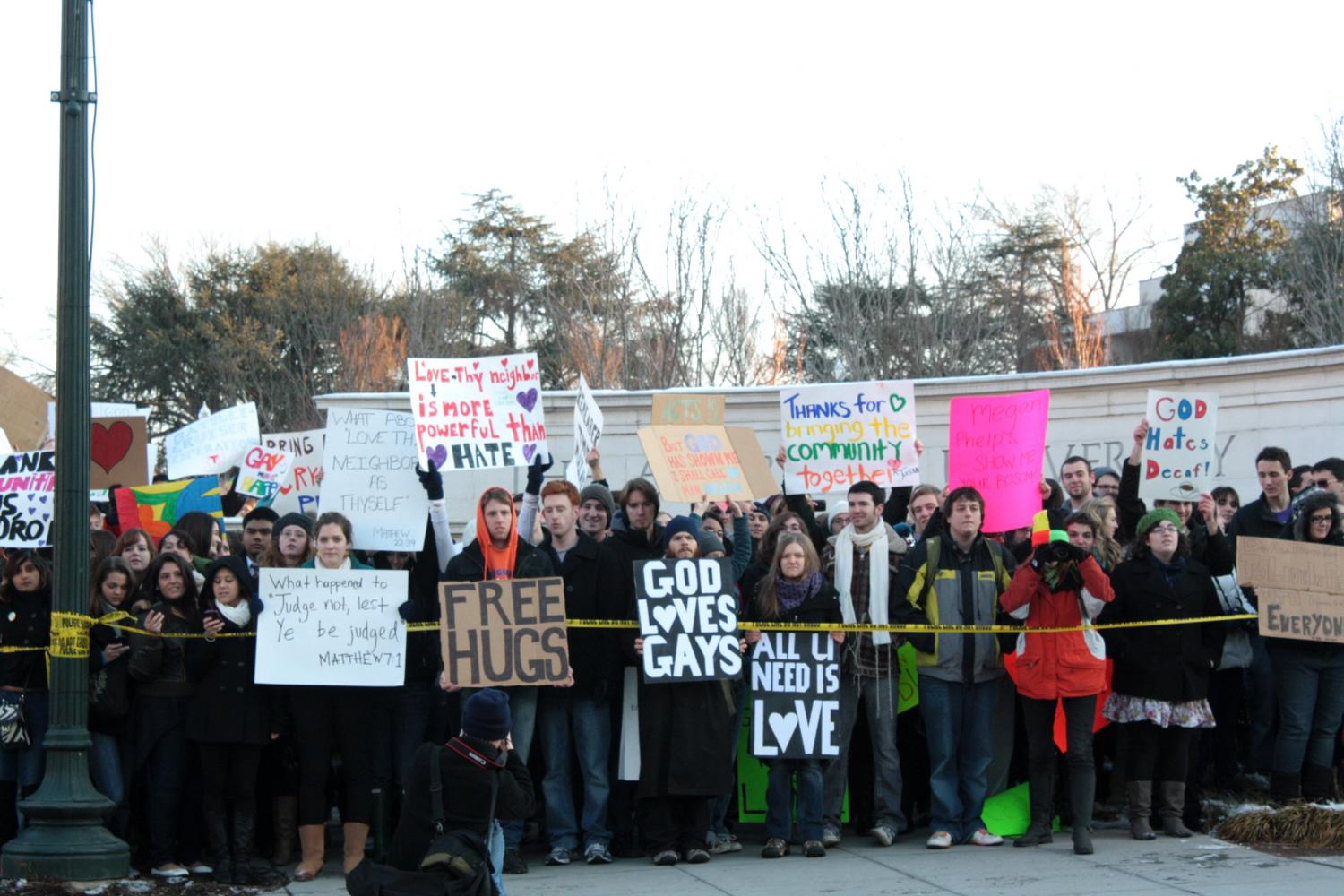 AWOL
For one family, the Kansas-based Westboro Baptist Church has quite a reputation. The Phelps family’s anti-gay crusades have hit over 40,000 sites since 1991; the church was at American University today to protest the school for being, in their words, “fag-infested” and “pervert-run.” AU students organized a “Rally to Reaffirm Sanity” in response to the protest, replete with a cappella performances, hot chocolate, and a battalion devoted to giving “consensual” free hugs.

The event was intended as an affirmation of tolerance and unity. “We are not here because of Westboro Baptist Church,” said student government president Nate Bronstein. And while the banner below the podium suggested the same, it also claimed that the event was the “Westboro Baptist Church Counter Demonstration.” Four members of the Church came, and about 1,000 members of the AU community showed up in response. Here are a few quotes we gathered from the event:

“I stand with my peers around the nation, committed to protecting our rights and promoting tolerance.” -Nate Bronstein, student government president.

“Obey. Put away your sin and obey.” -Marge Phelps, protester.

“We’re not here to parlay with you fools. You either hear this word and repent and obey, or you go to hell. I don’t care!” -Jonathan Phelps, protester.

“They pretend that they talk to God and they hear from God that he hates gays, but like really how would they have any idea, if God makes us all beautiful people?” -Clay Miller, 17, from Rockville.

“It would be sad to know that you hate eight million people in the world.” –sophomore Rebecca Borton.

“This is a love-in, not a hate-in. I’m glad we could be on this side.” –Joe Eldridge, AU chaplain.

“I came for the hugs.” –freshman Justin Kiel.

“I feel that you lazy turds need to get more of those people out there. I’m getting tired of coming to these events, piddly little crowds show up. I need some serious population to preach to. That’s what I need.” -Jonathan Phelps.

“I think people are going to look back on our generation like they do the sixties with the civil rights generation. This is what we have to do to make the next generation better, you know?” -Clay Miller.

“We embrace everybody as they are and we want them to feel included as part of our community. If one part of us is threatened, we will all rally around them. I think it’s really important that we did do this, to show that we won’t be pushed around.” –Christian Kingston.