One Man's Crusade Against the Vatican: Protesting Pedophilia 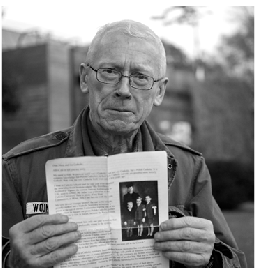 John Wojnowski is the man who can’t be moved. He’s the man on the corner, the one holding his sign in front of the Apostolic Nunciature, unofficially referred to as the Vatican Embassy. He’s been standing on the corner of Massachusetts Ave and 34th St. NW every evening for nearly 16 years, staging his own silent crusade.

“My life was ruined by a Catholic priest,” Wojnowski explains, shrugging his surprisingly thin shoulders. You would never guess from looking at him that Wojnowski holds a banner that is wider than he is tall every day. Or that he has been holding it every day for nearly 5,000 days.

He’s a small and thin man. He puckers his lips and gets a faraway look in his eyes when he talks. “I’m the shortest person in my family,” he explains in his Polish accent. He continues,  “Everyone else, my brother, my father, they are 6 feet tall.” He believes that the shame and the secret physically stunted him. He used to carry around before and after photos. Before, when he was ashamed of himself. After, when he became a modern crusader, full of pride and purpose. Look, he would tell people, shame can destroy people, it can diminish them.

As a teenager Wojnowski was molested by a Catholic priest. He repressed the memory for 39 years.

In 2004, the US Conference of Catholic Bishops commissioned a report to investigate claims of abuse and cover up. The John Jay Report used voluntary and anonymous surveys of the Roman Catholic diocese to find that in the United States, 10,667 allegations of sexual abuse of a minor had been made against 4,392 priests over a 52 year period. Of these priests, over half had one allegation against them already. About a third had two to three and nearly 14 percent had four to nine. Three percent percent had 10 or more allegations against them.

John Wojnowski has been standing outside the Vatican Consulate everyday, with a sign, for seventeen years. “I’m not a very good writer, so this is how I share my message,” he says.

The reason, Wojnowski said, is “the shame, you can’t imagine. It is all consuming.” And, as Wojnowski put it, it ruined his life. “My wife, she suffered the most. My wife and my children,” he said. “I used to think that some people were happy and some people were sad and that I was a sad person.”

For 39 years, he was simply sad, sad, quiet, and, most of all, ashamed. He didn’t know why he felt this sadness and shame, so he assumed that he just couldn’t feel anything else. His wife left him, and his children grew. He felt alone. He was alone.

Then, one day, he was listening to a radio story about a priest in Texas who had been accused of sexually molesting children. And something clicked. He started to remember—he still doesn’t know exactly what happened all those years ago, but he knows he was molested. It made sense; he had been molested and that was why he felt so alone, so sad, why he was unable to open up, to trust.

Wojnowski didn’t know what to do. So he wrote a letter to the parish he had grown up in. He gave his name, described where his family had gone to church and everything he remembered. He said he felt so ashamed when he wrote the letter. He remembers trembling when he signed his name.

He received no reply.

He wrote again. And once more. Then he went to speak to the man he had been writing to in person. Finally, he was told something. He was told that the priest in question had died. There was nothing to be done.

A few days later, he went to the corner, standing there with his sign: MY LIFE WAS RUINED BY A CATHOLIC PRIEST. He still felt like he was choking on shame, but he didn’t think there was anything else to do. Every time that someone honked or gave him a thumbs up or a peace sign he would burst into tears.

For the most part, the men at the Nunciature ignored him at the beginning. But one day, a man came out to speak with him. He walked up to Wojnowski and told him four reasons why Wojnowski should stop: The Italian statute of limitations was up, it was his fault he’d gotten molested, if he continued, he’d be crushed by ridicule, and U.S. laws are far too harsh on child molesters. The man told Wojnowski that there was nothing to be done and that nothing should be done. Then he spit in Wojnowski’s face.

Wojnowski wanted to cry, but not with happiness the way he did when someone honked. He wanted to curl up in a ball. He wanted to leave and never come back. But he kept standing there, holding his sign.

Sixteen years later, he still stands there every day. The message has been updated. Now one side of his sign declares CATHOLICS ARE COWARDS. The other delares VATICAN HIDES PEDOPHILES. The updates haven’t changed the core idea—that Wojnowski will not put down his sign. “I’m a poor, ignorant peasant fighting this global institution,” he said. “If a person has a drop of honor, he cannot give up.”

David Clohessy, the director of SNAP (Survivors Network for those Abused by Priests) told The Washingtonian that because of this resolve, Wojnowski occupies a singular place in the survivor’s movement. Clohessy believes Wojnowski is making a difference.

“I’m a poor ignorant peasant fighting this global institution. If a person has a drop of honor, he cannot give up.”—John Wojnowski

Clohessy said, “I suspect that every single day, given the magnitude of this crisis, someone in that office is making some decision relative to abuse and cover-up, deciding whether and how to respond to the bishop who asks for their guidance on whether this perp should be moved or demoted or defrocked. Within hours or sometimes probably minutes of making that decision, they’ve seen John. That can only, only help.”

Child molestation cases are unfortunately pervasive. They’re often covered up and forgotten, left to fester in secrecy. We’ve forgotten that there are people behind the statistics. We’ve forgotten the horror, the emotions, the terrible shame involved in these cases. Wojnowski is here to remind us. There are many survivors who are still suffering today, who are still asking the Church for recognition, for recompense, for simple investigation. Whatever it takes to put back together a life diminished by shame.